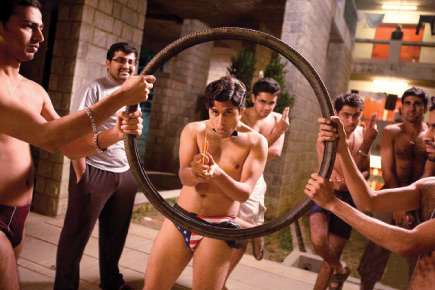 Omi Vaidya, a Los Angeles-based actor of Indian origin, who plays the fourth idiot in 3 Idiots, talks to Open.


Some say the film should have been called 4 Idiots. Why? Because the fourth idiot in the film, played by Los Angeles-based actor of Indian origin Omi Vaidya, is a crackerjack piece of comedy. His role as ‘Silencer’ Chatur Ramalingam has a high point in the film: an outrageous Annual Day college speech, which is making waves on the big screen and online. Indeed, a Facebook page called ‘Silencer Chatur’s Balatkar speech from 3 Idiots’, dedicated to those four mad minutes, has 153,937 fans and counting. This rib-tickling piece of footage has Omi Vaidya’s character, an NRI geek student, sincerely believing the Hindi word ‘chamatkar’ (miracle) means ‘balatkar’ (rape).

Q How many takes were there for the balatkar speech?

A Well, there were several retakes. We had to take in the audience response, too. As we did our retakes, the IIM Bangalore audience just kept erupting [with laughter]. I can’t remember how many times I must have said it.

Q Be honest. Weren’t you, at any moment, close to breaking out in laughter yourself?

A Frankly, no. It’s because I’m a trained actor and I put myself in a zone where I absolutely believed what I was saying was right. In that moment, I am completely convinced ‘balatkar’ means ‘chamatkar’. The IIM audience going crazy only made me believe doubly more that my speech in the film is one of total belief in what I’m saying.

Q Was there any improvisation in the scene?

A A little bit due to my unusual accent. But otherwise, it was a superbly written piece. Duh writing jus didh ith (in his own accent).

Q Ok, what’s the meaning of the word balatkar?

A Hahahahaha. Yeah, I know.

Q How did you prepare for the role?

A I began with training in Hindi through Hindi classes. But through the filming, Raj bhai (director Rajkumar Hirani) told me to stop speaking in Hindi, stop changing my accent and stop watching Hindi movies. He wanted my own individual accent and persona to remain. He also told me to stop working out as my character had to put on weight later on.

Q The balatkar speech has 150,000 members on a fan page in Facebook dedicated to the scene…

A Wow. Is that so? That’s crazy. I think this character and the film have really connected.

Q Is this the finest piece of acting you’ve done so far?

A I‘ll have to say, yes. Also the most challenging. I memorised the speech over and over again.

Q A bit about yourself Chatur, I mean Omi…

A Heh heh. I come from a Konkani family from Bombay. Though I grew up in LA, we’d come to India every year for three months. We speak Marathi at home. I’ve done theatre and TV shows in the US and some films in Hollywood.