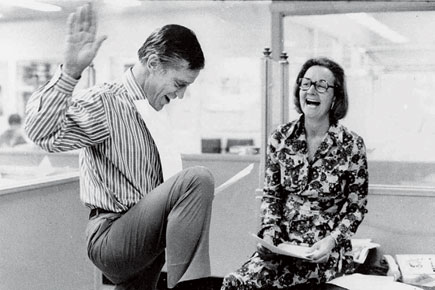 There are infrequent moments when a newspaper’s course melts into the course of history. For instance, on 13 January 1898, the writer Émile Zola wrote a letter to the French President on the cover page of L’Aurore under the headline ‘J’Accuse’. He listed the flawed evidence that led to the imprisonment of an army colonel, Alfred Dreyfus, for spying. Zola charged that Dreyfus’ only ‘crime’ was being Jewish. Zola was also sentenced, went into exile but the ripples of that article led to Dreyfus’ release, an overhaul of the French army and the country confronting its anti-Semitism.

In modern newspaper history, it has been the publication of the Pentagon Papers and the Watergate scandal in the early 1970s that changed the definition of press freedom. Both had their own stars in the form of Daniel Ellsberg, who leaked the Pentagon papers, and the reporters Bob Woodward and Carl Bernstein who uncovered Watergate. But the man who they submitted their exposes to and who decided that this was an issue worth fighting the US government over was The Washington Post Executive Editor Benjamin C Bradlee, who died on Tuesday at the age of 93.

Watergate is more famous, but for an editor, the Pentagon Papers expose was riskier because it would mean flouting a court injunction for a principle. The Papers were a study by the US Department of Defense on the Vietnam War that detailed a history of covert aggression against the country despite the routine denials of US leaders.

After The New York Times started publishing the papers leaked by Ellsberg, the government managed to get a court injunction against it. That was when Bradlee, who also got the papers from Ellsberg, decided to carry them in The Washington Post in violation of the order. It was a test case on the public’s right to know versus the State’s right to secrecy. It moved to the Supreme Court, which said it was the duty of a free and unrestrained press to challenge any government deceiving its people.

In Watergate, burglars had entered and bugged the Democratic Party office with the knowledge of US President Richard Nixon. Overseen by Bradlee, the steady stream of exposes by Woodward and Bernstein led to Nixon being forced out of office. Speaking to CBS News after Bradlee’s death, Woodward said he was probably the greatest editor of the 20th century because he created an atmosphere in the Post’s newsroom about there being “mysteries out there, things we don’t know about, we are not getting to the bottom of… so we have to keep digging at it.”

When Bradlee was appointed the Post’s assistant managing editor in 1965, it was a regional daily vying with local rivals. In a few years, he’d turned it into a vigorous institution with pan-American and later global influence. ‘He achieved that goal by combining compelling news stories based on aggressive reporting with engaging feature pieces of a kind previously associated with the best magazines,’ wrote the paper of him.

He was a reporter’s editor who had served in World War II and also had an understanding of the government because he had been part of its propaganda division. He then turned to journalism, beginning as a correspondent for Newsweek, which was bought by the Post, his next employer (and so till he retired).

As an editor, Bradlee resisted all phony attempts to invoke ‘national security’ as a pretext to muzzle the press. And he had a journalist’s sense of scepticism. In Woodward’s words, “He didn’t believe the first version, the second version… when you got to the tenth version he might say ‘okay’. One of his favourite lines was ‘The truth emerges but slowly.’”