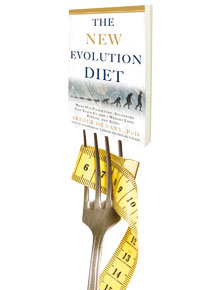 It’s that month of the year, when diet books sell faster than French fries.


It’s that month of the year, when diet books sell faster than French fries. Here’s one written by a 73-year-old man, hailed by one newspaper as ‘Superman’s slightly fitter granddad’. Arthur De Vany’s slimmer’s guide that’s just hit bookstores in America is called The New Evolution Diet: What Our Paleolithic Ancestors Can Teach Us about Weight Loss, Fitness and Aging. And it’s telling us to follow our own genes. How intuitive is that? Well, you’ll know when you start hunting and foraging like a Palaeolithic foodie. De Vany suggests you scrounge for raw foods, which should be one third of your intake. The book has a foreword by Nassim Nicholas Taleb, who wrote The Black Swan. Try it, if you’re willing to live like an unsuccessful hunter—that is by fasting when your stone tools miss their target.