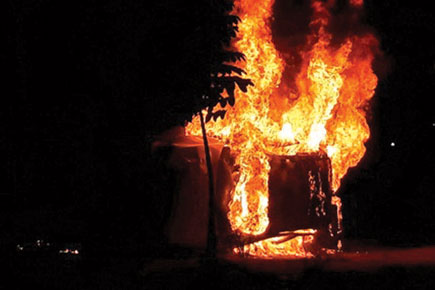 India might be not just intolerant but also barbaric, given the absolutely shocking racist behaviour of an angry mob in Bengaluru. On Sunday, a vehicle driven by a Sudanese national hit a 35-year-old woman, killing her. Half an hour later, when another vehicle carrying four Africans passed by, the crowd that had gathered forcibly stopped it and dragged them out. Their car was set ablaze (in pic) and they were beaten mercilessly.

A Tanzanian woman among them was stripped and paraded naked. And this was just the start of her ordeal. When she ran and tried to board a bus, the passengers threw her out. At the local police station, her complaint was not registered, and the cops even demanded the she produce the hit and run driver. The victims had no connection whatsoever with the driver, the only thing common being their African origin. Would the crowd have done the same thing if it were Europeans or Americans instead of Africans? Most probably not.

The racism that African students face in India is no secret, and while it is usually subtle in its effect, an outrage in broad daylight like this bares itself in its full evil glory. The only answer to this is to give exemplary punishment to those who assaulted the Tanzanian woman so that it serves as a deterrent to racists in this country.