Chandrayaan’s find has suddenly raised the possibility of life elsewhere that much higher. 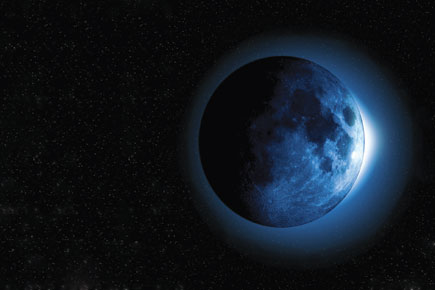 Not since Neil Armstrong’s small step has any scientific lunar mission had the impact as significant as that of Chandrayaan.


Not since Neil Armstrong’s small step has any scientific lunar mission had the impact of the Indian probe Chandrayaan with its discovery of water on the moon. It will change the way humans will go about exploring space, and it has already changed our view of a substance we thought we knew better than any other—water.

Historians well know of the blindness that comes with assuming that the mores of our time and place apply to the rest of humankind, but that we should have been blinded in our chemistry is a surprise of quite another magnitude. The mechanism for water on the moon that is now being advanced, thanks to Chandrayaan, is simple enough. If so, water may be far more ubiquitous across the universe than we had supposed, and life, so contingent on water on our planet, may not be quite as miraculous as we had presumed.

It is now suspected that hydrogen ions from solar wind strike oxygen-rich rocks on the moon to produce water. It is a reaction that requires harsh radiation to trigger it off. But such conditions should be present often enough in planetary systems and would suggest that it is precisely at those places where we would have least expected water, barren rocky planets and satellites without an atmosphere, that we may now find it.

Chandrayaan’s findings are based on the NASA instrument—M3 or the Moon Mineralogy Mapper. It was meant to study the sunlight reflected off the moon’s surface for a typical signature that is a confirmation of the presence of water.

This confirmation led scientists to re-evaluate data that they had already obtained but not analysed in detail. The spacecraft Cassini that has provided spectacular images from Saturn and its moon Titan had flown past the moon ten years earlier. Data now examined showed it had picked up the same evidence of water on the moon’s surface. The M3 team then also requested that the NASA Deep Impact Spacecraft focus on similar observations of the moon as it heads out to a rendezvous with a comet in 2010.

Not only did Chandrayaan and the subsequent observations confirm the presence of water on the moon, they also yielded two rather significant observations. One was that the trace of water on the moon’s surface is higher when the sun is low on the horizon than it is at lunar noon. These findings strongly suggest that water is constantly forming and evaporating on the moon’s surface, strengthening the case for water being produced through the mechanism involving solar wind.

The other was that the water trace is much stronger at the lunar poles than the equator. According to geologist Carle Pieters of Brown University in Rhode Island who led one of three teams that contributed to the publication of these finds in the journal Science, “If the water molecules are as mobile as we think they are — even a fraction of them — they provide a mechanism for getting water to those permanently shadowed craters. This opens a whole new avenue [of lunar research], but we have to understand the physics of it to utilise it.”

According to Chris Welch, astronautics and space systems expert at Kingston University London’s Faculty of Engineering, “The water is thought to exist as a very fine film covering the particles of the lunar soil, or as groups of molecules, not as a liquid. You couldn’t drink it in its current form, but if extracted, then you certainly could. It has been suggested that one cubic metre of soil might provide one litre of water.” That though is much less than it sounds; at a litre to one tonne of soil, the Sahara is much wetter.

The detection of water on the moon now takes astronomy a full circle. Early astronomers peering through a telescope had speculated that volcanic craters on the moon’s surface were actual seas and hence were termed mares, Latin for sea. The first moon landing coincidentally took place in the Sea of Tranquility, one of the many craters imaginatively named by the 17th century Jesuit Giambattista Riccioli.

The series of moon landings should have been able to detect water on the moon, as some of the rocks brought back by the Apollo mission were found to be damp. But so sure were people then of the absence of water on the moon that this was believed to be ‘contamination’ in the laboratory on earth. The same certainty ensured that the Cassini data available for a decade had not been mined for evidence of water on the moon.When Chandrayaan was launched, NASA had this to say of the M3: ‘It is a state-of-the-art imaging spectrometer that will provide the first map of the entire lunar surface at high spatial and spectral resolution, revealing the minerals of which it is made. Scientists will use this information to answer questions about the Moon’s origin and development and the evolution of terrestrial planets in the early solar system. Future astronauts will use it to locate resources, possibly including water, that can support exploration of the Moon and beyond.’

Note how the search for water is mentioned in passing. Clearly, NASA had no choice given the prevailing view of space exploration as a practical business that should justify itself in some concrete cost benefit terms for a government sub-committee. If they would have come out and said they were funding a long shot to find water on the moon, the project would never have taken off.

In the same way, Isro with some justification can claim that Chandrayaan’s great find is a vindication of their approach, a focused step-by-step exploration of space that has been extremely sparing in terms of money spent. But the truth is that science has always been propelled by the imagination. Those who want to focus on the here and now and use practicalities to value science often forget that science follows a logic of its own. To try and impose a cost benefit analysis is to suggest we can anticipate the outcome of exploration, which is an activity that the human imagination must fund for its own sake.

It is worth remembering that in December 1831, a ship sailed from England with the avowed aim of a hydrographic survey of the coasts of the southern part of South America as a continuation of the work of previous surveys, producing charts for naval war or commerce and drawings of the hills as seen from the sea, with height measurements. Its aims sounded as prosaic as Nasa’s description of the M3’s work.

On board that ship was a young man who had to pay his own expenses to serve as an expert on geology. His name was Charles Darwin and we are this year celebrating the 150th anniversary of the Theory of Evolution that was born on board the Beagle.

Chandrayaan may not seem like the Beagle, but several centuries from now, this discovery in its own way could be remembered as being no less momentous. Today, the possibility of life elsewhere has suddenly become that much greater. From life on earth to life in the universe is a quest Darwin would have undoubtedly supported.