Craig Venter may not have created artificial life, but what he has done may be at least as significant. 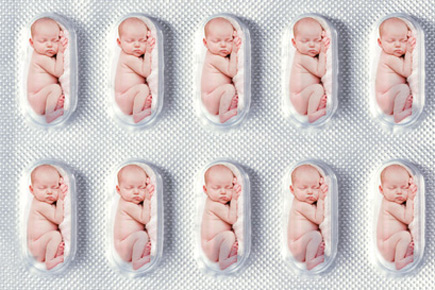 Craig Venter may not have created artificial life, but what he has done may be at least as significant.


Take a computer. It is usually made up of a keyboard, a monitor and different kinds of memory storage and processing devices, but it is not worth much without a software program to run it. In most cases, we know this basic program as an operating system. It is this operating software, a digitally encoded pattern, that ultimately determines what use the hardware that makes up a computer is put to. The same kind of hardware, depending on its program, could navigate a car, plane or missile.

Now take a cell or bacterium. It is usually made up of a cell wall, an energy generating mitochondria and protein synthesising ribosomes, but all this is not worth much without the DNA (or in some cases RNA) that programmes it to do things. It is this DNA, a genetically encoded sequence, that runs a cell and ultimately determines what use the hardware that makes up a cell is put to. Basically the same hardware, depending on the DNA embedded within, could photosynthesise sunlight, cause plague, or aid digestion.

What Craig Venter has done is to create an artificial genome—a complete set of genes—that takes over a host cell and reproduces. The American biologist, with Hamilton Smith and other colleagues, has done so by replacing the DNA of the host by DNA made in a lab. In other words, he has re-programmed the cell. So Craig Venter has not synthesised life in the form of a living organism, which would have meant creating an entire cell from scratch. Rather, the American biologist has done something that is at least as significant. He has shown us how to hijack life.

The implications are enormous. The complexity of design that we see on earth, be it the human eye, the cheetah’s stride, the peacock’s feather or an elephant’s trunk, has all arisen as a result of variations in organisms being naturally selected to increase fitness in their immediate surroundings. Features that help an animal survive and reproduce are what are passed on.

It is not that we have not tampered with this process before. Domestication, for example, was an early way of turning it to our ends. Modern canine and wheat varieties exist because we have artificially selected certain traits. Without human intervention, it is almost impossible that either could have evolved. We did this by changing the rules of survival. Preferred variations were allowed to carry on to the next generation, which means these species were not responding to a wild environment but a human one. So they are actually the first examples of a certain kind of artificial life as opposed to a natural life that evolved without human intervention.

Still, we could only select for variations that were actually expressed. There are no green dogs because there was never a green dog ever born. If a variation could occur once, we could at least hope to propagate it by selecting it, but we could not hope to create a variation that did not exist. In some ways, for all the controversy, genetic modification (GM) was only the next major step in this direction. In fact, if not quite a green dog, we could hope to make an organism express traits that exist in another organism. Many vaccines are manufactured this way today.

Craig Venter has moved beyond genetic modification by demonstrating the possibility of creating an entire new genome. Instead of just splicing a genome to modify the program, we can in effect re-programme the cell or organism. If artificial selection changed the rules of survival to preserve some variations that would have otherwise died out, by tapping the genome, Craig Venter has been able to reach the very source of variation. Variations never expressed in the natural world can now be designed for. This is not artificial but synthetic life.

The usual arguments over tampering with the genome are sure to start again, and in some ways they are rather tiring. Among protestors, there is a strange coalition of environmental and anti-science rhetoric, at the extreme end of which lies opposition to all GM technology. At times, the opposition comes from those who may be using insulin or vaccines produced by exactly such means. And as a result of this tendency, we are left with a meaningless debate instead of addressing such valid concerns as how GM technology should be regulated, what kind of testing procedures should be put in place, who should direct GM research, and what the priorities for such research should be.

Noises against Craig Venter have already erupted. But just as the threat of computer programs directing nuclear missiles can hardly be an argument against digital technology per se, the threat of DNA misuse can hardly justify a ban on genetic technology.

Craig Venter himself has taken another tack, arguing that GM technology offers an immediate route to limitless biofuel made by organisms, the invention of which could defuse the planet’s carbon crisis by switching away from fossil fuels. It is a proposition hard to resist.

While it may not be a good idea to contradict Craig Venter, who has often proved critics wrong, the reality is likely to be different. The process of finding genomes that can actually do something ‘useful’—for good or ill—is not likely to be easy. Nonsense genomes are far more easily designed than useful ones. The first steps are going to be incremental, not too different from what is being done with genetic modifications already.

The hype of quick results is premature, as past experience shows. GM technology, for instance, has not delivered an end to the world food crisis, nor is it likely to in the near future. The process of developing GM technology is expensive and requires expertise. As a result, it has become the avenue of big private players who prize secrecy and pursue ends not necessarily in tune with the public good. As with drug testing, Indian needs are unlikely to be met in a hurry by such firms. As always, we can expect the government to step in only once it is too late.

In itself, Craig Venter’s success in recreating the genome of the Mycoplasma mycoides (that causes mastitis in goats) in the laboratory is historic. He and his team have done so starting from basic chemicals. Appropriately enough, they have watermarked this genome with a sequence from James Joyce that reads ‘to live, to err, to fall, to triumph, to recreate life out of life’.

But in this triumph, the road to erring is not far. Already, a controversy has broken out over Craig Venter’s attempt to patent his work—the artificial organism nicknamed Synthia. Ten years ago, while he was at the forefront of the effort to sequence the human genome, a similar battle was fought when he sought to patent certain aspects of his work. At the time, transparency in science won out and the entire data was placed in the public domain.

The same battle is now being played out. It is only a part of a larger debate about patents in science, especially biology and medicine. There are no easy answers. Incentives are important. Without guaranteed returns from work that takes large investments, no such new research may occur. On the other hand, some of this work is far too important to be allowed to operate outside the transparency norms that guide basic scientific research. Most of us would argue that synthetic life certainly qualifies as a matter of common interest, and should be kept open to public access, scrutiny and control.

The dangers being expressed about our ability to ‘play God’ have never stopped research, and won’t now. The news release from the J Craig Venter Institute announcing the ‘First Self-Replicating Synthetic Bacterial Cell’, ends with the words: ‘The ability to routinely write the software of life will usher in a new era in science, and with it, new products and applications such as advanced biofuels, clean water technology, and new vaccines and medicines. The field is already having an impact in some of these areas and will continue to do so as long as this powerful new area of science is used wisely. Continued and intensive review and dialogue with all areas of society, from Congress to bioethicists to lay people, is necessary for this field to prosper.’ Life forms with an interest in artificial life should hold him to these words.