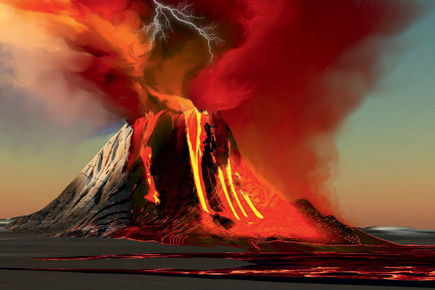 
If you were shocked that something could make dinosaurs extinct 65 million years ago, you should have been there 252 million years ago. Among extinction events (the term under which these monster catacylsms go), that’s the grandfather. It is called end-Permian mass extinction, which brought life almost to a stop. In the oceans, by one estimate, 96 per cent of all fauna disappeared never to return. The reason you see so few marine organisms with skeletons is that they were all wiped out. Their dominance of the waters was taken by the little survivors like fishes and crabs. Seventy per cent of everything on land also became extinct. And the cause for all this devastation? The most widely accepted hypothesis is that it was set off by supervolcanoes in Siberia, which led to an increase in carbon dioxide, leading to global warming, leading to acid rain and the oceans becoming anoxic or shorn of oxygen.

What the scientists Zhoing-Qiang Chen of the China University of Biosciences and Micheal J Benton of the University of Bristol set out to study was how long it takes for life to return to normal on earth after an event like that. In a paper just published in Nature Geoscience, titled ‘The timing and pattern of biotic recovery following the end-Permian mass extinction’, they arrived at a number: 8-9 million years.  Life began to claw its way back almost as soon as the conditions became slightly better but then the environment hit back and set more species packing into extinction. It was a relentless struggle to reach equilibrium point. The authors wrote in the paper, ‘The recovery of life began rapidly, within the first 1-3 Myr (million years) of the Triassic…This early phase of recovery was short-lived for most groups…’

To ascertain the timeline of the recovery, the authors studied the fossil evidence of the period from south China, where as many as 20,000 specimens exist. Once the recovery happened, some interesting new residents arrived on earth. Frogs for one. And the earliest ancestors of the dinosaurs—dinosauromorphs.