Food Coupons for the Faithful 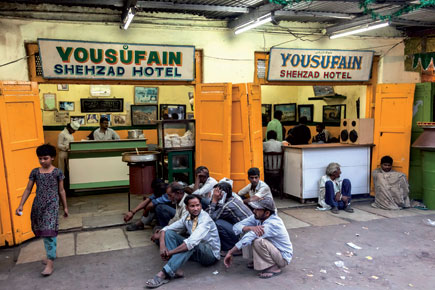 Syed Nizamuddin, A 20-something, is hunched on his knees in front of a busy eatery in Nampally, a crowded locality on the periphery of the old city in Hyderabad. He is part of a dozen other men squatting in similar fashion in front of the Yousufain Shehzad Hotel, a brightly- lit joint in the bylanes around the Hazrat Yousufain Dargah. Nizamuddin, a daily-wage labourer, is here because he hasn’t found work today. He is depending on the kindness of a devotee to feed him.

His prayers are answered quickly enough. Mohammed Khaled, the 36-year-old affable hotel owner, gestures towards five of them to come in and take their seats. A devotee has just paid to feed five people but what is interesting is the manner of this charity. “[Devotees] buy coupons from our hotel to feed the poor. Coupons of Rs 12, 16, 20 and 30 denomination are always bought in odd numbers like three, five, 11, 21, 51 or 101. It’s a matter of faith, a tradition dating back over 50 years with those visiting the Hazrat Yousufain Dargah,’’ says Khaled.

Nizamuddin grabs a wooden chair gratefully and is served naan, salan (pieces of meat in a watery gravy) and rice. Other paying customers share his square marble-topped table. “There is no discrimination as these people are not beggars. They are poor and hungry,” says Khaled.

Mohammed Ibrahim, a retired policeman, is one of those who feeds people regularly. “I have been coming here since 1992, and now pay the hotel a monthly sum of Rs 250 to serve food to the needy,” he says. Even as he speaks, more people join the queue outside. Narasing Rao, a 40-year-old daily wage earner who is originally from Aurangabad, is also among them. Rao says he knows where to get a hot meal on a day when he doesn’t get to earn his living. The smell of freshly- cooked food wafts through the narrow congested bylanes.

A hotel worker says that from 7 am to 11 pm, these coupons can be exchanged for naan, roti, salan, rice, sabzi, biryani, even a badushah, a melt-in-the mouth sweet delicacy. The coupons have no expiry date and can be made use of any time.

Khaled recalls his father, who started this hotel on the dargah premises 70 years ago, saying that this feeding of the needy began half a century ago. “I have myself seen it for 30 years; the tokens were then worth Rs 2, 3 and 5. We do manage in these times of price rise to still offer a decent meal to satisfy a soul,” he says.

Yousufain Dargah or Yousuf Baba Sharif Baba Dargah is where two Muslim Sufi saints, Hazrat Syed Shah Yousufuddin aka Yousufain and Syed Shah Sharifuddin lie buried. They are said to be Aurangzeb’s army commanders who helped him conquer the Kingdom of Golconda. They stayed back in Hyderabad after the conquest and turned to spiritualism. Devotees of all communities believe that praying here cleanses the soul. After prayers, they invariably troop to Yousufain Shehzad Hotel. The busiest days are Thursdays and Fridays. As many as 500 devotees buy tokens then, and there is a lengthy queue of people waiting for their turn to have a meal.

Asked how he manages, Khaled says the hotel pays lower rent than the market rate in the area. This is because it is located on the dargah’s property. The dargah does not run a kitchen, and, in a sense, the act of feeding the poor has been outsourced to the hotel. There are some who buy the coupons and distribute them to those waiting outside; others only pay for coupons and let hotel staffers call in those waiting. Yet others are like Ibrahim who maintain a monthly account with the hotel. His is account No 333 in the Shehzad Hotel register. He turns up whenever he detects an ‘inner calling’ and pays his dues, religiously.