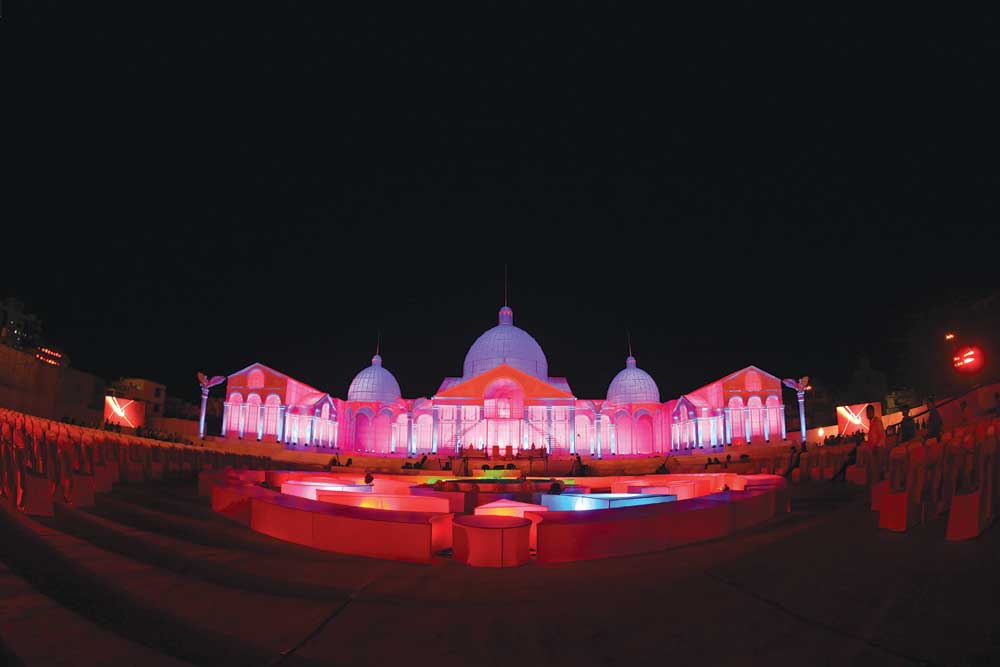 Nothing compares to an Indian wedding— the colours, the music, the lights, the outfits— everything screams celebration. If life imitates art, then an Indian wedding is as close as you can get to a Karan Johar movie. An Indian wedding is more than just about the wedding day; it is several days of festivities, where relatives and friends join in with plenty of song, dance and merriment. It is about families coming together and an occasion for which you save up all your life and no expense is spared—Indian weddings is a $19 billion industry. So imagine when money is no object — the grandeur and opulence of such weddings will leave you stunned.

Neelabh Kapoor of Experiential Weddings by Studio Neelabh has planned some of India’s most luxurious weddings. His client list reads like the who’s who of Indian industrialists and celebrities. Last year, he planned the mega wedding do of billionaire B. Ravi Pillai’s daughter Aarthi that was held in Kerala. The wedding pandal was designed by a major Bollywood production designer, 30,000 guests, including royalty from West Asian countries, were in attendance, and 10 varieties of payasam alone were served at the meal. The wedding with all its events is said to have cost Rs. 50-plus crore.

All the weddings Neelabh plans run into several crores. “We conceptualised and coordinated a wedding in Jaipur recently,” says Neelabh. “Each event was held in a different venue, such as the Rambagh Palace and Jaigarh Fort to name a few.” These are venues which you only get for a day at the most, so Neelabh rented out a space of land nearby to set up the sets and décor elements beforehand. “We prefabricated and moved giant décor elements from Mumbai to Jaipur and set it up on a vacant piece of land so that the client could see what the final effect would be like.” The sets were then dismantled and reassembled on location. Events during the wedding included an elephant polo match, a Raas-Leela evening where celebrities performed, and a world theme dinner, with cuisine from around the world. The wedding took nearly a year to plan and had 3,500 people working on it. Special sets were constructed, giant statues were created, chefs and entertainers flown in, and everything was conceptualised and created in-house.

Shows are now de rigueur at weddings. “We’ve brought in Jennifer Lopez and Rihanna,” says Neelabh, besides dancers, acrobats, orchestras, magicians, and stand-up comics from India and around the world.

“Destination weddings continue to be popular,” says Tejveen Kaur, founder and creative director at T’Zires. “Sri Lanka, Rajasthan, and Thailand are some popular locations.” These weddings can cost Rs. 3 crore upwards. To make the most of the location, each wedding- related event is held at a different venue so that the guests are treated to a new experience each time. “The bachelor party could be on a luxury yacht, while the wedding takes place on a secluded beach,” says Tejveen.

Every element is calculated to create a grand surprise for the guests. For an event planned at Mehrangarh Fort, Neelabh had live installations at strategic locations. “As the guests walked around the fort, they would come across actors dressed in period costumes in different spotlighted areas,” says Neelabh. “It really added to the atmosphere and transported the guests to another time.” When clients are willing to spend so much, they want it to be as memorable as it can get and give their guests the best time. “We have had baraats where the groom has arrived in a helicopter,” says Tejveen. “For one wedding, the baraat consisted of 11 vintage cars and 11 Harley Davidson bikes.” What the client wants the client gets!

The wedding industry is so lucrative that Swarovski, which has a major role in bridal couture, has now entered wedding décor. At a recent wedding at the Taj Falaknuma, more than a million Swarovski crystals were used in the décor. “Our team worked closely with wedding planner Vivek Bhandari,” says Vivek Ramabhadran, Managing Director, Swarovski India. Strands of crystal decorated the mandap, pillars were encrusted with crystals, and even the stage backdrop was embellished with crystal flower pins. “While we work with wedding planners to make their vision come to life, we also have a design bank with ready-to-use installations that can be set up in a day,” says Vivek. One Swarovski flower pin costs around Rs. 500, while the stage and mandap décor starts at Rs. 15 lakh and can cost up to Rs. 1 crore, depending on the level of detail.

But, of course, when it comes to super-luxury weddings, everything has to be one-of-a-kind. The Swarovki India team works with the planners within the specifications of the theme, and these customised solutions can take about a month to put together.

Neelabh likes to keep most of the wedding planning and production in- house. “Each theme and décor we create is unique,” says Neelabh. “Everything is made by us, from the dyed fabric used to cover pillars to the flower arrangements to the installations and sets.” This way, everything is controlled and designs are never repeated or copied. After all, when you are spending crores the last thing you want to see is the same mandap you saw at another wedding a year ago.

The earliest glimpse you get of what sort of wedding it’s going to be comes from the invite. Former minister Janardhan Reddy’s invite created for his daughter’s wedding was all the news recently. It was in the form of an ornate box, which when opened had a LCD screen that played a music video featuring the entire family and the details about the wedding. If this was the invite, you can imagine how lavish the wedding will be.

Puneet Gupta of Puneet Gupta Invitations believes personalisation and having a story makes the invite special. His beautifully made invites come in boxes and cases along with goodies that range from personalised chocolates or teas or handcrafted mementos. One wedding had VIP guests receive gold status as a keepsake. Sandy and Kapil Khurana of The Entertainment Design Company have created invites for Aishwarya Rai and Abhishek Bachchan, Asin and Rahul Sharma, Sachin Tendulkar, Arun Jaitley and others. “We plan months in advance to conceptualise the invites,” says Kapil. “The card, the envelope, the way it is packaged — everything is one-of-a-kind and we try to reflect the couple’s style ethos.” Even the gifts that go out with the invite are tied to the theme of the wedding or are of special significance to the couple. They can cost upwards of Rs. 500 a piece.

Security is so important at high-profile weddings that invites too are made secure. An invitation card can now be in the form of a tablet that has an app with all the information regarding the wedding. Sandy says, “We have even designed security cards that are sent out with the invites.” The cards contain barcodes that are scanned at the venue for entry. Wrist bands which contain barcodes have also been handed to guests so that they can enter specific areas at the venue. In many cases, the wedding invite literally becomes the key to getting in.

Check out your parents’ or even your older sister’s wedding album and you will find photo after photo of the newlyweds standing stiffly with relatives and friends. The wedding video is even more painful to sit through—very little editing, and awful lighting. This was more or less the norm up until a few years ago. Wedding photography and filmography has since seen a sea change. They are all about candid images filled with emotion and drama. Post-production and editing gets importance, with videos slickly filmed and edited. Shoot venues are planned carefully.

Most photographers who have brought about this change didn’t set out to shoot weddings, but found a need for contemporary and candid wedding photography in India and stepped in. “My story begins in 2008 when we were looking for a photographer for my sister’s wedding and couldn’t find even one doing the kind of candid shots we wanted,” says Joseph Radhik of Stories by Joseph Radhik, one of India’s most famous wedding photographers. “During my search I came across the works of photographers from across the world. I was hooked, and I had unknowingly begun a journey that would change my life.” The IIM alumnus co-founded Stories with his brother and partner, Joshua Karthik. Today, Stories is a full-service photography and video production house with four photo directors and two video directors. The company has worked with Masaba Gupta, Asin and Rahul Sharma, Boman Irani and the GVK family, to name a few.

Rakesh Prakash, too, started in this business around the same time as Joseph. “I found that most weddings were being shot by traditional photography studios.” He got his first break at a friend’s wedding when he showed her some samples of his work. Things snowballed from there, thanks to social media and word-of- mouth. And now his eponymous company has shot weddings for the TVS family, Pothy’s family, VGN family and several celebrities and cricketers. “There is so much exposure to creative content, not just wedding-related but also movies, art and writing,” says Rakesh. “I believe all that influences the couple when they decide what they want for the wedding. Nowadays, couples research and look for a wedding photographer whose work speaks to them. “I’ve shot a wedding where John Legend performed at the reception dinner; on the other hand I shot a reception dinner where all the food was cooked by friends of the bride and groom,” says Joseph. “From the heart of Rome to the foothills of Manipur, I’ve learnt that there’s a story to be told in every wedding, if you are willing to look for it.”

Creating stories out of weddings is exactly what The Wedding Filmer does. The company, founded by award-winning filmmaker Vishal Punjabi, consists of Bollywood and internationally renowned technicians who film and edit wedding videos with all the beauty, emotion, poignancy and drama of a big-budget Bollywood production.

What made a renowned filmmaker and director decide to film weddings? “A friend of mine was getting married and I shot her wedding,” says Vishal. “While shooting the wedding, I talked to the bride, groom, the family and friends. I found what they were saying very nice, so I put it together into a film and I used parts of what they said in their film and made it more like a documentary, with a narrative from the family’s point of view. I cut a short trailer and the couple really liked it. And for me the creative satisfaction was very high. So I decided to go bigger with it.”

These wedding films are light-years ahead of traditional wedding videos, they are all about capturing the candid moments. The latest equipment, drones, slow-motion camera work, hi-tech light and sound equipment, cutting-edge software, everything is used to bring cinematic magic to real-life weddings.

Clients are picked on first come, first serve basis. While the wedding photography can cost Rs. 3 lakh upwards, the wedding film is priced at Rs. 5 lakh upwards per day. These photographers and filmmakers don’t let the scale of a wedding get in the way of capturing the meaningful moments. As Joseph says, “I am a big fan of the spectacle, but I am a bigger fan of the smallest emotions.”