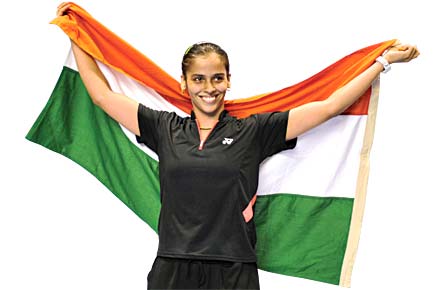 She is one of India’s most iconic athletes and was the first female player from India to achieve World no.1 spot in April 2015 and also won a bronze at the Olympic in 2012. But, behind all the fame and accolades is a story of tough beginnings. Born in Haryana in 1990, she faced what other girls faced in the state in that period – discrimination against girls. Luckily for her, both her parents were sports enthusiasts who played badminton and made sure she observed them play at a local club, which imbibed an interest in the game early on in her life.

Sensing her talent, her father, a scientist with the Directorate of Oilseeds Research moved to Hyderabad in late 1990s as the city fast emerged as a badminton hub. The tough journey had started – Saina had to be taken to the stadium every day early in the morning at 6 am and the distance from the house was 20 km, not to forget the fees and expenses on her training, which was more than half of what her father earned a month. Her doting father borrowed money from friends, colleagues and relatives to make sure her talent was harnessed and she was able to devote all her time and energies to the sport.

“I never expected to play like this. I started playing because I saw my parents play in Hisar. I was never competitive about the game; just that I wanted to do better than others,” says Saina Nehwal Badminton player, India

The morning training session would go on for about two hours, after which Saina would attend school and then not only had to practice twice a day at the badminton academy, before and after school, but also cope with her education. The body of a frail child started to take its toll, as she would be tired and dosed off on the scooter ride to the training centre. Alarmed by the safety concerns, the Nehwals moved their house closer to the badminton academy, a move that worked favourably for the family. As she started participating in tournaments outside Hyderabad, one parent had to accompany her, which only added to their expenses not to forget the expenses on shuttles, racket, shoes, and maintaining her wellbeing and equipment.

Tournament prize money did help, but it was mostly nothing compared to the cost of her training. This financial tight-rope walk continued till 2002, until Yonex Sunrise sports offered to sponsor Saina’s kit. In 2004, BPCL started to support her and in 2005, Mittal Sports Trust spotted her and the financial burden eased significantly. However, academics took a backseat and she was unable to graduate. All the accolades and attention did not defer her from her single-minded focus on her quest for an Olympic medal, which finally did come in 2012 when she was 22. A Padma Shri in 2010 followed by Padma Bhushan in 2016, she is at the peak of her career having faced adversity and tough situations to come out successful. Yet, she mostly cherishes the fact that many girls took to sports, especially badminton being inspired by her feat and achievements – the mark of a true achiever.