An Evening of Delightful Musical Journey 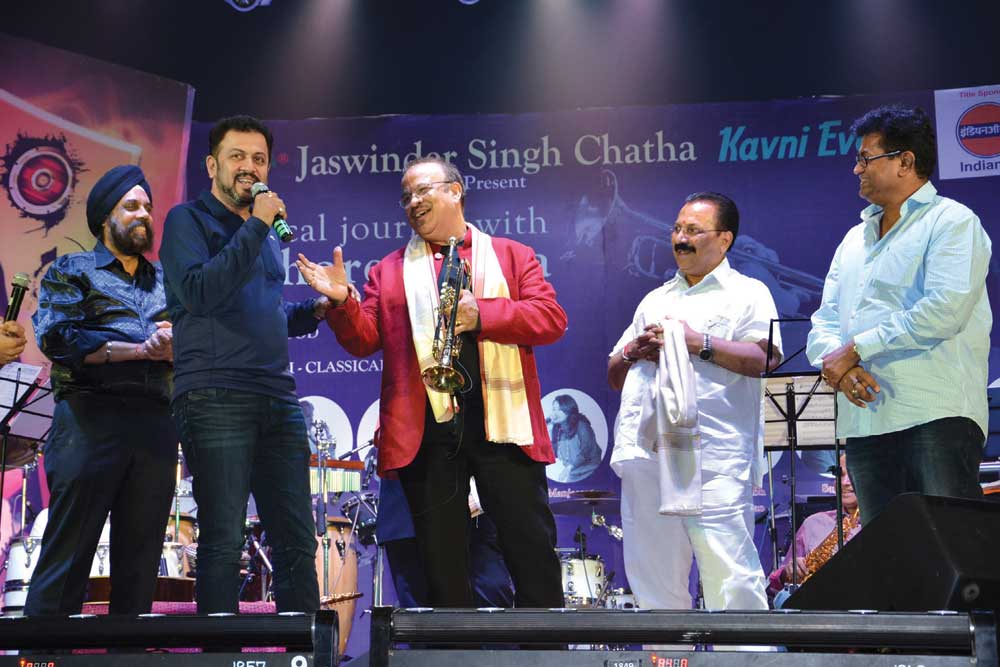 A musical journey with trumpet player Kishore Sodha that captured the audience from the very beginning, with its grand entry, and included western numbers highlighted by the flute, drum, octapad, tumba, tabla, congo, dholak, percussion (rhythm) to melody while taking it to new heights with the trumpet & trombone.

There was a Bollywood session, with singing by Gaurav and Manjeera with songs such as Roop Tera Mastana, Bachna Ae Hasino to BadtameezDil&JanamJanam, made different with Trumpet KaTadka, while the Broadway session with remarkable musicians such as Blasco and Ramon Ibrahim featured a couple of songs such as MohabatBhuriBimari and KhoyaKhoya Chand sung by Anjali.

The MC for the evening. RJ Anmol also did an excellent job at keeping the audience involved by narrating some events from Kishore Sodha’s life and involvement with various Bollywood and music industry Greats. The audience was en-thrilled in the waves of music coming from the Trumpet. The focus was not so much on the singing but on the instruments. Kishore Sodha, apart from his best on his trumpet, Raj Sodha was on his Saxaphone playing the role of “ Silent waters run deep “ as usual. There was a young guitarist only 21 years old, Rhythm Shaw, playing Guitar of International Standard In attendance was the awesome Sanjay Vidyarthi, who completely entranced and gripped the audience with an Indian classical session with some ragas too, amid amazing highlights of the trumpet by Kishore Sodha and his musicians (flute, saxophone and tabla).

An instrumental session ensued bringing a fusion of Indian and Western music, after solos from the flute, saxophone, lead guitar, bass guitar, drum set etc giving the audience a taste of how talented these musicians really are.

A happy and satisfied audience also included MsPhalguni Pathak and a couple of other Music artistes who were generous with standing ovations and applause through the evening. The audience realized that Kishore Sodha was making an attempt to create a niche for himself by offering a show with a difference and given the dedicated followers he has across the gender, he succeeded in creating a show which can be called ‘Its Different’.