In Praise of Stoicism

Surviving the age of anxiety 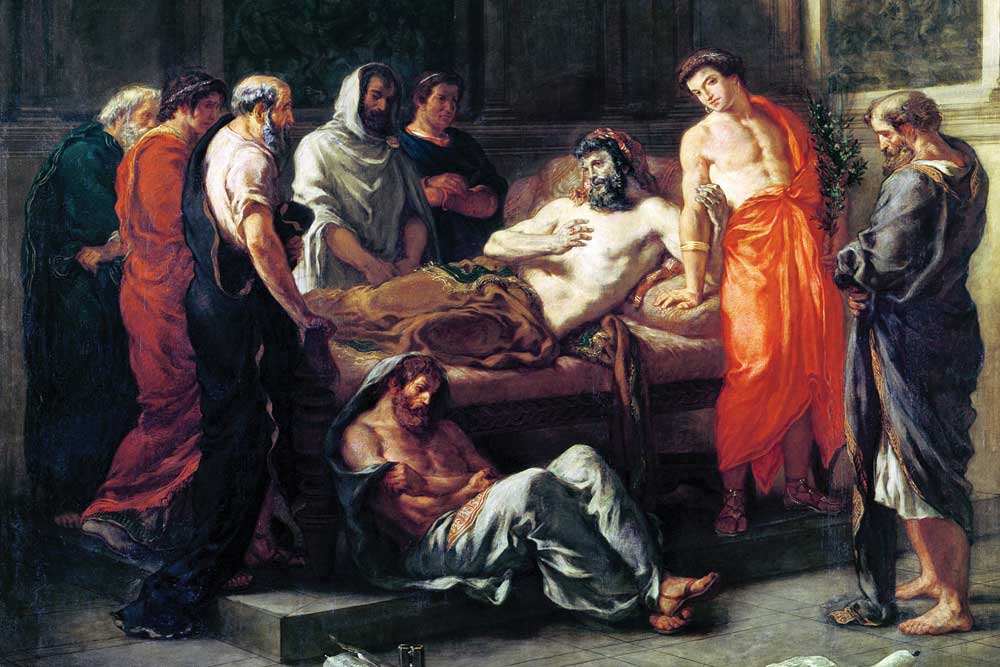 IT HAS BEEN called the ‘9/11 photograph you didn’t see’. Thomas Hoepker, the Magnum photographer who shot it, chose not to publish it in a book about that September morning as it was deemed too ‘callous’ in the immediate wake of the event. It appeared in a book only on the fifth anniversary of the attacks. The photo shows five people on a summer morning talking to each other. It has all the ingredients of a New York minute—sunlight and skies, water and wind, shadows and conversations, skyscrapers and bridge, bike and riders. But this isn’t just another morning; across the waters, swathes of smoke billow up from the burning towers. It is easy to glance at the photo and conclude that the people in it have turned their back to the carnage unfolding up ahead, and to condemn them for their ‘indifference’. Critics called the photo ‘shocking’, as the ‘young’ people in it were ‘relaxing’ and already ‘moving’ on from the event. But as others pointed out, those in the photo were doing what they could, and what people across the world were doing—reaching out to strangers and discussing the unbelievable; catastrophe makes comrades of strangers.

Fifteen years after the attacks, we can look at the photograph and draw another conclusion as well: that photo is all of us.

The one defining response to 2016 is consternation; disbelief. No one expected a Brexit, or a Donald Trump as President, or that Rs 500 notes would become toilet paper. And while all of this unfolded, while political, social and economic events unwrapped, we all sat across the waters and did what we could—talked to our partners who were with us and strangers who passed us by. And through those conversations, via discussions, we came to accept. Crucially, this acceptance was not resignation. It was ‘understanding that we are unable to change anything but ourselves and our response to ever-changing circumstances’ (from Stoicism: Ultimate Handbook to Stoic Philosophy).

Critics might tut-tut that we toyed with our phones as Rome burnt. But one could argue that the only way to deal with the events of 2016 is with stoicism; just like those New Yorkers in the photograph. Stoicism is often considered a philosophy of indifference. And the dictionary meaning of ‘indifference’ is cringe-worthy and bothersome: ‘lack of interest, concern, or sympathy’. But stoicism is not the pursuit of aloofness. Rather, it is a hunt for detachment. The sensible response to events today is to realise and acknowledge that the only control we have is over our own thoughts and responses.

In this age of rage and anxiety, when ‘liberal’ has become a slur, where diversity gets scuttled as a hurdle, where inclusiveness is not seen as a beacon, and where agendas smother facts, what are we to do? How do we make sense of any of this? We can turn to those who applied the wisdom of the Ancients to their daily lives.

Vice Admiral James Stockdale (1923 – 2005) would be one such example. And it would be safe to say that he knows more about adversity than most folk; he served in the US Navy for 37 years, mostly as a fighter pilot aboard aircraft carriers. He was shot down over North Vietnam, was a prisoner of war in Hanoi for seven-and-a-half-years, tortured repeatedly, in solitary confinement for over four years and in leg irons for two. As a civilian he was also a lecturer in the Philosophy Department of Stanford University. Stockdale has written extensively on how the principles of stoicism helped him not just survive but also lead his men through those travails. He also distinguishes between optimism and stoicism. He says the ‘optimists’ in prison would tell themselves that they would be out by Thanksgiving, then Christmas, then New Year’s. The realisation that they were not going to get out by the set date often made them die of a broken heart. A stoic, on the other hand, would accept his situation, while believing that he will eventually prevail.

He writes, ‘Stoics can be made to sound like lazy brutes when they are described merely as people indifferent to most everything but good and evil, people who make stingy use of emotions like pity and sympathy. But add this requirement of total personal responsibility for each and every one of your emotions, and you’re talking about a person with his hands full. I whispered a ‘chant’ to myself as I was marched at gunpoint to my daily interrogation: ‘control fear, control guilt, control fear, control guilt’.’

Today when our innate impulse is to rage against the majority, and to rile against opponents of our beliefs, the principles of stoicism would come handy, as they encourage temperance. As Epictetus the Greek philosopher and Stockdale’s guru advised, “For it is within you, that both your destruction and deliverance lie.” All the bluster and fury that froth up on social media are the effluents of emotion. It signals an individual’s loss of control over the overarching narrative. Unable to wrap his head around events, the individual finds a mirage of solace in the tribe. But as stoicism would helpfully remind us; the quality of our life is in our hands. “What is the fruit of your doctrines?” someone once asked Epictetus. “Tranquillity, fearlessness, and freedom,” he answered.

Let’s look again at that 9/11 photo. A veneer of tranquillity shimmers through. Is that why it disturbs us? How is it possible for these people not to be ‘visibly’ flustered, we ask ourselves? Of course, it is impossible to be tranquil while things fall apart. But one can strive for quiet, with the knowledge that the only choice we have is that of choice; we can choose only how we react.

Looking at the image in 2011, Jonathan Jones wrote in the Guardian, ‘As an image of a cataclysmic historical moment it captures something that is true of all historical moments: life does not stop dead because a battle or an act of terror is happening nearby.’

The events of 2016 might appear cataclysmic to some, but the truth of the matter is that life continued. Babies were born, and learnt to crawl and then walk. Children squealed in the playground. Friends bought flowers. Lovers woke up to the sun streaming in through windows.

Jones reminds us of WH Auden’s words from the poem Musée des Beaux Arts (1940), which Epictetus would probably have high-fived. In these lines Larkin describes the painting Fall of Icarus, where a farmer continues to plough his field, unperturbed, even as Icarus crashes from the skies into the sea, dissolving into green ripples:

In Breughel’s Icarus, for instance: how everything turns away
Quite leisurely from the disaster; the ploughman may
Have heard the splash, the forsaken cry,
But for him it was not an important failure; the sun shone
As it had to on the white legs disappearing into the green
Water; and the expensive delicate ship that must have seen
Something amazing, a boy falling out of the sky,
had somewhere to get to and sailed calmly on.

Recently Madonna echoed Larkin’s words about the nature of suffering ‘Its human position; how it takes place/ While someone else is eating or opening a window or just / walking dully along’. She also reminded us of how the stoics try to lead life: by not becoming overwhelmed by the unpredictability of the universe.

At the Billboard’s Women in Music Awards Speech, she said, “People say I’m controversial. But I think the most controversial thing I have ever done is to stick around. Michael is gone. Tupac is gone. Prince is gone. Whitney is gone. Amy Winehouse is gone. David Bowie is gone. But I’m still standing. I’m one of the lucky ones and every day I count my blessings.” While her contemporaries died of drugs and illness, she walked duly on, just like the ploughman in the painting. Madonna talked about being raped and robbed, abused and humiliated, yet she chose to not be overwhelmed and to count her blessings instead. She found tranquillity, fearlessness and freedom through gratitude. Like the stoics, she looks at adversity as a blessing. And ‘Stoicism is, as much as anything, a philosophy of gratitude—and a gratitude, moreover, rugged enough to endure anything’ (Indifference is a Power by Larry Wallace in Aeon).

The author Eleanor H Porter might not have heard about the stoics when she wrote her bestselling book Pollyanna. But the orphan girl with her Glad Game might have impressed the erudite Greeks. Pollyanna and television series MASH were the two biggest big touchstones of my pre- teen life in Madras. As is now well-known, the premise of the Glad Game is simple enough: find something to be positive about no matter how bleak the situation might be. The book has fans and critics alike, many find it (rightly) twee and naïve, but as a children’s book it imparts a profound lesson: not only should we spot the silver lining, we should also be deeply grateful for it.

I found myself thinking of Pollyanna as a 25-year-old in June 2007. A kidney infection had blown into life-threatening septicaemia (blood poisoning), which led to ARDS (Acute Respiratory Distress Syndrome). Lying in the ICU and hooked to a mechanical ventilator, I (thankfully) knew neither my odds nor my diagnosis. But what I knew was that I was conscious. I could not leave the bed, but I was awake . The man on the bed beside me was not awake. An ICU is a strange place, as you know your ‘bed partners’ only through their moans and cries. You never see them. Soon as you are deemed non-critical you are hurriedly wheeled out, and given no opportunity to bid farewell to those who remain. The man beside my bed had been bedridden for long. During the daily half-hour visiting hours, his daughter would come sit by his feet and tell him about her day, and ask about his. He never responded. At night I’d hear grunts and heaves and see the ICU staff rushing towards his bed. I never learnt who he was, or if he recovered. But with few worries on my mind, other than the burden of the next breath, he made me aware that I’d much to be grateful for.

As Wallace writes in Aeon, ‘Only by envisioning the bad (as the Stoics advise) can we truly appreciate the good; gratitude does not arrive when we take things for granted.’ Illness forbids us from taking anything for granted, not the ability to walk or swallow or even breathe. Listening to the man’s silence as his daughter spoke, I could envision a condition that was far, far worse. At that moment, it was east to play the Glad Game.

This year might have ruffled our collective feathers, so it might be wise to heed the Stoics. Why not find moments to be grateful for; our own families and friends and the millions of men and women who live quiet lives of virtue, passion and fortitude. It is in our collective brotherhood and sisterhood that hope springs. 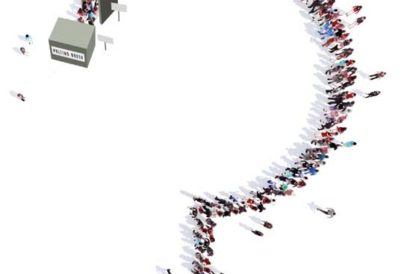 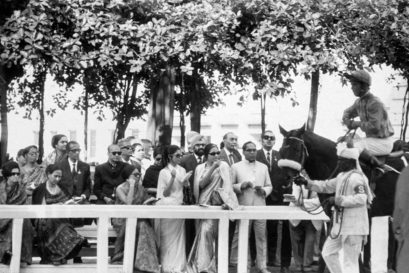