Yann Martel: The Bridge of Faith

Yann Martel handles life’s big mysteries with the lightest of touch. Will he finally emerge from the shadow of his blockbuster fiction? The novelist in conversation with Nandini Nair 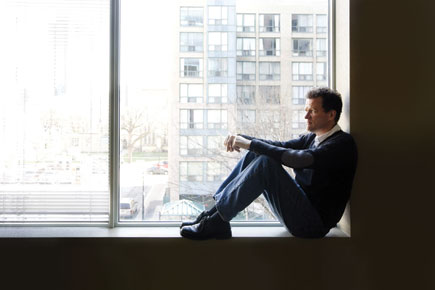 Canadian author Yann Martel knows that happiness makes for contented lives but does little for the cause of literature. Stories arise not from daily routines but rather from the rupture of it. His latest novel The High Mountains of Portugal (Canongate, 330 pages, £14.99) tells of characters caught in these moments of breach. Divided into three parts, ‘Homeless’, set in Lisbon in the early 20th century, is the account of Tomás who loses his wife Dora, child Gaspar and father within a week. With these deaths, ‘his heart became undone like a bursting cocoon’. He embarks upon a journey to the High Mountains of Portugal—in a ‘brand new fourteen-horsepower, four-cylinder Renault’—in search of a wondrous crucifix. ‘Homeward’ is the story of Dr Eusebio Lozora whose wife loves him too little. Working late one night in his clinic, an old woman brings him the body of her husband to perform an autopsy upon. Finally, ‘Home’ is about Senator Peter Tovy who moves to a remote village in Portugal with his pet chimpanzee after the death of his wife.

Readers and admirers of Life of Pi (2001) can breathe easy that animals do lope through these pages. While this novel is wonderfully warm and funny, it is also a “literary exploration of faith,” as Martel describes it over the phone from Saskatoon, in Saskatchewan, Canada. Faith for the 52-year-old author is not the noise and clamour of idols and superstition; rather it is the “motor of life” itself.

Martel goes to great extremes to emphasise that he is no rabid evangelist. This qualification is especially important in Québec, he says, where “the average person who reads novels is not religious, and people who are religious do no read novels”. As a writer, he hopes to bridge these worlds by bringing the question of faith into the fabric of his fiction.

“A writer is supposed to be contrarian. To make you uncomfortable. As a contrarian secular writer, I notice faith,” he says. The son of a diplomat father and a translator mother, Martel’s childhood was spent in far-flung places such as France, Mexico and Alaska. He grew up with the axiom, ‘Understand life through art and not religion’. His parents were products of the Quiet Revolution of the 60s when Quebec moved away from the domination of the Catholic Church towards greater secularisation. He studied philosophy at university. But he soon felt confined by the limits of Western reason. During his year-long travel in India after his college days, he noticed that India is where gods and animals abound and rub shoulders with one another. He says, “Reason has given us this phone call. It has put a man on the moon. But while in India, I was struck by faith.”

In his blockbuster novel Life of Pi, faith is quite simply a source of strength, a buoy during a shipwreck. Similarly, in The High Mountains of Portugal, Martel explains, each of his characters represents an encounter with belief. Tomás whose family has died has lost his faith. The doctor is losing his faith. And the Senator is in desperate need of it.

Martel’s greatest skill is that he handles overwhelming issues, life’s big mysteries with the lightest of touch. His book is like a prism to the sun; the tilt of the glass will change the colour of the light. The interpretations are the reader’s alone; you can choose to see this work simply as a rollicking parable or can read into it the history of Palestine. It thus follows that while characters might be seeking the High Mountains of Portugal, there are no physical mountains in the High Mountains, there is nothing beyond mere hills in fact. For the characters in the book, as Martel explains, these are “mountains of the mind”.

My favourite section is ‘Home’, because of its absurdity and tenderness. Senator Peter’s beloved Clara is dead. His son Ben is ‘incredibly brightly stupid’. His granddaughter Rachel ‘walls herself in a teenage tower of resentment’. The first encounter between Peter and Odo the chimpanzee proves, in a delightful way, that ‘we are risen apes, not fallen angels’. Once Peter has bought the ape, he decides to leave Canada for Portugal for its warm weather and for reasons of his ancestry. The evolution of the relationship between man and animal and the solace they find in the other is created with great poignancy. Peter finds that he’s been ‘touched by the grace of ape, and there’s no going back to being a plain human being’.

Animals in Martel’s books compel the reader because they are animal-like. While in Life of Pi you learn about tiger traits, such as prustening (the noisy sound used by tigers as greeting), here you come to appreciate the ‘intense silence’ of Odo’s presence, his ‘pensive slowness’ and the ‘profound simplicity of his means and aims’. Martel says that he uses animals as biological entities on which he can paint various colours. “If you go to a zoo right now and see a great ape, a chimp, you look into its eyes and there is intelligence afoot. It is troubling,” he explains. “We humans, with our ubër intelligence, are throwing things off balance. When we see animals there is a religious triggering. Animals are very good at being in the right here, right now. It is like divine figures who are fully present in the moment.”

While Odo is wonderful for his chimpanzeeness, an Iberian rhinoceros—more mythic than real—also features in The High Mountains of Portugal. Martel has been itching to include a rhino in his works since the time of Pi. He dabbled with the idea of making Richard Parker a rhino, but then decided that having an herbivore marooned on a raft in the middle of a ocean would restrict the plot. So a tiger it had to be. What is his fascination with rhinos, I ask. “Next time you look at a rhino, notice it has the most beautiful and moist eyes,” he says. The rhino makes a very special appearance in this book to show the reader: “you think life is ordinary but it is not, it is extraordinary, there are ‘rhinos’ appearing all around”.

In Martel’s novels magic and fact, faith and existentialism cohere into a convincing reality. While the label ‘magic realism’ has been applied to his work, he considers himself apart from the tradition of Gabriel Garcia Márquez. Instead, he prefers to see his work as “gritty realism with leaps”. And gritty realism there is plenty of in this book. The mechanics of the autopsy performed by the pathologist, the removal of the scalp and the sawing through the skull are recounted in detail. This verisimilitude is no act of chance. Martel who has worked with palliative care recounts that he did witness two autopsies to render them into prose. His medical experience inured him against squeamishness about bodies and mortality. He says, “I saw one on an older man. Older people are a better fit to death.” The second one was on a younger person and was harder to watch as the man would have woken up that day and wouldn’t have known it was going to be his last.

If Martel sticks to detail, his leaps are what hook the reader, whether it is Maria Castro settling into her husband’s body or the appearance of magical creatures.

Odo the chimpanzee is named after the three middle letters of Godot, reveals Martel. It is also a palindrome, which intrigues the author for its circular nature. While Godot has become a name entrenched with waiting and longing, the name Pi is now associated with voyages and persistence. Martel is thrilled that a story he wrote when he was poor and struggling sold 12 million copies and won four Academy Awards, but he knows that the shadow of Pi still looms over. His last books We Ate the Children Last (2004) and Beatrice and Virgil (2010) didn’t have a similar impact. He says with as much remove as he can muster, “If readers and publishers think I am a one-hit wonder, that is fine. Better one hit than none.” But this much is certain: The High Mountains of Portugal is a fine successor to Life of Pi.