When it comes to Naxal literature, the outsider’s gaze inevitably seems touristy and impatient. Turn to the accounts of insiders for the real thing 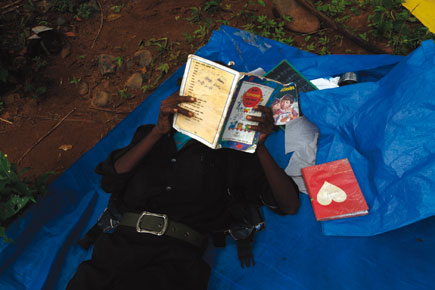 When it comes to Naxal literature, the outsider’s gaze inevitably seems touristy and impatient. Turn to the accounts of insiders for the real thing


The late 60s were turbulent not only in India but the world over. The Vietnam War was at its peak. In France, there was a popular uprising of students and 11 million workers called the May ’68 uprising. In China, the Cultural Revolution had been introduced by Mao. In Cuba, a former doctor and now a famous revolutionary with a straggly beard and cigar—Che Guevara—was set to become the most iconic figure in Europe after Jesus and the Beatles. In India, the spring thunder of Naxalbari had inspired many students studying in elite institutes like St Stephen’s College in Delhi to leave their comfortable upbringing and rough it out in the jungles of Bihar and Bengal. The historian and author Dilip Simeon was one of them. But as is true of many men of his generation who dived into the revolutionary pool and swam back to shore later, there is a reluctance on Simeon’s part to tell his story as it happened through a personal narrative.

So, instead, Simeon has put together a fictional account of those days, 40 years after it happened, in his debut novel, Revolution Highway, published by Penguin recently. Like Sudhir Mishra’s 2005 film Hazaaron Khwaishein Aisi, Revolutionary Highway is a story of friends—Mohan, Pranav, Rathin, Sin Taw and Divya—who get drawn to the idea of revolution and shift to its live battlefields. Right from page one of the novel, Simeon’s advantage as an insider is very evident. From stories of comrades raiding theatres in Calcutta to stop the screening of Dev Anand’s Prem Pujari (because they think it has an anti-China plot) to the hideouts of young revolutionaries in north Delhi, Simeon offers a ring-side view of events in rebel circles. But, soon, the young revolutionaries are thrown into the vortex of an ugly world, previously unknown to them. The difficulties, as they would soon realise, begin with basic stuff such as relieving oneself. In a chapter aptly titled ‘What is to be done’ (after Lenin’s popular political pamphlet), our urban comrades have a hard time squatting in the open. So when Mohan squats in a maidan near a Delhi slum, Simeon describes it thus: ‘Modesty be damned, but how in hell was a man to perform his bowel movements if he were dogged everywhere by keen-eyed pigs bent upon a quick breakfast? It was not only disgusting, but also disconcerting — one had to ward off the grunters with stones and also be prepared to make flanking actions and rapid physical manoeuvres which he began to liken to China’s Great Leap Forward.’

Finally, the young comrades face dilemmas over the concept of ‘class annihilation’. As Maoist leader Kanu Sanyal, who committed suicide this year, would say later: “Killing a traffic constable on a Calcutta street would not bring revolution.” Of course, present-day Maoists—many of them from urban backgrounds like Dilip Simeon—would swear by the power of revolution and call those who criticised the movement ‘revisionist’. But just as those who stayed behind had their own reasons, those who chose to leave it had their own as well.

As Shambhu reflects in Simeon’s novel: ‘He thought about the home-made knives he had carried over such a long distance. They were made for the purpose of annihilating class enemies, for the sake of a better future for the poor and the deprived. Was it just as well he had dropped them into a gutter? … What did the Revolution mean for Prem Tailor and the rickshawallah?’ Further, Simeon reflects through Shambhu: “The Revolution? I don’t know,’ he said, ‘I don’t think the leaders have any idea of what’s happening. Wise men live in a world of their own.”

By now, one realises that it is not Shambhu but Dilip himself speaking through his character.

The same insight is offered by writer Satnam in his book Jangalnama, originally written in Punjabi, and published in English by Penguin this year. In 2001, right after America’s invasion of Afghanistan, Satnam spent two months with Maoist guerillas in Bastar. Jangalnama is a simple yet powerful account of his stay.  These days, many journalists go to guerilla zones and get their photographs clicked with guerillas. Later, they write accounts of their short stay and how they had to brave dangers. In most of these, reporters assume greater importance than their subject. But in Jangalnama, Satnam has clearly kept himself in the background, almost a blur, and brought to fore the stories of those wedded to the idea of revolution. The accounts, though sympathetic, offer a realistic view of guerillas and Adivasis.

As a senior Maoist leader, Comrade Kosa, tells Satnam: “Would you like to know what we eat here? Fish, rice, wild fruits etc, appear sumptuous, and from a distance, one might imagine jungle life to be ideal, where there is no dearth of food. But, if you go out of this camp and look around in the villages, you won’t find many elderly men or women—our people rarely reach the age of fifty, as far as I know…”

With both Simeon’s and Satnam’s work, the proximity to the subject hardly creates any hindrance, and, in fact, works as a strength. Both offer fascinating accounts of two stages of the red rebellion—one through fiction and the other through narrative.

But can good writing alone sustain a novel or personal narrative? Celebrated writer VS Naipaul tried to write his own account of the red rebels in India in a sequel to his novel Half a Life. In Magic Seeds, Willie, who we have met in Half a Life, is pushed by his sister to find his cause and joins the Naxals. Taking a cue from the falling out of two Maoist stalwarts, Kondapalli Seetharamaiah (called Kandapalli Seetharamaiah in the book) and KG Satyamurthy, Naipaul  writes about urban revolutionaries drawn to the revolution because of their personal demons (one is obsessed with Einstein, another is a compulsive killer, and yet another joins the Naxals because of sexual rage). The whole story is forced and far removed from reality. As Michiko Kakutani wrote in a review of the novel in The New York Times: ‘And Mr Naipaul’s contempt for all the people he has created in this novel makes for a mean, stingy book—a book full of judgmental pronouncements and free-floating rage, and sadly bereft of insight, compassion or wisdom.’

As an antidote, if not anything else, read Simeon and Satnam.