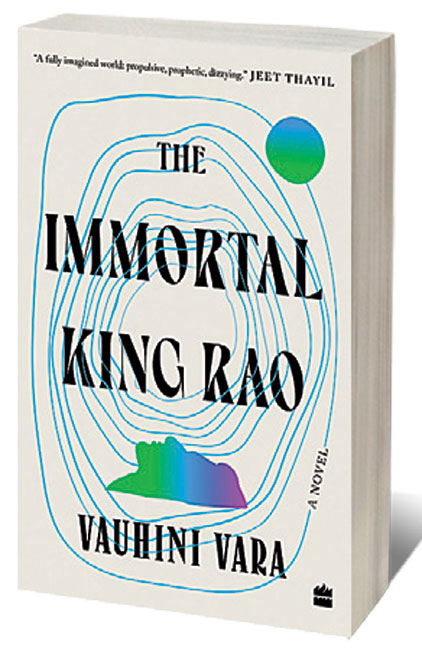 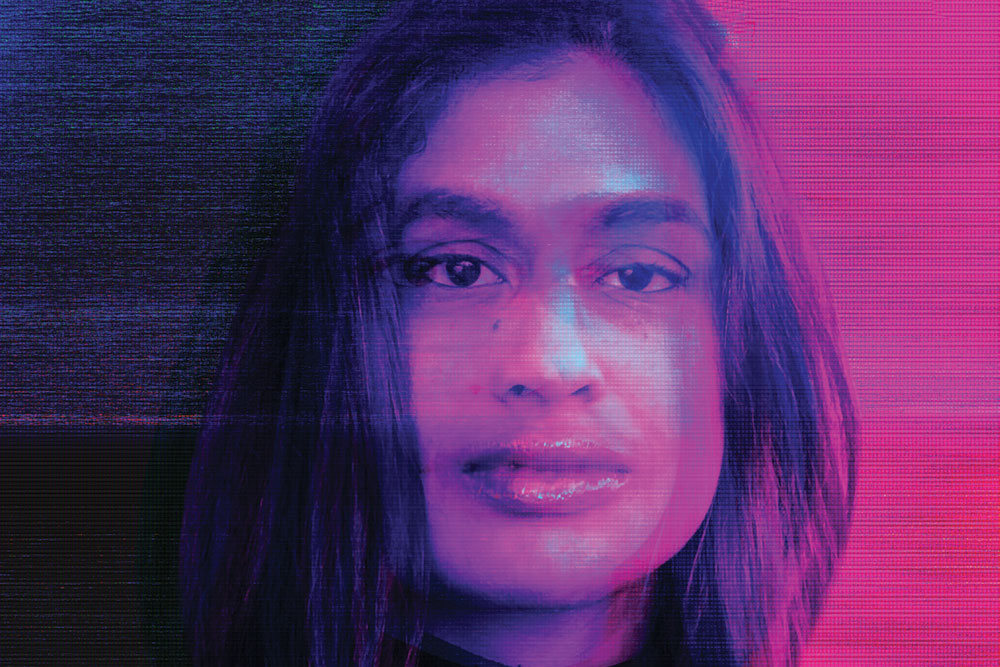 
PULLING OFF ONE genre is tough enough at the best of times. And then there are novels and movies and songs that are essentially “high ventriloquism,” spanning several different genres, voices and tonalities and excelling at every one of them. The recent dark comedy Kevin Can F**k Himself (streaming on Amazon Prime Video in India), for example, tried something radical (and came close to succeeding): it had distinct comedy and drama segments shot in vastly different lighting, with vastly different soundtracks, moods and character arcs that both reflected and critiqued their respective genre conventions.

The 39-year-old American writer and editor Vauhini Vara (based out of Fort Collins, Colorado) has achieved something similar with her debut novel The Immortal King Rao (Fourth Estate; 384 pages; ₹ 699), a blend of speculative, historical and satirical fiction. Vara’s novel imagines the life and works of King Rao, an Indian American from a Dalit family (like Vara herself) who becomes the world’s most successful tech-entrepreneur and eventually, the de facto head of the new, corporate-run world order called the “Shareholder Government”.

As the writer Karan Mahajan notes in his blurb, this is essentially three great novels in one—the action alternates between three distinct timelines. There’s the story of King’s remarkable success, the story of how he built the tech-firm Coconut through the 1970s and ’80s, which essentially took over the world. There’s the present-day narrative (set in the 2050s and beyond) of King’s daugh­ter Athena, who’s trying to understand her father’s legacy, thanks to the dubious gift of her father’s memories (he has injected her with a genetic code that allows her to access the internet and her father’s memories with her mind) — and the terrifying reality of “Hothouse Earth”, our planet’s new, climate change-led moniker. And then there’s a third, historical narrative, set in a coconut plantation in Andhra Pradesh, in the 1950s, which tells us the story of King Rao’s family.

How does a debut novelist juggle three such impressively told stories, especially at the plot level, where mat­ters get complicated, especially in the second half? “The short answer is it takes 13 years!” Vara says. “When I started this book, I knew there would be this nar­rator called Athena who’s the daughter of King Rao. I didn’t expect her to have her own storyline. As I started to write I realised that I was curious about who Athena was and what was happening in this dystopian world she was writing from, and that necessitated the creation of a new timeline.”

Of course, it helped that from a very young age, Vara’s reading was diverse and involved futurism. It explains how and why she’s so comfortable with and so good at a range of different autho­rial styles. “I was born and raised in a small town in Saskatchewan, Canada, which is a pretty rural place,” Vara says, describing her early childhood. “I lived there up until I was 10. My parents immigrated from India to England and then to Canada. I’d spend my time at the local library and pick up whatever I could, really. One of my first favourite novels was A Wrinkle in Time by Madeleine L’Engle. I was also really interested in books on space travel, and the kinds of futuristic technologies people were talking about in the 1980s. If I am being honest, though, what I really read voraciously in those days was Archie!”

One of my favourite things about The Immortal King Rao is that it is a novel that rewards close reading, throughout its 370-odd pages. For ex­ample, the subtle usage of music-linked nomenclature in the book—the devices that King and Athena use to enable the latter to access the internet (and her father’s memories) have names like “Harmonica” and “Clarinet”. Later, when we are reading about the mak­ing of King’s first personal computer, the “Coconut”, we learn that the ad campaign for the same used The Beatles song ‘Come Together’ (the ad ends up becoming more famous than The Beatles themselves). There’s a sense that music—arguably the most un-algorith­mic of all human endeavours—repre­sents the human pushback against the impersonal nature of technology.


As a writer it’s a tricky balance to achieve—the book has some elements of satire and there are ways in which it is trying to play with the narrative of the rise of the CEO that’s already in our culture,” says Vauhini Vara, author

“If so, that was probably true for me at a subconscious level,” says Vara. “Music can exist outside of language and it’s something we can all experience no matter what our backgrounds are. And I think that’s where I was coming from, the idea of music as a medium that’s particularly alive and vibrant, in some ways the opposite of the ‘coldness’ of technology.”

Around the same time that we are discovering the extent of the embedded tech inside Athena’s body, she’s going through puberty and the accompany­ing sense of disgust at her own body. The otherness of the tech and the more familiar otherness of one’s own body under puberty dovetail beautifully in a passage where Athena compares herself to “an Egon Schiele grotesque”; referring to the Austrian painter who drew his own and several other naked bodies employing the kind of Expressionism often associated with his mentor, Gustav Klimt. Like a lot of segments in this novel, this passage makes some startling and apposite connections across history.

“I didn’t mean for this to come across in an explicit way,” Vara explains. “But I think it was intentional that these tech­nologies that King has introduced in her body are coming to the fore around the time of puberty. I think that when it comes to puberty, all of us can relate to that divide between bodily expression and who you feel you are on the inside. It’s a familiar feeling. So, for me it felt like the right way to introduce an unfamil­iar concept to the reader, the idea that Athena can use her mind to connect to the internet.”

Vara’s experience as a tech reporter at The Wall Street Journal and later, as business editor at The New Yorker, comes to the fore in the chapters describing King’s rise to power and prominence. These chapters are at least partially tongue-in-cheek, and they’re deeply informed by the way contempo­rary tech-journalism creates personal­ity cults out of CEOs like Elon Musk, for example. We’re looking at King as much as a product of this mythmaking as his own accomplishments.

TALKING ABOUT HOW her journalism informed these passages, Vara says, “As a writer it’s a tricky balance to achieve—the book has some elements of satire and there are ways in which it is trying to play with the narrative of the rise of the CEO that’s already in our culture. But at the same time, I also wanted to make King a self-contained, fully realised character on his own. I think with America, it’s a very individualistic society as you know, and so we tend to tell the stories of these men (and they’re all men) as if they were self-made in a vacuum. Whereas in reality all of us are products of our society and our communities.”

That last bit about all of us being products of our communities assumes even more significance in the historical portions of the novel, set in 1950s and ’60s Andhra Pradesh. Vara is mindful of the fact that while some American readers are much more informed about the caste system than they were, say, a decade ago (thanks to writers like Sujatha Gidla and Isabel Wilkerson), they cannot realistically be expected to understand contextual, on-ground reali­ties from 70-plus years ago. The Andhra chapters, therefore, strike a balance between information and character development. Like the passage that explains how a Dalit family originally named “Burra” came to be known as the Raos—as Vara explains, this name-switching decision was hardly limited to this family.

“These days, Appayya went on, Ambedkarite Dalits were appropriating the signifiers of high caste as a politi­cal tactic, that is, to dull their symbolic power. Appayya had taken on a new surname, Swamy, and was passing it on to his daughters. From now on, he would be called Appayya Swamy, and his daughters Radha and Sita Swamy.”

In the world Vara describes in these chapters, living as part of an oppressed community is a zero-sum game, exemplified by the character known only as “The Cripple,” a kind of foot-soldier-cum-loan-recovery-agent of the landowners in the region who’s fond of unleashing his sadism against Dalits in particular, beating them up mercilessly. In a stunning passage, we see the young King having a tense one-on-one conversation with The Cripple, as the latter whisks the boy away for a joyride of sorts. There is a fever dream quality to this passage and yet, it stays firmly rooted in the socio-political realities of the region.

Music can exist outside of language and it’s something we can all experience. And I think that’s where I was coming from, the idea of music as a medium that’s particularly alive and vibrant, in some ways the opposite of the coldness of technology,” says Vauhini Vara

“I think that’s one of my favourite passages in the book,” says Vara. “It’s a chapter I quite enjoyed writing and the character of The Cripple felt really alive to me. At several points during the novel people from two different oppressed groups encounter each other, and there’s this sense that one of them has to be trampled. If you see, King’s family and their community is bigoted against The Cripple (in fact, they gave him this name) and he is in turn bigoted against the Dalit. Again, when King meets a Vietnamese American janitor at his American university, the latter com­ments on King’s smell.”

The novel is every bit as astute about the near future as it is about the distant past. For example, at several key mo­ments in Athena’s life, there are cameos by various animals and birds. Her own father’s nickname for her is “Puffin” and early on in the novel, there’s a scene where she observes, with great interest, an eagle feeding her children. When her bodily tech starts malfunctioning a little bit, she along with the reader sees “flash forwards” of incidents that are only fleshed out in the book’s final 30-40 pages or so—in this case, the macabre image of a cat licking the blood spattered around a fresh corpse. This combination of animals and horror has come to be regarded as a staple of the futuristic, climate-change-adjacent novel; the horror is a reflection of our collective fears about the rate of climate change.

Talking about the animal connec­tion, Vara says, “Part of the subtext of the book has to do with human ambition, the mark that we leave upon this world. And I think King is trying to figure that out, as is Athena in her own way. What animals are able to bring to this book, I think, is a reminder that there’s this whole wider world that exists and is indifferent to the ambition of our species—and that in fact, human ambition runs counter to the interests of all the other animals on the planet.”

The Immortal King Rao is the kind of novel that comes along once, maybe twice in a decade. Its unique style, breadth of vision and virtuosic execu­tion will make it a favourite for the next awards season, and Vara deserves every accolade that comes her way.