Santosh Desai is a top-of-the-class ad guy, no doubt about that. And he lives up to the expectations with a series of essays that entertain, surprise and evoke nostalgia 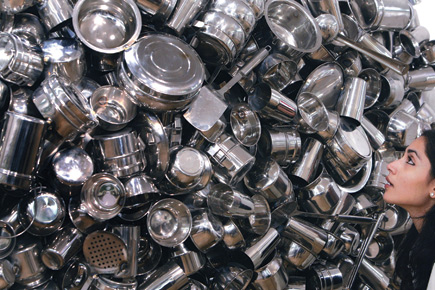 Santosh Desai lives up to the expectations with a series of essays that entertain, surprise and evoke nostalgia


Santosh Desai lives up to the expectations with a series of essays that entertain, surprise and evoke nostalgia

Santosh Desai is without doubt one of the most intelligent, articulate and insightful advertising/marketing professionals in India today. In the Sargasso Sea of dial-a-quote ‘insight’ specialists on all things India who’ll happily indulge journalists with their neatly packaged profundities on changing sexual preferences or Navjot Sidhu’s popularity, Desai, currently CEO of Kishore Biyani-owned Future Brands, is Gibraltar. He is witty, as is evident from the popularity of his weekly column in a national daily. Most importantly, he spends a bit of time thinking about questions you throw at him, and on subjects he has no opinions to offer, he’s honest enough to say so. During his stint at McCann Erickson, the agency was regarded as the best when it came to consumer research, insight and analytics.

Given such pedigree, Desai’s new book Mother Pious Lady, a series of broad brush gol-guppa-sized essays on making sense of every day middle class India, should be Top Banana, you’d think. Neatly divided into three sections, Desai offers his take on the changing aspirations of Indians, the dilemmas that come along with sweeping changes post liberalisation, and the historical baggage we carry. ‘What we called middle class values were in reality nothing more than the whole protocol of actions we developed to deal with insufficiency with diginity and grace… A comrade of our needs, an enemy of our desires, this ‘tightness of hand’ was accompanied by a value system that sought to minimise the acknowledgement of the role that desire played in our lives,’ he writes in one of his early chapters, setting the tone for the rest of the book. His skills as a keen yet detached observer come into play when he describes everyday events like a woman getting the privilege of sitting in the seat opposite the driver’s on DTC buses. ‘The bus would wait for her arrival if needed to and the crowd would part to allow her to sit in the seat reserved for her. The relationship with the driver was never remotely improper; there was rarely any conversation or even an overt acknowledgement; it remained an unspoken pact between the driver and his muse.’ A minor quibble with this otherwise enjoyable book is that it’s perhaps three years too late in coming. Middle class India, like politics and cricket, is an over analysed beast. Rama Bijapurkar, and Desai’s current boss Biyani, just to name a couple, have walked us through similar gullies. But where he scores over others is the warmth of his narrative which reassures us that Mr and Mrs Bharat are changing, but mostly for the good.