The Young Man and the City 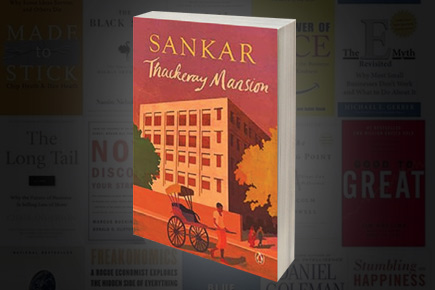 There is a young man, not exactly adrift, but looking to find a footing in the city. Not wide-eyed, nor yet hardened by knowingness, but still sensitive to the shape of experience. Amol Palekar might play him on screen, or Farooq Sheikh. And there is the restless, bad-tempered metropolis, not unkind really, only impatient in her hurry; she could be Calcutta or she could be Bombay. What does this city make of this young man? And how does he wrap and mould this great, irascible city around him? They are adversaries, comrades, partners—the young man and the city; neither is left unaffected by the other.

This is, if I may enter the unsophisticated (but tempting) business of generalisation, the overarching narrative in the work of celebrated Bengali novelist Sankar. Thackeray Mansion (published as Gharer Moddhe Ghar in Bangla) begins with the protagonist, Shankar, left without a job and a place to stay, suddenly precarious in the great city. This is the third in the author’s somewhat autobiographical trilogy; the second and much-feted bestseller Chowringhee opens with Shankar looking for a job after his barrister boss dies. (He then finds a job as a receptionist with a grand hotel in central Calcutta, in the Chowringhee of the book’s title.) The first, The Great Unknown (Kato Ajanare in Bangla) is about this same Shankar finding work as a clerk with the abovementioned barrister.

In this book, the youngish Shankar finds work as the manager of a crumbling block of flats called Thackeray Mansion. This volume recounts his delightful encounters with the residents, living and dead, and the staff of the apartment complex. There are all manner of characters: sly, shy, unpredictable, harassed, depressed, a couple of corpses even, and they walk in and out of chapters like people in a house. They render the mosaic of peoples and cultures that make up the city. It is a promising template that has been mined effectively later on by Farrukh Dhondy in Poona Company and Rohinton Mistry in Tales from Ferozeshah Bagh.

Our hero Shankar has a terribly appealing stoicism and a marvelous gift for not judging people. When a resident he is fond of becomes reserved with him after he asks her for rent, he says: ‘Such was the way of the world. I suppose relationships change when you ask for arrears.’ The book’s back cover describes Shankar as ‘innocent’, but these are not the words of an innocent, I think. What he is, is open-hearted; he is open to the tides of life.

A version of this young man appears in Sankar’s other work, too. In Seema Baddha, which was rendered on screen by Satyajit Ray, he is a promising executive who gives in to a compromise to keep his place on the slippery corporate ladder, but he is not so far gone that he is unashamed. In Jana Aranya, also filmed by Ray, he is closer to Shankar, an intelligent graduate who finds a job with a seedy Marwari businessman who nearly pimps his friend’s sister.

I am, in the most important analysis, not a good Bengali after all: I read Bangla in translation. So I am grateful to the fine labour of Sandipan Deb (and the one-man industry of Arunava Sinha). But I have a word of censure: Deb’s work reads gauche and verbose in the opening pages of Thackeray Mansion. Sample this sentence for instance: ‘Invoking Ma Lakshmi, I sat down at the Remington and our twenty fingers began frolicking fast over the keytops.’ Perhaps it is intentional, this verbiage and tendency to stretch metaphors; it might be meant to convey the garrulous universe of the Bengali; I don’t think it works well. But for the most part, Deb manages a fine balance between Bengali figures of speech and tidy, elegant English.

I am also not a very good Calcuttan. Like most of my generation, I live mostly through television, now the internet. I read food blogs to know the city’s lunch secrets. I have not inhabited the streets and corners of my city, in the way Shankar does. (Perhaps, girls never walk the city like boys do.) I did not know, for instance, till I read this that a sweet called ‘appealbhog’ is available in the High Court district of the city. In this way, my city opens up to me.