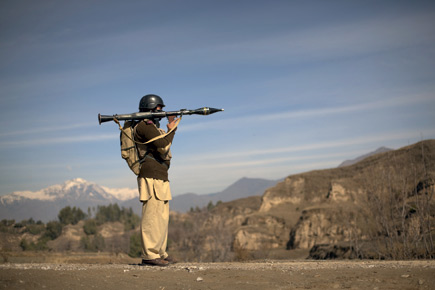 In the bunkers behind the Pakistani positions overlooking the Srinagar-Leh road during the fighting of 1999, young officers read biographies of cricketers in downtime, between firing their massive, five-and-a-half inch guns into India. A decade later, similar officers, engaged on the country’s western frontier against Islamic militants who had established enclaves, ordered tea and biscuits after clearing a town of their enemy. They sipped their scalding masala chai from china cups amidst the smoking ruins as mortar shells landed a few hundred metres away. Now, of course, the Pakistani army is undertaking operations in the critical North Waziristan tribal agencies, against a different band of militants who they and their civilian compatriots appear convinced are backed by Delhi.

This complex mix of shared heritage from shared colonial overlords—cricket, tea and mutual hostility, also arguably another of the many negative effects of British rule— is at the heart of TV Paul’s earnest but uneven The Warrior State: Pakistan in the Contemporary World. Paul, the author of 15 books on international security and an academic at Montreal University, Canada, is a very long way from Waziristan, Rawalpindi, Karachi, the Punjab or any of the other key locations whose details are so necessary to understand a large, varied country of just under 200 million inhabitants.

Paul’s thesis, repeated variously in The Warrior State, is as follows:

‘Since the very inception of the state in 1947, the Pakistani elite has held on to an ideologically oriented hyper-realpolitik worldview, as though chronically under siege… The policies of neighbouring states, especially India, have contributed to this process, but the particular policy choice to respond militarily was largely Pakistan’s own… The search for power symmetry with India has been facilitated by the geo-strategic location of the country [which] has laid a ‘geostrategic curse’ on Pakistan.’

This curse, Paul defines as similar to the ‘resource curse’ suffered by, for example, oil producing states where regimes do not actually have to implement any reforms or invest in their population to earn legitimacy and remain in power; they can simply distribute the receipts of sales of a much- needed global commodity. Similarly, states like Pakistan can trade on their strategic position to win resources from great powers, which likewise obviates the need for steps that would lead to economic development, social transformation and, sometimes, democracy. The result, Paul suggests, is the crippled, weak, ‘failing’ but nonetheless belligerent Pakistan which we know today, incapable of changing itself, condemned to sow insecurity in the region.

None of this is very controversial, or very new. Where Paul is very good is on the mechanics of the search for symmetry with India. He explains how a range of topographical, geographical, geopolitical and technical factors come together to give the poorer, less numerous Pakistanis a limited tactical advantage in certain locations such as Kashmir; around ten days on its neighbour. India has half its military strength deployed to counter a possible Chinese threat, for example, and takes much longer to mobilise its dispersed forces through a cumbersome command system. Pakistan’s use of unconventional weapons—whether proxy insurgents with AK47s or nuclear arms mounted on F16s—is another leveller. And finally, Paul rightly points out, Pakistan has done a much better job than India at leveraging assistance from great powers that have a short-term—and often poorly-informed—view of their own interests in the region, or in Asia. This success may be, as in recent times, a reward for Pakistan’s skills at negotiating by pointing a gun to its own head, but it is evident nonetheless.

There are other useful observations. Paul suggests the Pakistani army’s sense of rightful leadership of the nation— including restrictions on freedom of expression and association— derives in part from British colonial-era ideas of governance. He also borrows from leading journalist MJ Akbar and Pakistan specialist Farzana Shaikh to construct a fascinating discussion of the cultural roots of this sense of entitlement to power. It is, he says, in part because the ‘Pakistani elite’ have inherited a sense that ‘power was a divinely ordained Muslim prerogative [that] came directly from the Muslim rule in India and got projected firmly in the collective memory of the Muslim community.’ Paul suggests one reason Muhammad Ali Jinnah became latterly so committed to the idea of an independent state was his belief in ‘the glorious history of Muslim rule and cultural achievement in south Asia’. This does not explain Jinnah’s earlier opposition to the idea of Partition, but is an interesting possibility nonetheless.

The Warrior State has many problems too, however. Paul makes little effort to differentiate between different elements of the ‘Pakistani elite’, which he describes as effectively having captured the country. Any elite cannot be usefully reduced to a single entity, as Paul repeatedly does. In Pakistan, there are various contesting elements, all of which constitute parts of the elite. These have also evolved over time, allying at times, confronting at others. There is the military of course, but also the senior ranks of the bureaucracy, the commercial elite (of which Prime Minister Nawaz Sharif is a part), the civilian feudal elite (including much of the upper ranks of the Pakistan People’s Party), the judicial elite and indeed, increasingly, a religious elite too. The army may be the biggest actor, but it is far from the only actor, and Paul’s vision of total domination by the military and of the apparently closed nature of an extractive, repressive ‘elite’ or ‘state elite’ which sits on top of ‘ society’ needs to be nuanced.

The army itself is a much more complex institution than Paul seems to allow. Reading his book, one has the impression that the Pakistani military is an occupying alien force—like the Ottomans in Mesopotamia, or indeed the British in India. But the army recruits from society, and particular parts of society too. It is thus a representative institution, often reflecting as much as forming the views of society. Over time it has evolved too, reflected in the rise and fall of various elements. Earlier on, its senior officers were often landholding aristocrats, and its culture was very anglicised. In the 1970s, as men like Zia-ul-Haq, the son of a minor bureaucrat, ascended the ranks, it became much more conservative, religious, inward- looking, and less influenced by a colonial cultural legacy. The rank and file remain recruited by and large from villages in the Punjab and northern Pakistan, with long traditions of sending men to fight. These are the men I spent time with in 1999, during Kargil, and in 2008–2010 when the Pakistani army was fighting in the tribal agencies north of Peshawar. Why had they been told by their senior officers that the men they were battling were funded by India? Because otherwise, they would not have fought, as conversations made clear.

Indeed, The Warrior State is very much about Pakistan as a dry concept in international relations, and not Pakistanis. It is unclear from the book if Paul has actually visited the country, but what is evident is that any sense of the living, breathing, animated, vibrant society that is India’s ‘hostile neighbour’, as we Delhi-based foreign correspondents like to call it, is absent. Paul barely engages with the idea that Pakistanis, like most people around the world, can simultaneously maintain religious as well as nationalist identities, and that these do not in reality conflict but in fact reinforce one another. If there is any obvious major trend in Pakistani culture and society in recent decades, it is this fusion. The resultant ‘Islamo- nationalism’ is a powerful unifying factor, as is the general shift towards a more conservative vision of Islam, a trend which is linked in part to urbanisation and economic development as well as the spread of Gulf-based unitarian or Wahhabi ideologies. It has always struck me how, when talking to Pakistanis pretty much anywhere in the country, you will get the same responses to around a dozen fundamental questions about the nature of their state, the role of religion in it, its place in the world and relations with India. The army is part of this process, both proactively and reactively.

Paul is very good on the mechanics of confrontation in South Asia—the hardware, if you like—but much weaker on the social and the cultural; the software. Sadly, without one you cannot explain the other, nor Pakistan as a whole, whether it is a ‘warrior state’ or not.


The warrior state: Pakistan in the contemporary worldTV Paul

Jason Burke
Jason Burke is the South Asia correspondent of The Guardian and the author of The 9/11 Wars. His latest book is The New Threat from Islamic Militancy (Bodley Head, Rs 599, 288 pages)