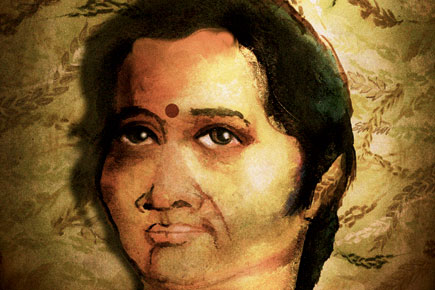 
The average reader might imagine Dalit writing to be anthemic, and engulfed in incandescent rage. For writing with a quieter, infinitely varied sort of power, the average reader would do well to get a copy of Gogu Shyamala’s book of short stories, Father May be an Elephant, and Mother only a Small Basket, But…, just published by Navayana.

Shyamala is a former activist of the Communist Party of India (Marxist-Leninist)—members of which were branded ‘Naxalites’ in Andhra Pradesh—and a Dalit, feminist and Telangana activist. She grew up in the Madiga quarter of Peddamul village in the Tandur region of western Telangana. Her father, a bonded agricultural labourer, got both her brothers to work in the fields as he was determined to send Shyamala to school, so that she’d be able to decipher complicated land deeds and ensure the family didn’t get cheated out of their small land holdings.

In her stories, Shyamala writes about the lives of agricultural labourers, drummers and performers of the untouchable Madiga community, in the half-forgotten Telugu of the Telangana region, which is substantially different from the flavourless Sanskritised tongue of coastal Andhra. From the banned yet persistent practice of jogini—the upper caste-enforced ‘tradition’ of making a Dalit girl available to all the men of the village—and landlords cheating unlettered Dalits out of their land, to Dalits being called disrespectful ‘half-names’ and verbally abused, Shyamala’s stories are underpinned by the everyday brutality that Dalit communities face. In them, hardworking Dalits who walk with ‘swift, long strides’ to match the canter of calves are juxtaposed against lazy landowners who dawdle in bed, and ‘lentil-eating, milk-drinking’ Brahmins, who grow as soft as dung-worms.

But Shyamala’s stories do more than make the margin the centre; they make the margin a place of vivid enchantments, rendered with idiomatic vitality. In these tales, set in the villages, forests and fields of western Telangana, shiny buffaloes luxuriate like queens in tanks, calves spring about with swirling and swishing tails, children flit along the bunds like dragonflies, and winter suns set like diving birds.

Many stories relate the first, stinging awareness of caste from a child’s point of view. In ‘Braveheart Badeyya’, a little boy watches, bewildered, as his mother hurriedly takes off her slippers in a thorny red gram field when an upper-caste man comes into view. In other stories, Madiga children who go to school are discomfited when they’re singled out and made to sit on the floor at the back of the classroom, or served upma in crumpled old newspapers while their upper caste and Muslim classmates eat their share off steel plates. But each one of them surmounts the implacable circumstances they find themselves in, and do so with playfulness, wit and heroic courage.

The inventive oral quality of the stories gives them an irrepressibly uplifting lilt, echoed in the music that accompanies them throughout. Tapa tapa tan tan tin tin goes the rain as it dribbles onto pots and pans through the thatched roof. Jadabuk-tak jadabuk-tak, beats out the dappu drummer, once he’s tossed back the fresh toddy he earned by playing at a funeral and belched a satisfied beev. There’s also plenty of singing. The glossary informs us that the Mala, Madiga and Sabbanda castes are known as the ‘working-singing people’ (Panipatalollu). They might toil over the landlord’s fields all day only to take home the sand-encrusted jowar that remains after the harvest, but as they do so, they sing impish songs addressed to the ‘lentil-eating, milk-drinking brahman’ and his fearsome potbelly.

When Shyamala recalls the Brahmins of her village, they’re baffling figures of fun, rather than harsh oppressors. “The little boys used to make fun of the way they bathed in the tank, with their hands cupped before them,” she says, laughing, “They’d give them comic nicknames, and would pester them by touching them, and saying, ‘Hey, what are you doing?’ Each time they touched a Brahmin, he’d duck beneath the water and come up again.” Shyamala is a small woman with lively intelligent eyes, and a tendency to burst into giggles—as the memory of those perpetually-plunging Brahmins now makes her do.

Shyamala shows that laughter can be as subversive and empowering as rage, and she does so intentionally. “People have limited imaginations. They think ‘Dalit’ is synonymous with ‘massacre’, ‘atrocity’. That’s also a part of my experience, but I want to show that there’s more to Dalit life than these stereotypes.” Besides, she says firmly, “We are not victims. The dominant castes create all sorts of disturbances in our life—they say, ‘Why get your daughter educated? She should be a jogini.’ Or say, ‘How dare you sit on a seat in the movie theatre and not on the floor?’ They try to derail our exit from our situation, to indoctrinate us into thinking that we’re like this, and meant to be like this. But none of us thinks of ourselves as low or incapable of doing what everyone else does—walking on the street, going to the movies, or getting an education.”

Going by her personal history, Shyamala is especially unstoppable. She was one of the first Dalits of her village ever to be educated. At the age of 14, she was sent away to a social welfare hostel 50 km away to complete her schooling—something that even upper caste families didn’t do in those days (the early 1980s), as panchayat and caste elders told her father then. In school, Shyamala was never asked to play kho-kho, kabaddi or ring-ball with the other children. Her name was never taken down when she wanted to sign up for singing classes, and she was made to sit in the last row of the classroom, along with the other Scheduled Caste (SC) girls. “But we told one another, ‘Great! We can sleep peacefully. Class is so boring anyway!’” Shyamala says, laughing.

After her twelfth grade, Shyamala didn’t have the money to continue her studies. “There was room rent, food, clothes, books… I couldn’t keep asking my parents for money to pay for all that.” If she returned home, she knew her parents would get her married. So she stayed on in Tandur town, and became a worker of the students wing of the CPI (M-L) . “I wasn’t a full-time Naxalite,” she says. “If I was, I’d be dead by now. I wouldn’t be here talking to you.”

Instead, she led agitations to raise scholarships and mess allowances for SCs, and travelled to villages to “raise consciousness” about social issues through pamphlets, songs and articles she wrote. She and her fellow comrades also made the occasional house call to exploitative dalals (middlemen). On one occasion, party workers found that labourers on pitifully low wages were falling sick handling chemical-laden mud used for the manufacture of soap in western Telangana. “We caught hold of the dalal, told him, ‘Do you know who we are?’” Shyamala recalls, laughing. “But what else could we do? They were killing people with that oppressive work, and we were so young, they’d never listen to us otherwise. Especially me—as a woman, and that too, a Dalit.” As a comrade, though, even upper-caste Reddy men would instantly address her with lamb-like deference, as ‘akka’. “Instead of saying I was a Dalit, saying I was a comrade gave me even more confidence!”

There were other things about the party, though, that she found less than reassuring. She noticed that the hundreds of Dalit comrades in Khammam and Karimnagar never ascended to leadership positions. She saw that while the police would think twice before killing a landowner’s son, Dalits working in the party were under constant threat of being slain in fake encounters. Every time an upper-caste comrade was caught by the police, the party held press conferences and bandhs. “But when Dalits were arrested,” she says, “There was silence.”

The silence got especially deafening around the time she had her first son, when her husband Vijay, a fellow party worker, spent close to two years in prison with a raft of false cases foisted on him. Party leaders weren’t especially sympathetic to the demands of motherhood. When she was ill, or had to take care of her son, they’d tell her, “What is this weakness in a comrade?”

Shyamala then realised that while the children of upper-caste comrades were always safely out of sight, they casually suggested she just pass her child on to someone while she went about her party work. “I thought: ‘why should I give birth to a child, just to give him away like some scrap?’” Shyamala says. “Then, I wondered what happened to the orphans of people who’d been killed in encounters. Did they live or die? Were they abandoned on the street? We’re fighting for a new dawn, but we don’t know what happens to our own children.”

In 1991, after a massacre of Dalits in Chunduru, it became painfully clear to Shyamala that there was a caste struggle on, not just a class struggle. Dalits were getting targeted, and the party only replicated the injustice they faced, denying them real respect and recognition, no matter how hard they worked. She realised that she wasn’t fighting for social justice, just for the upper castes who led the party.

So Shyamala turned to the Ambedkarite movement, and concentrated on raising her two sons and completing an open university degree in political science, public administration and history in Hyderabad. She then undertook a six-month fellowship with the feminist research centre Anveshi, to research Dalit women’s writing. Six months became five years, finally culminating in the publication of the anthology Black Dawn: Dalit Women’s Writings, 1921-2002. In the course of reading the material she’d gathered, Shyamala thought to herself: ‘Why, I can do this. I don’t have to be just the editor.’

That prompted her to write the story that the Navayana volume is named after, a vividly portrayed tale drawn from her childhood memories, with the gender and caste concerns of her adult activism deftly woven through. She included it in the anthology she edited, and submitted it to the feminist journal Bhumika. It earned her fan mail from the prominent Telugu author Gorusu Jagadishwar Reddy, who sent a long letter addressed to the ‘Rachaitri’, the great authoress whose writing contained, he said, the particular flavour and poetic charge of ‘real Telugu’. “He wrote, ‘She has built her childhood like a nest in her heart. What else might be there, waiting to come out?’” recalls Shyamala. “When the editor of the magazine told me about this, I was so happy. I thought, ‘What should I write next? People think I’m good!’”

What makes her writing great, though, is an ineffable quality that K Lalita, her colleague at Anveshi, describes perfectly in the afterword: the ability of her stories to ‘leave us in awe, amazement, happiness and pain—all at once’.