The Return of Raja Rao 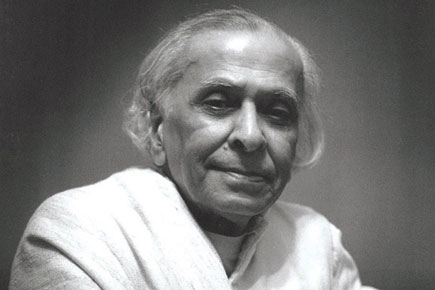 One of India’s pioneering great Indian writers is a man many may not know today: Mysore-born, Sorbonne- educated Raja Rao, author of one of our more obscure classics, Kanthapura. The world of Raja Rao, deeply rooted in lofty Hindu and Brahminical ideas, is dense and outdated for a contemporary reader; yet, it represents a crucial historical moment in Indian writing we will do well not to forget. The New York Times lauded him for ‘conveying the distinctive cadences of his native country’; The Hindu declared: ‘More than any other writer of his generation [Rao] established the status of Indian literature in English’. Belatedly, his classics find their way to bookshops in a Penguin reissue with gorgeous covers; they were previously forgotten by small publishers and mostly out of print, their bindings coming loose, though he had won awards like the Sahitya Akademi Award and the Neustadt International Prize.

In Kanthapura (1938, 248 pages), hailed as the first major Indian novel in English, Gandhi’s struggle for Independence arrives in a casteist south Indian village, in a long oral account set down at leisure. In The Serpent and the Rope (1960, 488 pages), a young scholar, Rama, meets Madeleine at a French university, and the contrasts of East and West are played out in their marriage and his quest for cultural truth. And in The Cat and Shakespeare (1965, 224 pages), a sweet tale of two friends, a philosopher clerk and his conservative neighbour, plays out in halcyon Trivandrum. The Collected Stories (240 pages) span village life and the freedom struggle, ranging from Rao’s early pieces to his mature narratives.

Rao, born in 1908, counted Mulk Raj Anand and RK Narayan among his peers, as fellow emerging Indian writers at a definitive moment; yet, he lost some of his readership as he was deified and experimented with new ground. He grew up speaking Kannada, but wrote in English; he itched against the constraints of the colonial language, yet revelled in his exposure to life abroad. Perhaps this accounts for what some see as more than customary floridness, even for someone writing at his time. Indeed, phrases like ‘a vocable of God’ abound, as do phrases like this one: ‘In that moment, for once Madeleine seemed to have intuited womanhood, as if the hair had grown rich and the belly had heaved high; as though the outer turning had slipped back inward, and she saw herself woman.’ (From The Serpent and the Rope, among the most slippery of Rao’s works. )

Yet, Rao also spoke to the truth we still deal with today: ‘We cannot write like the English. We should not. We cannot write only as Indians. We have grown to look at the large world as part of us.’ (foreword to Kanthapura). He could be pre-eminently cool: ‘I was born a Brahmin—that is, devoted to Truth and all that.’ (The first line of The Serpent and the Rope.) And he wrote of rural India beautifully: ‘The rains have come, the fine, first-footing rains that skip over the bronze mountains, tiptoe the crags, and leaping into the valleys, go splashing and wind-swung, a winnowed pour, and the coconuts and the betel nuts and the cardamom plants choke with it and hiss back.’ Both stylist and stylised, Rao is best in this great south Indian story of self-realisation.

The seminal writer wrote 13 collections of stories, five novels and five works of non fiction, leaving four unpublished novels which may well be eyed next (among them are part of his Chessmaster trilogy). Also short stories, essays, poetry in French and correspondence with Indira Gandhi, Octavio Paz, and Andre Malraux, lists literary critic Nilanjana S Roy, in her forthcoming collection of essays, The Girl Who Ate Books. ‘Reading Kanthapura in college was a liberating experience. It was the key to our own world, and to a wider world. The fierce discussions sparked off by Raja Rao’s novel of a village whose slow life-cycles are savagely interrupted by revolution led us inevitably to Manohar Malgaonkar, Bankimchandra, OV Vijayan. And Kanthapura also let us claim the work of other writers, outside both the Indian and the Western canon—like Mario Vargas Llosa’s early Peruvian novels,’ she says, in the book. Rao, who moved to the US in 1966 and taught at the University of Texas at Austin, made those kind of bridges, when they were important.

Seeing writing as his dharma, he chose a spiritual enquiry that lost some of us: ‘I think I try to belong to the great Indian tradition of the past when literature was considered a sadhana (a form of spiritual growth). In fact, I wanted to publish my books anonymously because I think they do not belong to me,” he told translator R Parthasarathy in an interview. Publishers, who his widow Susan Raja Rao courted for long in vain, have something else in mind.