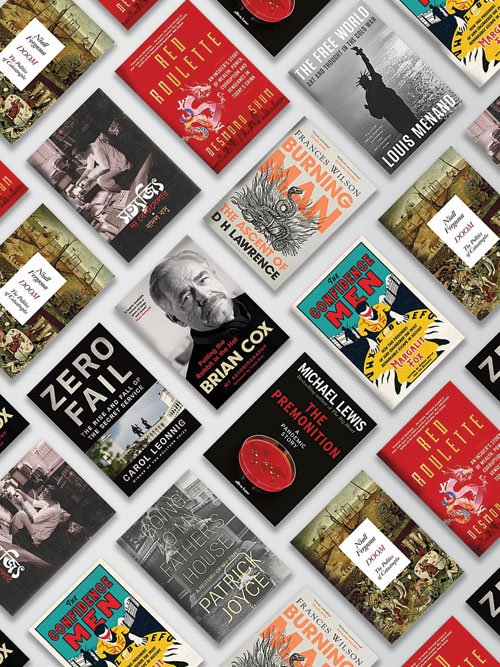 Would Oleg Gordievsky have become a double agent but for Bach? Gordievsky’s ideological revolt was fuelled by aesthetics, or his distaste for Soviet philistinism—the loudspeakers blaring patriotic mush, the banned canon of composers… Cultural historian Louis Menand’s The Free World: Art and Thought in the Cold War (Farrar, Straus and Giroux) can’t help those of us still intrigued by the unanswerable, but this 880-page tome could end right up there with The Metaphysical Club, Menand’s 2001 Pulitzer-winner. The question you’d instead ask yourself is: What is a ‘cultural winner’? America won the culture war while embracing the transatlantic intercourse: the British Invasion, structuralism, post-structuralism and what have you. The Free World, insightful, enlightening and encyclopaedic, is a compendium of delight and detail. You encounter Sartre and de Beauvoir, Lionel Trilling, Hannah Arendt, Allen Ginsberg, Claude Lévi-Strauss (calling himself “Clause L. Strauss” so as to not be confused with the jeans maker), James Baldwin (bullying Robert FK), Andy Warhol, Susan Sontag, Robert Rauschenberg and John Cage, Isaiah Berlin, Jack Kerouac, Orwell, Elvis, the Beatles, George Kennan, et al, and not in that order.Spanning 1945 to 1965, “a time when the United States was actively engaged with the rest of the world”, the book shows how prosperity, technology and social change combined with commerce to determine the culture industry’s winners. Did it produce anything of lasting value? Well, the transformations and adoptions prolonged the life cycle of artworks and ideas, often unintended, and helped in no small measure by perfect timing. Menand, generous scholar and critic, doesn’t judge but can subtly subvert, without seeming to.

Michael Lewis has got into the habit of writing books that could double as film scripts. The Premonition (Allen Lane) is not ‘A pandemic story’ of the subtitle but the pandemic story. At least, we won’t be taken to task for thinking so. Lewis, who gave us The Big Short on the 2008 financial crisis,narrates the stories of a motley crew of scientists and medics, all misfits, who foresaw the coming of viral Armageddon and warned the US administration to take the news from Wuhan seriously. They had lost but become heroes here, warts and all. The book’s villain is not really Trump, who’s more a symptom, but the Centers for Disease Control and Prevention (CDC) that failed America.

With science, and millennia of experience of disaster, on our side we should have countenanced the possibility of Covid and been better prepared. And yet, failure in the face of the pandemic was most pronounced in developed countries, particularly the US. Lazily blaming political leadership doesn’t help. Niall Ferguson, in Doom: The Politics of Catastrophe (Allen Lane) brings together economics, epidemiology, cliodynamics, network theory, and a whole host of specialised domains, to explore the history of disasters and why some societies fare better than others in responding to them. In an interview to Open, Ferguson had said, “Covid exposed the sclerosis of the administrative state.” Well, the administrative state has been sick for much longer than we thought.

EH (Harry) Jones and CW Hill were imprisoned at Yozgad in Anatolia following the British surrender at Kut-al-Amara in World War I. Largely to kill time, Jones made an Ouija board and together with Hill, with whom he shared a love of secret codes, gained the trust of the camp’s Turkish commandant. The two clever men designed a trap and soon the Turks were beholden to the Spook, a ghost that pointed them to buried Armenian gold (it’s the aftermath of the genocide). The plan, of course, was to help their Turkish captors help them escape. It worked, but not without its twists and cliffhangers. Based on the accounts of Jones and Hill, Margalit Fox’s The Confidence Men (Profile Books) is not an original story but becomes one in its telling. The non-fiction thriller of the year.

The US Secret Service is broken. And nobody knows it better than its agents—and perhaps Carol Leonnig, Washington Post’s “Secret Service correspondent” for long and now the author of Zero Fail: The Rise and Fall of the Secret Service (Random House). Formed after Lincoln’s assassination, and originally part of the US Treasury, it took another assassination of a president in 1963 to trigger reform. The service cleared its name honourably in 1981 when an agent took a bullet for Ronald Reagan. Its more recent history is sleaze (the Cartagena prostitution scandal), break-ins at the White House, uninvited people walking up to the president for photo-ops, armed gunmen firing at the residence, etcetera. Personalities of White House occupants have also made a difference: George HW and Barbara Bush were revered. The Clintons, especially the pathologically foul-mouthed Hillary (calling those trained to die for you “pigs”?), were loathed. But no president helped the service reform.


The Free World, insightful, enlightening and encyclopaedic, is a compendium of delight and detail. Menand, generous scholar and critic, doesn’t judge but can subtly subvert, without seeming to

After Kate Millett killed the resurrected DH Lawrence, the greatest saint and sinner of 20th-century English letters never quite regained his reputation. Frances Wilson, who made her name with her biography of Thomas de Quincey, Guilty Thing, has done a brave, and honest, job with Burning Man: The Ascent of DH Lawrence (Bloomsbury). Its structural mirroring of Dante’s Divine Comedy may be facile but then you have Lawrence in England (inferno), Italy (purgatory) and New Mexico (paradise). Wilson is right in locating the Lawrentian genius in the minor works and travel writing. Most importantly, she brings the man alive, cutting the timeline in 1925 with five years left of his life. There’s a Lawrence we don’t need anymore, but there’s another that can’t be allowed to remain dead.By the way, what do you think really happened to his ashes?

As far as memoirs go, Brian Cox’s Putting the Rabbit in the Hat (Quercus) is a pleasure. The story of how the “wee kid from Dundee” made it big as an actor from an impoverished tenement childhood, losing his father at eight and with a mentally unwell mother, is full of sadness and light without sentimentality. Hannibal Lecter (Lecktor), Logan Roy or…Magnus Bain? Patrick Joyce’s Going to My Father’s House (Verso) is intriguing. You don’t abandon your homeland, and neither did Joyce’s parents in moving from Derry to London in the 1950s. Their son kept going back, and here he ponders what ties that can’t be broken mean in a globalised world. But is he deliberately misremembering, as pointed out by at least one British critic about “only Irish” being spoken in Kilburn? More seriously, it wasn’t only ordinary German refugees but several Nazi honchos who too were received with open arms in Ireland. Memory is a funny thing. Desmond Shum has no qualms about baring his soul, admitting that his and his wife Whitney Duan’s business deals were often corrupt. Duan was disappeared by the People’s Republic in 2017, only to come alive on the eve of publication of Red Roulette: An Insider’s Story of Wealth, Power, Corruption, and Vengeance in Today’s China (Scribner), urging her former husband to cease and desist. There’s little to surprise China watchers here but a lot to learn about exactly how it happens.

Badal Basu’s Satyajit: The Bestseller (Saptarshi) was a fitting start to the Ray centenary year. Bringing together some of Ray’s letters, iconic (but shot from slightly different angles) and rare photos, manuscripts and, significantly, artistic evidence of the trouble Ray took to make even Jatayu’s fictitious fiction look like real books on film sets, this thin volume is a collector’s item.

Best of 2021Best of 2021 BooksDoom: The Politics of Catastrophenon fictionThe Premonition