The Master and His Magnifying Glass

This 1930s chronicle of a lower middle class youth brings out the genius of novelist and playwright Upendranath Ashk, known as the Proust of Hindi literature 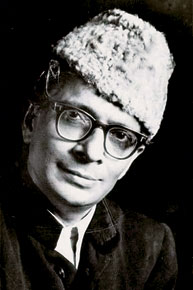 The announcement that an Important Book has arrived makes me wary, because publisher-speak is hyperbolic by its nature, and also because ‘important’ is sometimes synonymous with ‘self-consciously serious’, or ‘dull’, or ‘this weighs five kg in hardback’. But the English translation of Upendranath Ashk’s 1947 epic Girti Divarein warrants special notice. Falling Walls—completed by Daisy Rockwell 20 years after she began it—is not just one of the year’s publishing events, it is a terrific, deeply engrossing read too. And it is just the first volume in a seven-book cycle that Ashk worked on for half a century, and which he hadn’t completed when he died in 1996. (Endeavours of this scale are never quite finished, even when they are.)

The simple way of describing this book is that it is about a young man named Chetan—coming of age in 1930s Jalandhar, later living in Lahore and making an extended trip to Shimla—who wants to be a writer or do any sort of creative work, and the impediments in his path, some of which are rooted in his own personality, others in external circumstances. But this description is insufficient: Falling Walls is also a multi-layered portrait of intersecting worlds, with Chetan as the fulcrum. It is about relationships in a lower middle-class family, about young people trying to find their way, about missteps and successes, sexual awakening and minor transgressions. It is a ground-level view of three cities at a very particular time in a nation’s history. And it is an enquiry into what it takes to be an artist, and whether the effort is worth it.

All this makes it a book with big themes (Ashk’s novel cycle has been compared with Proust’s Remembrance of Things Past), but you rarely think about that while reading it, because its many little episodes work so well on their own terms. There are well-observed character portraits, such as the one of Chetan’s alcoholic father who believes fervently in the folk saying that a parent’s curses are like drops of milk and ghee (and who, like most bullies, turns self-pitying when the tables are turned on him), or Chetan’s sister-in-law, who grew up in a strife-ridden household and carries that discontent within her (‘in view of her training, it was hardly possible she’d allow an undivided reign of peace in her married home’). There are moving details that illuminate a state of mind, such as the observation that when Chetan’s mother got married and left for her husband’s house, ‘her crying was not for the loss of the joy that girls feel at their natal homes, but for the lack of joy she’d felt there’. And there are amusing descriptions: sleepy-eyed clerks at a railway platform are likened to yogis, far removed from earthly matters; a poets’ soiree is compared to a beehive that gets jostled—‘just as the bees fly out this way and that but eventually settle back in the very same place, the audience and the baitbaazi poets eventually began to gather at the Pona again’.

As the months rush by, we see Chetan experiencing the many faces of love and attraction, along a spectrum that ranges from idealised romance to uncomplicated lust. Ashk shows how forbidden love might play out in this setting— early passages involve Chetan’s oblique ‘conversations’ with a girl named Kunti, whom he likes (they can’t speak directly to each other, but each says meaningful things to a friend in the other’s earshot)—and how this can segue into bolder forms of intimacy and unexpected encounters with strangers (a co-traveller in a train; a coquettish neighbour). Or how, in a large extended family, when a young man interacts with his new wife’s attractive cousins—prone to hero-worshipping a jijaji—a conversation can acquire flirtatious shades and threaten to rupture the social fabric.

A whole setting and a way of life is thus brought alive, complete with its bucolic, often ribald Punjabi chatter (an old woman’s breasts, which she tries unsuccessfully to keep covered while she quarrels with her neighbours, are referred to as ‘yellow papayas’)—some of which is probably untranslatable, though Rockwell captures its spirit as well as anyone could. She provides valuable insights about Ashk in her preface too, observing that though he was once associated with the Progressive Writers’ Association, he distanced himself from it and chose, through his writings, to create awareness of social evils rather than offer clear-cut solutions to them. ‘He needed to find a new ‘pattern’ as he called it […] for the sort of book he wanted to write, which would depict the vast sweep of lower-middle-class reality, a creative quest and a struggle, but not, he explains, a story with a traditional plot.’

One of this narrative’s achievements is that it is wonderfully fluid even though the structure is really very intricate. As Rockwell notes, it is full of ‘memory-triggers’— often a single sentence, set apart from the text around it by a visual break, heralds an excursion into ‘the boundless and pure pastures of the past’. These memory-triggers unpeel layers for us and demonstrate one of the advantages of this sort of immense, detailed narrative: our view of the characters and their personal equations keeps shifting; the effect is akin to life itself, where you move from the comfortable certainties of youth to a broader understanding of the many dimensions of people.

So, for instance, Chetan’s elder brother Ramanand is initially presented as a naïf and dabbler, never destined to come into his own, a burden on his parents. As he fumbles, with funny results, from managing a laundry business to being a minor-league Congress leader—and treating both as the same thing—we are told ‘Bhai Sahib devoured the heaps of knowledge contained within books like a white ant; and like a white ant, his mind remained a total blank.’ In a different sort of book, this may have served as the final word on Ramanand, or he may have remained so peripheral that this one-dimensional view, at a particular point in time, would have sufficed. But here, much later, when Bhai Sahib, preparing to start a dental practice, visits Chetan in Lahore, we see him—and the brothers’ relationship—in a fresh light. Living independently from their parents, they have candid, grown-up conversations, face new challenges. If the Falling Walls structure resembles a jigsaw puzzle at times, it also made me think of a magnifying glass slowly moving from one section of an enormous canvas to another; hovering above a character, giving us some information before drawing back so we can once again appreciate how all this is an essential part of our protagonist’s world.

Each of the story’s major settings informs the mood of the book itself. It begins in Jalandhar, where Chetan is a child of a family, cowed down, under his father’s strict eye and heavy hand; then comes the mid-section in Lahore, where he works as a newspaper reporter and deals with the rigours of domestic life (having married a girl named Chanda); and finally a long section— taking up the final 200 pages— set in Shimla, where Chetan is persuaded to go with an ambitious vaid named Kaviraj, who exploits him while donning the mask of a benevolent patron.

The Lahore passages are the busiest, most conversation- driven: this warm, dynamic city leaves Chetan little time for anything other than his daily routine. He tries to write a dramatic novel, but his notebook is washed away in a sewer on a rainy night, much as his own life is being swept along by the imperatives of being a householder. But the tone shifts notably when he goes to Shimla—he is alone now, perfunctorily working on a medical book for Kaviraj, no Chanda or Bhai Sahib for company—and in this cold, relatively quiet place, he has time for anguished, drawn-out introspection; he frets about his condition, contemplates the unfairness of the world, imagines a new one where ancient walls will be pulled down.

For this reason, the Shimla passages are a little pedantic compared to the Lahore ones. But the contrast between the two places serves a purpose, raising the old question: what does a writer really need—solitude or chaos, to be alone or to throw himself into life’s rich pageant? ‘Whenever Chetan ran from life he could only find peace in the bosom of nature or art,’ we are told. Yet art doesn’t always bring him peace either—sometimes it results in humiliation, as when he sings the Raag Bhairavi at an evening concert, or goes on stage wearing his glasses while performing in the play Anarkali. He is dreamy and passive in many ways (attending a Congress meeting as a teenager, he ‘didn’t want to move like a wave in a sea of volunteers. He wanted to stand by the side and watch the splendor of the sea’) and his artistic aspirations are scuttled by the disorder around him; in one notable passage where he sits down to play a precious, newly bought flute at a railway station, bliss soon gives way to heartbreak. He writes letters with colourful descriptions (‘You know how there’s lovely tasty fruit inside the ugly bumpy skin of a chikoo? It’s the same with this beautiful, tasteful house in our filthy neighbourhood’) but can’t go much further.

Yet, throughout the book, there is the suggestion that his only real chance of becoming what he wants to be is through participating in the world and savouring new experiences, both good and bad. Often one gets the impression that Chetan, in the act of remembering incidents from his past, or thinking about the stories he has heard about someone else’s life, is performing the writerly task of constructing a narrative: shaping in his mind things that he might never get around to putting down on paper. Perhaps he does achieve this in future volumes of Girti Divarein. For now, how fortunate that he has Upendranath Ashk to do it for him.

(Jai Arjun Singh is a critic and the author of The World of Hrishikesh Mukherjee: The Filmmaker Everyone Loves)