The Man of a Hundred Drafts

Ved Mehta on a life of writing 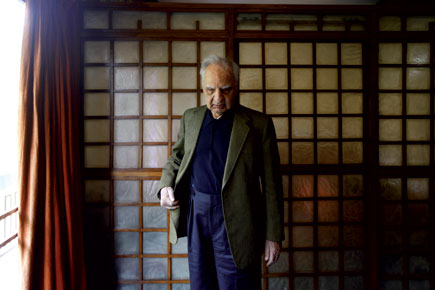 Ved Mehta on a life of writing

The stories writer Ved Mehta—polite even when he edits your English, soft-spoken, precise in speech—tells you in person are very often anecdotes you would find recounted in his enviably large body of work. Or observations he has made in other interviews, which can be found handily collated on his website. There are also some marvellous, fantastical anecdotes that make an appearance in various interviews, such as that splendid one about a reader not believing Mehta was blind because of his famously detailed descriptions, and making faces before an impassive VS Naipaul, whom he mistook for Mehta. The reader came away convinced of ‘Mehta’s’ blindness.

This offers testimony to the considerable regard Mehta holds for episodes of his personal life, and indeed what a careful chronicler he is of the everyday, of what is often dismissed as the commonplace. This is borne out in his ‘million-word plus’ 11-volume autobiography Continents of Exile—comprising well-known accounts of his father, Daddyji, his mother, Mummyji, and his uncle, Mamaji, and ending with Red Letters—which he began in 1972 and completed in 2003. In a 2009 article for Business Standard, writer and critic Nilanjana S Roy notes that ‘Nothing is exempt from Mehta’s need to set it all down , not the years of apprenticeship with Mr Shawn, the legendary New Yorker editor, not his blindness, not his sessions on the psychiatrist’s couch.’

‘[Mehta] was so adept at using small stories to cast light on a big picture,’ writes critic Jai Arjun Singh on his blog, ‘that his mentor, the legendary New Yorker editor William Shawn, developed a new rubric—“Personal History”—especially for his profiles.’

‘Mehta’s writing… often reaches large questions through small local instances,’ observes critic Michael Wood in the London Review of Books. ‘Well-chosen details represent more than themselves… The trick is to choose the details, which Mehta does with consummate, sly skill.’

We start our conversation with the time he began to write, and he speaks of a girl in his college—Pomona College, California—he was in love with. He was 20, and had decided to embark on writing his autobiography that summer. He asked her if she would take dictation for a fee. She agreed, and by the end of the summer, he had 200 pages of what was to become his first book, Face to Face. He had been told his English was ‘shaky’. No one encouraged him to write, but she did. “Do you know the word ‘amanuensis’?” he asks. I reply that I do not. He explains that it means an assistant who is more than a scribe. “She was my amanuensis.”

It is a word that comes up more than once in the conversation; he is clearly taken with it. Later, I discover that he has used the word in the prologue to the first piece in The Essential Ved Mehta, the smart, stylish new anthology of his work that has just been published by Penguin.

Mehta’s speech takes the elegant, fully-formed shape of the polished, copy-edited sentence. Perhaps this is thanks to all those years in the hallowed, error-proofed offices of The New Yorker, or perhaps the result of long years of dictation beginning with the amanuensis he wanted to impress that summer.

Mehta has always dictated his writing, though he does know how to type, and types for his personal work often. But the fact that he can’t see his errors, that he can misspell ‘taxi’ as ‘taxy’ and not know it, bothers him. “I can’t see what I write. I wish I could see my sentences taking shape. But well, that can’t be helped I suppose,” he says. Mehta was left blind around the age of 4 by an attack of meningitis. Yet his writing contains delightfully detailed description. ‘I didn’t want to be a blind writer, an Indian writer, a travel writer or any other kind of specialised breed,’ he writes in another prologue in the new anthology, ‘I wanted instead to be just any old writer.’ Singh’s conversation-based profile of Mehta offers an excellent account of how Mehta goes about achieving this.

“I thought dictation was a terrible way to write [when I started writing],” he says. “At the time, there was this notion that writing was manual labour, and you avoided manual labour if you could afford it. Then, I learnt some very celebrated writers dictated their works; Henry James, for instance, never wrote by hand. Then… uhm… James Thurber.”

Sixty years into his writing career, Mehta maintains formidable work hours, starting at 9 am after breakfast and working till 7 pm. “All of this time is not spent writing; some of the time is for reading,” he says. At the offices of The New Yorker, he was provided with an assistant from 10 am to 6 pm who read to him and took dictation; a second assistant came in to work after 6 pm. Until recently, he would continue working after a sandwich and a glass of wine till 10 or 11 pm.

Mehta says he works on close to a hundred drafts of each chapter before he can send it off to the publisher.

“Everything is in the rewriting. I don’t see anything in the writing until it is polished,” he says. Some of this fastidiousness must come from the impeccable standards of The New Yorker; every piece that was accepted for publication in his time was read 16 times, he reckons. “Once for fact-checking, once for spelling, and so on. We had a very good system in that the editing process was anonymous; writers never knew who was editing their [work]. This averted considerable animosity, because we writers can be possessive.”

There are certain structural co-ordinates he has in place before he begins a work, but not a detailed blueprint.

Mehta’s books take shape as he works. And so, he says, he delights in the little thrills of the writing process, the pleasures of the beauteous sentence, as much as the architecture of constructing a large work. “You need both. If you can’t take delight in the shorter elements of writing, you’ll find working on the larger structure tedious,” he says.

I tell him I am too easily distracted by the beauty of the graceful sentence, the well-chosen word, and Mehta asks if I think this might have something to do with my sex. “Do you?” I ask, taken aback. “No, I am asking,” he says, evenly. “It is a question.” It is a thought that has never crossed my mind; I tell him so, and we leave it at that. Later I wonder if it is not an unusual (and reductive) thought for a man resistant to labels, who strove to be known simply as a writer, not a blind writer or an Indian writer. The question asked of me amounts to an easy classification, does it not—whether I might be easily distracted because I am a woman?

Curiously for a man of his abundant output, 27 books in 60 years, Mehta detests deadlines. The way The New Yorker worked when Mehta was on its staff was deliciously open-ended: ideas were encouraged but no deadlines were issued, and there was no guarantee that the story borne of the promising idea would be carried. It meant uncertainty of income, but there was time to write. “Deadlines are basically destructive, artificial constraints. As a writer you seek to be free of such constraints,” says Mehta.

Later, when he left The New Yorker, Mehta says he was lucky to be an established writer even if his books were read by few. “There was this one time when I was writing a book about contemporary theology [The New Theologian]. Fortuitously, this was when everyone was writing about the new theology, and there was some pressure on me. Other than this, I have been able to successfully avert deadlines.”

Mehta also dislikes, and shuns, the promotional endeavours expected of authors today—the multi-city book launches, the appearances at literary festivals. “Any literary event with more than three or four writers is not a festival. It is a mela,” he says. “It all takes away time from writing. I should be dead by now; I want to use my time well.” Yet, in spite of his impatience with melas and presumably interviews, he is faultlessly courteous. My colleague requests Mehta to stand for a photograph, and he is annoyed but calm.

There is an astonishingly nasty story on Mehta floating around on the internet in a magazine called Spy, which describes him as a slave-driver, his assistants christened ‘Ved-ettes’. The article, whose accuracy cannot be verified, describes him as cruel, personal in his comments and sexist with assistants. But the Mehta I meet apologises for not offering me coffee.

At one point he corrects my English: “There is nothing called ‘line-edits’. You edit sentences, not lines. Text-editing is better,” he says. But almost immediately, he apologises, “It is rude to correct people’s language.” And when we say goodbye, he inquires almost avuncularly, “Are you sure you have got everything you need?”