“The longer you live somewhere, the less you see”

William Dalrymple on why he will never be able to write City of Djinns again, and on isolating himself in his world of books 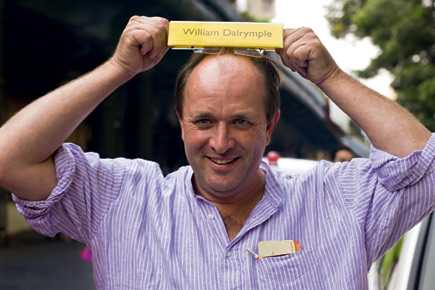 William Dalrymple on why he will never be able to write City of Djinns again, and on isolating himself


India has been home to William Dalrymple for a great many years now. He finds himself in a strange position: part-outsider, part-insider. Even as he’s gaining an insider’s view of the country, he finds that his time spent here is robbing him of the outsider’s perspective.

Q When writing a book, do you find it hard to switch off from the world?

A When in the middle of one, you become much less a part of your domestic life. When it’s going well, you spend less time in reality and more time in places like 18th century Kandahar— like I am right now. When it’s not working out well, everything seems to intrude, and you can’t fixate on the world you are writing about. And if you are living in the other world, every distraction is a chore—I put off things like writing cheques and paying bills. But it’s a good sign when the grip on reality is the least. If it’s not going right, everything else will take up your time.

Q Is writing a chore sometimes?

A That depends on whether I am in the middle of a book or not. If I am researching a book, my body clock changes. I wake up no later than 7. In that phase, I am relatively disciplined.

A I have a fantastic place to sit—it’s like a small room that is neither shut nor open. It gives me the opportunity to sit outside and work, without letting all the sun in. I can’t write in a café—I have heard JK Rowling does that—because it’s different with non-fiction. I have a huge desk with all my reading and research material and I need all that with me.

Q What’s the best part about writing a travelogue?

A The best part is travelling! I haven’t done that much in the last 10 years, though. The pleasure and excitement that you feel when on an interesting journey is the best. All the real serious travelling I did was when I was younger, backpacking. I remember taking buses in India and sometimes sleeping in station rest rooms. These journeys change the way you feel, very unlike the middle-aged journeys you take through five-stars. With Nine Lives, I did manage to go to places I had wanted to go to and didn’t know much about—like rural Bengal and northern Kerala. It was a lovely sensation to get back on the road.

Q How tough is it to write about the history of a country you don’t belong to?

A I am not Indian and I will never be, but it’s pretty much home to me now. I know much more about the history of India than I know of my country, Scotland. All my professional research has been about India. There are advantages and disadvantages about writing about a culture other than your own. You haven’t grown up studying it, so there are a few absences. But many of my readers have told me that I have taught them bits about their history that they didn’t know. I have got to know some time periods very well, like the 18th century (while researching for The Last Mughal). However, the longer you live somewhere, the less you see. I don’t think I could write City Of Djinns again. I know much more now.

Q How does living in India feed your creativity?

A It’s a huge bonus to be here. I constantly run into things I want to know more about and follow up on them. And most things open up a new series of interest. In the old days, I knew more about politics and other headlines as I was actively working as a journalist as well. It depends on what you are working on. I never thought I would visit Kandahar for a book, but I dared to go there now for my new book.

Q Samuel Johnson said, “It may I think be justly observed that few books disappoint their readers more than the narration of a traveller.” What are the things you keep in mind to not disappoint or alienate?

A Travel writing is like photography—anyone can do it, but few do it well. It takes a real master to produce good travel writing like In Patagonia by Bruce Chatwin or Maximum City by Suketu Mehta, which I regard the greatest book written by an Indian of my generation. The bristle clarity of prose and extraordinary observations about places and characters is most important. And the difference between fiction and travel writing is that it can inspire you to travel. In fact, most of my travelling has come from reading travel writing.

Q Chetan Bhagat asked Open recently, “What is good writing and bad writing?” How would you answer him?

A There is high literature and pop literature, it all depends on who it is aimed at. There is also literature that works and doesn’t work. Not every piece of music has to be Mozart, and the same way, not every piece of writing can be Tolstoy. If Chetan touches a chord with the call centre youth and sells lots of copies, he must be doing something right. But when you are faced withtrue high literature, it’s quite easy to recognise.

Q You had once spoken about the danger of sensationalism while writing about sensitive subjects. Most people would say sensationalism is good for a book. Do you shy away from it?

A That quote was also taken out of context. Well, it depends on what you are writing. When writing a newspaper article, you may be failing if it’s not sensational. In Nine Lives, where I was talking about religion and people who give their lives to religion, I wanted to not judge. You can’t criticise, as you are doing so from a different universe. My views are clear between the lines—but I don’t need to say this is right and this is wrong. I try and understand them.

Q Does criticism faze you?

A When you get an idiotic reviewer who obviously doesn’t understand the book or maybe hasn’t even read the book, it irritates me, but does not upset me. What’s to be taken seriously is when you come across an intelligent criticism by a reviewer who has actually gone through your book. There is no harm in taking on board good criticism. I remember a rigorous criticism by Gyan Prakash in The Nation. He really understood what I was saying and disagreed. And so I wrote back to him, and now we are friends. But if it’s just a stray egg thrown by a squab, it doesn’t matter.