As the patriarch of Malayala Manorama, one of India’s largest media groups for almost four decades, KM Mathew played a seminal role in shaping the political and cultural life of Kerala 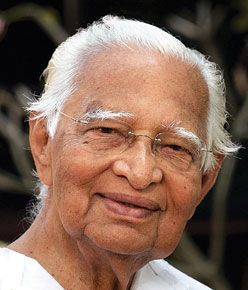 During the course of an interview many years ago, this writer asked KM Mathew (1917-2010), the patriarch of the Malayala Manorama media group, the secret of his “anti-Communist” newspaper’s huge popularity in a Left-dominated society. Smiling disarmingly, Maathukuttychaayan (elder brother Mathew), as known to his friends and staff, quipped, “That is exactly the secret. Every Left person here is keen to know what the hell Malayala Manorama says about them. So, now you know that we are not anti-Communist by nature, but it’s only our market wisdom!”

Of course, the titan who bestrode Kerala’s cultural world for decades was speaking in half-jest. But indisputably the 125-year-old Manorama has long reigned supreme in Kerala’s crowded and vibrant media market. It is also India’s third and the world’s fifth largest circulated newspaper. And Mathew should know. For it was during his nearly four decade-long innings as its Chief Editor (from 1973 until his death) that the paper witnessed its mind-blowing growth. Circulation soared from just about 200,000 to 2 million; number of the paper’seditions from one to 17, including a few in the Gulf; publications from two to 20 in various Indian languages besides the group’s two television channels and FM radio stations. Mathew was instrumental in modernising Manorama by insisting on state-of-the-art technology in production and professional excellence imparted to the staff through top international trainers.

Surely, the journey was far from easy. The paper has weathered persecution by authorities and competition from rivals. Mathew’s autobiography, The Eighth Ring (Penguin Books India, Rs 699, 418 pages) narrates this saga and the people who made it. In his famously simple and humble vein, Mathew tells a riveting story of hard work, tears, spirit, ambition, joy, pursuit of quality and the vision. And above all, the formidable family values that created Manorama. It is no mean feat for a newspaper founded by Kandathil Varghese Mappillai (1857-1904), Mathew’s scholarly yet financially humble grandfather, in late 19th century in the small plantation town, Kottayam. Though it has since grown beyond recognition during these 125 years, what remained unchanged is its ownership and the vision which strictly remained within the Kandathil family. The family belongs to the progressive Syrian Christian community, which was the state’s pioneer in the fields of education, media, plantations and industry. The community’s achievements could be traced to the foreign missionaries who had laid the foundations of all these in Kerala.

The Left’s consistent charge that Manorama is Kerala capitalism’s mouthpiece was not entirely wrong. This group literally led the advent of capitalism in the region. The Malayala Manorama Company was not only the first joint stock company started by a Malayalee—in 1888, with a capital of Rs 10,000—it was also India’s first joint stock publishing house. It was also the same family which set up one of Kerala’s earliest banks, the first insurance company, and many plantation firms for rubber, tea, coffee, etcetera, apart from the tyre company MRF. It was Mathew who, after graduating from Madras Christian College, joined the family’s rubber plantations and helped start the small toy rubber balloon firm that grew to become India’s top tyre manufacturer.

It was the legendary KC Mammen Mappillai (1873-1953), Mathew’s illustrious father and predecessor as Chief Editor, a much respected journalist in his time, who set up the family’s vast network of businesses too. It was also Mappillai who had suffered the most during his relentless effort to build empires in media and other fields. He had to face the wrath of Sir CP Ramaswami Iyer, the autocratic Diwan of the erstwhile native state of Travancore. Enraged by Manorama’s support to the state Congress which was leading a struggle against the royal government, Iyer clamped down on the paper for nine years from 1938 to 1947, imprisoned Mappillai and four of his cousins (one of whom even died during the incarceration), liquidated the family’s prosperous bank which had branches even overseas, and forced it to sell its insurance company. This led to much economic hardship for the family, but they kept up their spirit. With the advent of freedom and the end of the royal rule, Manorama was revived with great difficulty. It has never looked back since.

It goes to the credit of Manorama’s professional skills that in spite of its pro-Congress political leanings, the newspaper topped the circulation charts. It has not tried to hide its affiliations. Mathew writes that the paper supported Indira Gandhi when the Congress split. But he refused to accept the Padma Bhushan offered to him when she was Prime Minister. When PC Alexander, Indira’s principal secretary and Mathew’s close friend, called him to convey the news, he said, “No, I do not want to give the people a chance to say that we supported the Government led by Indira Gandhi all this while in the hope that I would be given a Padma Bhushan, or that she is conferring this award on me in recognition of that support. That would damage the credibility of Malayala Manorama.” In 1998, the United Front-led Government offered him the award again and he readily accepted it. He received the award when the BJP was in power ‘when Manorama was openly voicing its disagreements with some of the policies of the BJP government’.

Notwithstanding Manorama’s differences with the Left, Mathew kept warm relations with its leaders. Communist stalwarts like EMS Namboodiripad or MN Govindan Nair were close family friends. Mathew recalls the friendship his father had while in prison with P Krishna Pillai, the founder of Kerala’s communist movement, and the letter EMS wrote when Manorama was banned in which he praised its fight against royal autocracy. However, this did not deter either side from changing its convictions. The Left never missed a chance to remind people that Mathew’s father had once (allegedly) said that he would take poison if ever the Communists came to power in Kerala. EMS once famously said, “If Manorama writes something good about me, I’m sure I would have done something terribly wrong.” EMS never forgave the newspaper for the ballast it provided to the ‘liberation struggle’ which dislodged India’s first Communist state government that he led in 1959. However, although not too friendly towards Communism, Manorama has from its beginning voiced itself in favour of the rights of Dalits and other depressed castes. Even its very first editorial was about Dalits’ right to education in Travancore, which was then under upper-caste hegemony.

Since Mathew’s demise, his three sons have been at the helm of the empire. Mathew saw to it that all of them had trained at top newspapers abroad before they came on board. Now their sons—the fifth generation—after routine media stints abroad, have joined the family business. Though Kandathil’s daughters have always kept away from it (a Syrian Christian tradition), the daughters-in-law, since the late Ms KM Mathew (a culinary expert) onwards, have been in charge of various publications.

(MG Radhakrishnan is a senior journalist based in Thiruvananthapuram)