Two Delhi debuts take on questions of ownership and identity in the city that is never fully awake. One does better than the other 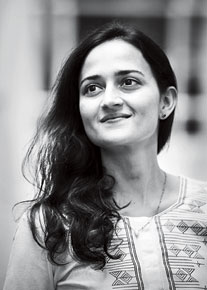 Two Delhi debuts take on questions of ownership and identity in the city that is never fully awake. One does better than the other

Whom does Delhi belong to? The question is as old as the city itself. Does it belong to the politicians, to the industrialists who make deals over squash or golf, or to the city’s notoriously corrupt policemen? Does it belong to the cool kids who practically grew up in the city’s nightclubs, or to the ones who arrive in the city by train, VIP suitcases and the dream of entire families in tow?

Saskya Jain’s Fire Under Ash is peopled with all these usual suspects. The plot twists itself fast and furiously into a predictable love triangle: pretty girl, rich boy, poor boy. The latter, Lallan, is a history student from Patna, which is used as shorthand for the provinces, or, more accurately, what Delhi thinks of the provinces. The rich suitor is Ashwin, son of a Delhi industrialist; Mallika is from Jaipur, making her sympathetic to the Patna boy’s rawness (though somehow devoid of any naivety herself.) There are cars, nightclubs, bratty friends, the sister who works in downtown Manhattan, the socialite mother planning her anniversary garden party on her way back from the hospital with her injured son.

The author tries to make Ashwin disaffected and charming, an insider-outsider in this wealthy milieu, but rarely succeeds. The novel begins with his grand bid for independence. Instead of going to Columbia University, he chooses to go to a local college and moves out of his parent’s house—to his parent’s guesthouse, a ‘shed’ on the edge of their compound. More rebellions follow and sympathies start to veer towards the beleaguered parents; the arc of Ashwin’s transformation ends with a melodramatic speech delivered at his parents’ anniversary party. Surely a young man’s quest for self-determination does not have to be this banal.

What is a little less predictable, a little more stimulating, is the unusual friendship that forms between Lallan, Ashwin and Mallika. Not realising that he is in love with her, Mallika begins to harbour an affection for Lallan, who identifies it as a form of tolerance: ‘He knew that when Mallika looked at him, he saw a fleeting recognition, an acknowledgement, of their shared background that lay beyond Delhi… he knew that this feeling was rooted in their shared secret: she repulsed herself, too, just like he repulsed himself.’ Though Lallan and Ashwin are rivals in love, they bond, if a mixture of condescension and curiosity can be called that. The novel finally comes into its own when this bond gets tested; a hedonistic party is busted by cops, Lallan and Ashwin end up in jail, the latter is rescued by his rich dad, Lallan is stuck inside.

Briefly, we get a glimpse of the author’s fierceness and empathy as Lallan veers maniacally from hope to misery; Delhi will be nothing more to him than the city on his Azad College diploma, he resolves. By the time Ashwin’s driver comes with the money that will rescue Lallan and send him hurtling back to Patna, it is too late, he has suffered too much. The epiphany that follows feels earned: ‘There was no such thing as a life-changing event. There was merely a culmination of something that had taken root and gained momentum over a period of time, the long, flickering trigger that ultimately set off the explosive.’ Several pages later, Ashwin reaches a similar conclusion. At his parents’ anniversary party, his mother invites him to deejay: ‘ “The last time I refused to let my son DJ a party, he decided to turn down his admission at Columbia University.” The crowd tittered. Everyone knew the story. Ashwin felt the familiar sourness in his stomach. What he had thought of as the defining act of his adult life had already become a party anecdote.’ A character who does not know the difference between a defining act and a party anecdote in a novel that teeters on the edge of that gulf between drama and melodrama.

When Lallan goes back to Patna and meets the young woman he cannot marry now and tells her his story, she dismisses it and him: “Delhi is like that. Crazy without being interesting.” Despite the occasionally lyrical writing, the judgment could well apply to this ‘Delhi book’ as well.

There are policemen in Avtar Singh’s Necropolis as well. But they are not the bored, sadistic monsters in Fire Under Ash. DCP Dayal from the Crime Branch, his subordinate Kapoor and Smita Dhingra, an IPS officer on loan from the cyber crimes unit are, to put it mildly, incorruptible.

When an author asks boldly for such an extreme suspension of disbelief, he had better deliver. And Avtar Singh delivers— a rich, intriguing noir collection of stories that casts an eye that is both poetic and sardonic over Delhi. To begin with, the crime itself is unusual; a ‘digital’ monster of the night collects fingers. And Singh is not afraid to take the story in an even more surreal direction—a fashionable woman at a nightclub transforms inexplicably into an ageless muse.

It helps that DCP Dayal has a very melancholic sense of Delhi’s history. In an early story, he wonders why no one heard a rickshaw driver scream when his finger was amputated. “It was ever thus,” he muttered. “Mir noted it when Nadir Shah and Abdali sacked Delhi. The refugees were harassed by their own countrymen. Nobody listens, nobody cares.” He knows djinns have walked in Feroz Shah Kotla, that there are tree spirits in Mehrauli, that the city was built on graveyards and cremation grounds. And when he encounters Razia, a mysterious, ageless creature of the night, the poet in the police officer knows not to ask too many questions.

In Singh’s writing, we see Delhi not just in the sweep of its imperial history or the glamour of its nouveau riche but also in the quotidian micro-behaviours of its middle-class. When DCP Dayal wends his way through an alley in one of Delhi’s urban villages to Razia’s house: ‘A north-eastern woman hurried past in the opposite direction, her mobile phone at her lips, urgently telling a driver at the mouth of the lane to wait for her… There were eyes on him from balconies and from windows, even from a little set of young men taking it easy on the street. He felt how anonymity and communality could coexist in the same place and time, and knew what it was to be both naked and secure.’ In another story, Smita observes those around the scene of a crime: ‘They were confused, delighted to be in the limelight and hoping to be asked what they thought by a wandering reporter, but saddened that their fifteen minutes were to be forever so tainted.’

My favourite story is about a preschooler kidnapping; a wave of crime overtakes the city in April as kindergartens unveil their admission lists. And while the crime is serious, Singh has fun with the milieu. So, for instance, when Smita is talking to the teachers of the kidnapped child: ‘Just shows you, doesn’t it, said one of the teachers quietly. You can have everything in this world. And it still isn’t enough. The others looked at her as if she’d been caught giving the gardener a hand job behind the children’s toilet. Then they noted the absence of an interlocutor who would judge such an utterance, shrugged, nodded and returned to their tea.’

For those who like their crime fiction meaty with police procedural detail, this book will disappoint. There are no clever twists of logic and forensic evidence; instead, allies are pitted against each other. In the typical detective novel, the crime is an aberration that has to be resolved so the world can be restored to pre-lapsarian innocence. But in Singh’s noir vision, the crimes are symptoms of a marvellous, diseased society. Solving one does not solve anything. This is both literally and metaphorically true; a kidnapper escapes an intercepted police van taking him to court, but that’s the least of Dayal’s problems. He has committed ‘the solecism of pursuing a case nobody wanted solved’. It’s a valiant, losing battle and it is not innocence at stake but knowledge; knowledge of the city. The honour of manipulating its history.

So who does Delhi belong to? Singh would have us believe that it belongs to Razia, to the eternal spirits that watch over the city, nourishing its heroes with love, luring its villains to their punishment. I wish I could believe that. My vote goes instead to Kapoor, the subordinate officer ‘heavy of manner and midriff’, who has family in Lajpat Nagar and Model Town; whose ‘nephews’ work in a nightclub in south Delhi and in police stations in the outskirts of Delhi, in Kapashera and Mandi and Kundli and Kanjhawla, where crime takes the shape of cattle-stealing; whose niece he loves dearly but ‘made a wrong turn. Got mixed up with the wrong man’. Delhi belongs to the Kapoors, the uncles, the ‘good men of India’. And some day soon, to the Smitas as well. n