Contemporary artists explore the power of illusion in our lives 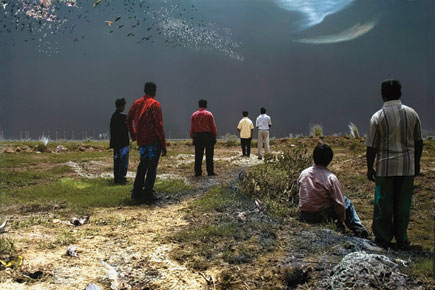 Contemporary artists explore the power of illusion in our lives


Doubtless, Pablo Neruda’s Twenty Love Poems has made the life of countless lovers the world over far easier each time Valentine’s Day comes around, arming them with a quick, sure-to-please gift for their beloved. Now, a line from (the rather charmingly titled) Your Breast is Enough has been lifted, and, in a metaphor even the Chilean poet would have approved, been given wings.

In You is the Illusion of Each Day, curated by Maya Kóvskaya, features a host of contemporary artists, including Dilip Chobisa, Neha Choksi, Han Bing, Pooja Iranna, Ranbir Kaleka, Niyeti Chadha Kannal, Sonia Khurana, Malekeh Nayiny,  Prajakta Potnis, Raqs Media Collective, Kartik Sood and Michael Zheng. It attempts to explore the power of illusion in our lives. A good place to begin is the installation piece by Michael Zheng, which consists of a pedestal placed against a wall with a miniature sculpture balanced on its very edge. The viewer only realises it’s the stub of a sandpapered book when she looks behind it. The book, as well as the work, is titled Utopia, and conjures, literally, entire imaginary worlds both literary and otherwise. Ranbir Kaleka, on the other hand, actually creates a magical, luminescent universe in his photoprint and oil painting on canvas, Contested Desires, which shows a group of men on a grassy hillock looking towards the sky—only that where the sky should be is a fantastical underwater scene with schools of fish and the hint of larger, primordial marine creature. The effect is one of walking through an aquarium without a separating glass.

This curious intermingling of land and water continues in Han Bing’s work comprising photos from his series Urban Amber, an exploration of China’s middle-class desires and dreams. They feature soaring high-rise apartment blocks layered over by garbage-infested rivers. In one, Coiled Dragon Pillars, carved stone pillars rise and disappear into dark sea-green water; and in Withered Lotus, there is a disorienting inversion of earth and sky.

Moving away from spatial chicanery is Sonia Khurana’s Zeotrope, a cylindrical device with narrow slips on the sides that produces the illusion of action from a rapid succession of static pictures. Highly popular in Victorian England, the zoetrope is taken from the Greek for ‘wheel of life’—throwing up numerous allusions, from religion and spirituality to carousals and fair grounds. Khurana’s work shows a woman singing or acting on a stage, cleverly doubling the levels of illusion at work—the device itself and the ‘performer’ within it.

One of the most personal, and poignant, works in the show is a photographic diptych by Iranian-born artist Malekeh Nayiny. Traces shows her first with her back to the viewer, a stream of photographs spilling from the top. In the second image, she stares out with the photos pooled at her feet. Nayiny explains on her website that the project was born when she returned to Iran many years after her studies in the US and lost her parents in rapid succession. “All that was left for me were traces of their lives: their objects, their letters, and abandoned pictures from the past, evidence of their one-time presence in this world.” It is pertinent then that her own features in the image are softly erased— a foreshadow of her own mortality, when she too will transform into a ‘trace’.

The show brings together an eclectic, absorbing collection of works; yet, given the potential of the theme, seems quietly under-wrought. Henry Miller, that most provocative writer of erotically-charged prose, standing at the opposite end of the literary spectrum to Neruda, once said “Imagination is the voice of daring,” and that is exactly what this shows needs—to push beyond the expected, to be Promethean.

In You is the Illusion of Each Day shows at Latitude 28, Delhi till 5 November