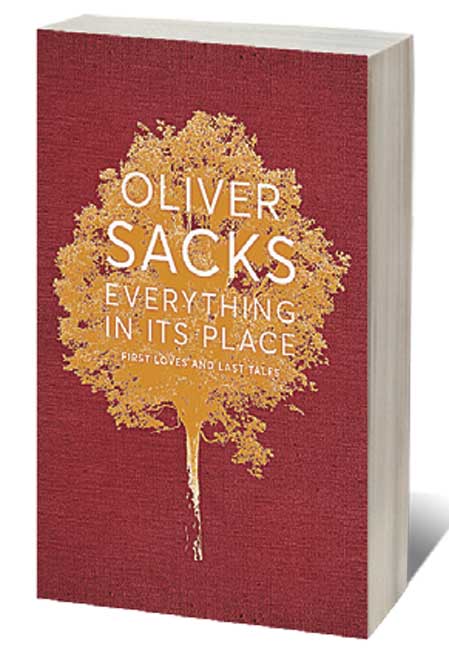 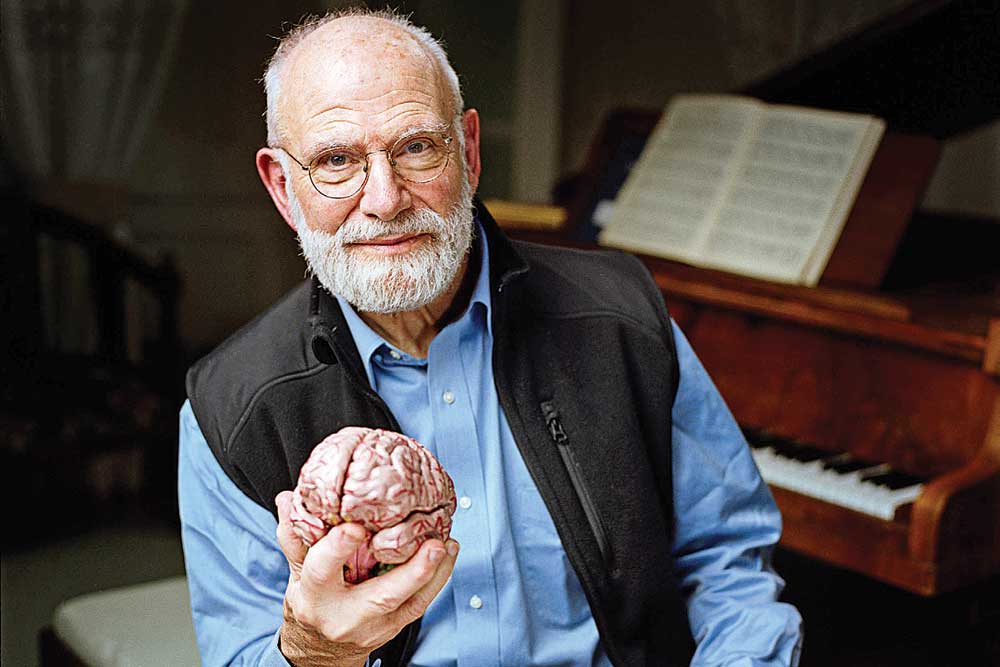 
HOW DO YOU say goodbye to someone you never met? Oliver Sacks is one of those writers with whom one’s conversation is never finished—and reading him here is understanding how often the valuable space it creates loops back to earlier forums, in the terrifying lead-up to the terrible 2020s. Fifty years a physician, and a writer and passionate thinker for much of this time, he considers how precious and untenable life is, in this valedictory collection of essays he did not know would be published when he passed away in August 2015.

The third posthumous work by the ‘poet laureate of contemporary medicine’ (The New York Times) and probably the last—unless more work is found or reworked—Everything in Its Place is a farewell curated by Kate Edgar and Dan Frank, two editors who worked with the British neurologist, together with Sacks’ partner, Bill Hayes. If you have read even a few of Sacks’ 15 moving, accessible books—notable among them the modern classics Musicophilia and Awakenings and the best-selling The Man Who Mistook His Wife for a Hat, with their landmark medical histories, as well as his wonderful memoir, On the Move— you are back in familiar territory, here. That pleasurable sensation of rubbing up against the familiar in an unfamiliar world; Sacks’ fascination with the most obscure details and the innocent pleasure taken in everyday joys raised to the magnifying glass; the stimulation Sacks finds in the miracle of human life and the charm of the journey he takes to this discovery; here, still, is the contagious, ever-prevailing joy of reading him. For Sacks stepped out of the clinical aura of the hospital and met the layperson in their world. He arrived at a place where the verbigeration of someone with Tourette’s is seen as a gift as well as an affliction (‘Travels with Lowell’ in this book, based on ‘The Divine Curse’); at a moving appreciation of the complicated glory of Humphry Davy, 18th- century poet of chemistry and inspiration for everyone from Coleridge to Mary Shelley; at an understanding of the fantastic joy of Sally Greenberg, who experiences a strange and exhilarating summer of madness which we can sense Sacks thrills in, even as he fears for her.

From the kind and funny genius who relishes the night he is locked into a museum in South Kensington even as he contemplates patients who teeter on the edge of oblivion comes a fine and final appreciation of life—at a point when many of us are wondering if the human race has anything to contribute, given how much it decimates. If life as we know it has gone, if the man who understood the human brain intimately and finally fell in love in his seventies is finally gone (without ever having needed a cell phone), how will the books and vision of Sacks fare in future?

Made up of three parts or movements, this book addresses this unspoken question bravely through 33 essays. It begins with the impression of a young Oliver navigating water bodies around the world, growing from this womb-like space into the world itself (‘Water Babies’ originally appeared in 1997). Through six personal reflections, he advances closer and closer to the beating heart of his enterprise: part two, ‘Clinical Tales’, moving from considerations of hiccups to pathogens to a beautiful appreciation of asylums. It is with a heavy heart that we approach the third and final part, which, while extending Sacks’ great curiosity about and fascination with life and how we live it, puts our faces up to the great dilemma of how to live life even as it quests after life on Mars as far back as 2002, in the simple and rather sweet essay, ‘Anybody Out There?’.

‘Writing gave Oliver such joy it was infectious to those around him,’ writes Hayes, in an essay on Literary Hub (‘On Editing Oliver Sacks After He Was Gone’, April, 2019), describing how Sacks always thrilled at ‘getting’ his writing in print and cared little for the prestige accorded to where a book was published. At a time when the latter is the end goal of many a young writer, it is refreshing to have a veteran remind us of the very real values and pleasures that lie at the heart of the world of letters, and which make it worthwhile to pursue the life that places it foremost.


Oliver Sacks stepped out of the clinical aura of the hospital and met the layperson in their world. He arrived at a place where the verbigeration of someone with tourette’s is seen as a gift as well as an affliction

‘Duns Scotus, in the thirteenth century, spoke of ‘condelectari sibi,’ the will finding delight in its own exercise; and Mihaly Csikszentmihalyi, in our own time, speaks about ‘flow.’ There is an essential rightness about swimming, as about all such flowing and, so to speak, musical activities,’ says Sacks, in ‘Water Babies’. Likewise, the flow of Sacks’ prose finds solace in its course, its considered, sometimes repetitive but always compassionate eye and unidirectional gaze, taking everything into consideration, from ‘the primary insult’ to ‘cauldronous’ conditions of the mind.

It is not just the revisiting of the familiar-unfamiliar that is thrilling here. Sacks shaped Gratitude (2015) and The River of Consciousness (2017) with a view to defining the end of his own part in a larger engagement. As the 19th-century Russian psychologist and neurologist AR Luria spoke to Sacks, shaping his narrative of personal histories and skills as a medical storyteller, Sacks influenced a tradition of medical storytelling which came after and alongside him. In shaping this collection of essays, seven of them unpublished (one of these is an altered version of a previously published essay), four years after his passing and without the guidance of his steady hand, his editors use his words to perpetuate his vision with a narrative of their own. The beauty of Sacks’ vision lies in seeing the dance between beauty and truth through the prism of scientific advancement, the vital combined music of science and art. Reading him, you feel like you are speaking with a friend, one who knows you well though you have never met, one who understands everything you have experienced from the larger perspective of the human race as a whole, as well as the one of the individual subject, up close. It is as both a friend and a physician that he offers up the wisdom of ‘abysmal elation’, when speaking of patients with mental health issues. And, for the most part, this voice is utterly present in Everything in Its Place— though Sacks’ absence can be felt in its structure.

The effect is comforting, but not always consistent, particularly in the third section of the book, 12 essays which escalate a sense of simultaneous elation and panic, which is appropriate but not always smooth. ‘Orangutan’, for example, is a sweet, short, set piece, but it stands out against the other pieces in ‘Life Continues’. The energy is sometimes static, where Sacks would, some readers might be justified in feeling, have complicated it—as is beautifully evidenced two-thirds of the way in: ‘What a narrow ridge of normality we all inhabit, with the abysses of mania and depression yawning to either side.’ Readers might be justified in thinking that everything isn’t in its place, and never can be, in wishing for more to round out this book—while realising the limitations of what was undertaken.

Through the editors’ efforts, at least we get a little more time with Sacks. There are no easy answers, even if Sacks chooses to believe in our persistence and resilience. How much longer will the traditional sources of comfort see us through the digital and social media age, as Sacks posits in the final essay in the book, a widely published reminder of the tremendous toll the age of distraction will take, when it appeared in The New Yorker earlier this year.

With perceptible pain, reflecting on a moment wherein zombie parents ignore their children for glowing screens which call them to a darker universe foretold by many, he admits: ‘But it may not be enough to create, to contribute, to have influenced others, if one feels, as I do now, that the very culture in which one was nourished and to which one had given one’s best in return is itself threatened.’