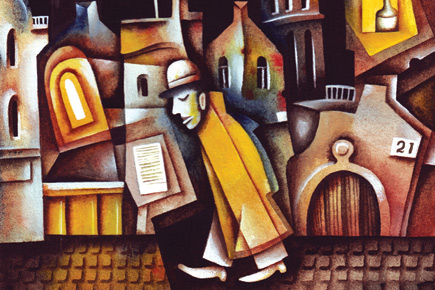 
Ruth Padel is a well-known poet, nature writer and critical reader of literature, but Where the Serpent Lives proves she has equal control over big pictures that sweep across generations and continents, telling tales of intertwined lives, lost loves and recovered selves. The book is a rollicking good read—I read it through at a stretch, compelled by the characters and the plot as much as I was utterly enchanted with the words and images that skitter off the pages in their joyful abundance.

Rosamund lives in London with a philandering husband and an increasingly distant teenage son. She has been estranged for years from her father, a herpetologist who lives in India. Rosamund’s life is pale and melancholic, the loves that once filled it now beyond reach, the pain that could have sharpened her senses now a numbness. Her best friend, Irena, brings some laughter into her life and it is through her husband, Richard, that Rosamund has a chance to reconnect with her father, and perhaps pull out the thorn that has lain in her heart for decades.

Much of the story’s physical action takes place in the jungles of the Sub-continent. But it is the city of London that provides the landscape within which the taut emotional register of the characters’ inner lives is played out, and ultimately, darkly resolved. Padel uses the countryside, both Indian and English, to express her larger concerns about conservation and the environment. Her formidable knowledge of the natural world  shines through, even as with grace and narrative elegance, she creates characters and episodes that force us to think about the brutality with which we, as humans, relate to the world around us. The same brutality that is displayed in encounters with animals in the wild comes back to haunt the parts of the novel that occur in the city, presenting a continuum of violence that will surely turn upon itself, like a serpent that holds its tail in its mouth.

What I will remember most about this novel is the colours: Padel’s remarkable eye for detail is never sharper than when she uses coloured images, whether it is to describe the markings on a king cobra’s hood in a dimly-lit tropical jungle or a beam of sunlight slipping through a window onto a cold kitchen floor. It is the minutiae, these moments of seeming nothingness, of narrative pause almost, that give Where the Serpent Lives its robust character and delicate texture. The carefully-crafted plot, the sympathetically-drawn characters and pace will keep you riveted, but it is the images that will play upon your mind’s eye long after you have closed the covers of the book.