This delightfully written book is a user’s manual on technology and governance. A dash of realism would have made it indispensable 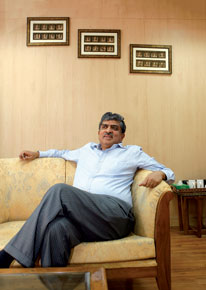 This is a delightful book. But let me digress. The year was 2000 and I received a call from Justice MN Venkatachaliah, who then headed the National Commission to Review the Working of the Constitution. He was interested in barriers to inter-state movement of goods and asked if I would write a paper on this, focusing especially on road transport. One of the chapters in Nandan Nilekani and Viral Shah’s book, Rebooting India: Realizing a Billion Aspirations is titled ‘Frictionless Highways for Economic Growth’. Let me quote from this. ‘Today, vehicles have to stop at state borders to hand over their manifests and undergo inspection, which wastes time and lowers transport efficiency…. With the ability to identify and track vehicles through an online system, the electronic toll platform could be used to create digital manifests for goods transport… Every time a vehicle is dispatched, the company would create a manifest of the goods being carried, especially relevant in interstate transport where there are restrictions on the goods that can be moved across state borders.’ This is identical to the idea that excited Justice Venkatachaliah in 2000. With a colleague, I wrote that paper for him. In the course of writing that paper, I discovered a few things that I hadn’t anticipated or known.

First, inter-state barriers aren’t always because of fiscal reasons. Nor will the proposed Goods and Services Tax (GST) and abolition of entry tax or its equivalent alone solve the problem. There are barriers connected with forest and environmental checks. Second, there are hindrances associated with the Motor Vehicles Act, 1988, and this isn’t a simple matter of granting or not granting national permits. State governments formulate their own rules and there are instances of what’s applicable varying by trailer length from one state to another. Imagine what this does to trucks moving from one state to another. Third, India’s economy is still largely informal and unorganised. Nandan Nilekani and Viral Shah write that the informal sector generates 90 per cent of all employment in the country and 75 per cent of all Indian businesses are unlisted (page 51). Quibbling about definitions of informal/unorganised is not the point. The point is that the idea about a manifest being dispatched ahead of the truck works if it is a ‘company’. It works if there is an efficient method of aggregating consignments into entire truck-loads in place of the present piecemeal way of doing things. It works if there are large fleet operators. The present Motor Transport Workers Act, 1961, encourages fragmentation of ownership and discourages fleets of large sizes. Recently, at the NITI Aayog, I went through a presentation that rehashed the arguments mentioned in Nilekani and Shah’s book and I asked them if they were unaware of the three systemic constraints I have just mentioned. They responded that they were aware of these problems, but were pushing for a pilot project to demonstrate the success and replicability of the idea. The way I see it, it’s possible to push this idea for not more than perhaps 5 per cent of all commercial vehicles.

I have no quarrels with this book. As I have said, it is delightfully written. Indeed, I feet Rebooting India is better written than Imagining India (2009). Across its 16 chapters, it roots for the use of technology in government payments and subsidies, for e-know-your-customer (KYC) systems, GST, highways, government expenditure, elections, education, health, power, innovation and justice delivery. Technology does have a role and infotech can be used innovatively and much better than it is today for government-to-business (G2B), government-to-customer (G2C) and even G2G transactions. I can cite all kinds of figures on mobile phone penetration and the use of smart phones. But there are systemic constraints that need resolution. Technology is only a tool. It isn’t an end in itself. Nilekani and Shah know this perfectly well and don’t suggest otherwise. However, the book’s chapter on frictionless highways makes no mention of the constraints, and therein lies the problem.

In similar vein, consider the chapter on ‘Integrating Our Economy with the Goods and Services Tax’. Incidentally, this has a factual error. ‘It’s not that tax rates in India are particularly high—data from the World Bank pegged India’s tax collection (as a percentage of GDP) at 10.8 per cent in 2012, compared to 10.2 per cent for the United States, and nearly 25 per cent for the UK and France’ (page 129). That World Bank figure is only for Union Government taxes, direct and indirect. With state-level taxes included (there is no satisfactory data on local body taxes), the tax-to-GDP ratio is more like 18 per cent, fluctuating a bit from year to year.

In the context of a Goods and Services Tax Network (GSTN), this is the book on GST: ‘The problem is that there are too many different types and rates of tax. Operating across various levels of government, such a multilayered taxation system leaves plenty of room for grey areas to arise. These uncertainties have to be resolved by the tax authorities, and as with any complex system that relies upon human judgement, a uniform implementation of the law is virtually impossible. Arbitrating tax disputes is also a waste of precious time and resources. It becomes harder to enforce compliance with the law, and a large bureaucratic machinery has sprung up to police taxpayers…. Ultimately, the GST goes far beyond streamlining India’s taxation network. It is in fact a project in nation-building, with the potential to radically transform the Indian market, the Indian economy, and 1.2 billion lives.’ As in other areas, this is a bit over the top and overstates the case for GST and GSTN. I have no problems with the terminal goal of a simplified tax structure, but the GST alone is not all that it’s cracked up to be. First, it does not eliminate all other indirect taxes. What we will have, whenever we have it, will still fall short of an ideal GST. Second, not all products will be under its ambit. Third, even when products are under it, all of them won’t necessarily have the standard GST rate. (There is speculation that a revenue-neutral standard rate for the tax will be around 18 per cent.) Fourth, complications in the taxation regime are also because of exemptions. Every year, the Union Budget papers now have a ‘revenue foregone’ statement documenting these. They also account for most of the ‘grey areas’ and ‘uncertainties’ that arise. In the Budget speech for 2015-16, it was announced that exemptions would be phased out and suggestions have been invited on this for next year’s Budget. So long as this is not done, compliance costs cannot be significantly reduced. In the entire chapter on GST in this book, I found no mention of tax exemptions. That’s the reason I said the case for GST is overstated.

Moving on, consider the chapter on ‘Streamlining Government Spending’. For a chapter like this, I would have expected some reference to reports of the Second Administrative Reforms Commission set up in 2005. There is no such reference, and it is as if Nilekani and Shah don’t know that this Commission or its reports exist. ‘Within different levels of government, officers can allocate funds but do not know how these are spent. This lack of information prompts risk aversion to kick in so that more rules spring up to safeguard the usage of government money.’ For any public servant, risk aversion fundamentally results from the definition of ‘criminal misconduct’ in Section 13(1)(d)(iii) of the Prevention of Corruption Act, 1988, not from lack of information. There is no reference to or awareness of this Act in the book, nor to the 2013 and 2015 amendment bills. In arguing for an Expenditure Information Network (EIN), there is also a dose of unrealism. ‘The details of every programme will be captured on this platform, starting with the programme definition…. the processes by which the Centre disburses funds to the states—from obtaining a grant under the budget to finally utilizing funds for various purposes— continue to remain cumbersome, opaque and riddled with delays, thanks to the hierarchical structure of fund flows and the lack of computerization.’ The idea seems to be that the Planning Commission, or its counterpart, will have a proper Management Information System in place. However, elsewhere, ‘Under the latest budget and the recommendations of the fourteenth Finance Commission, the centre will share 42 per cent of its revenue with the states, as opposed to 32 per cent in 2014-15. So, a significantly larger chunk of funds will now be provided by the centre to the states as untied funds’ (page 288). Indeed, intra-state devolution down to local bodies is also needed, with mandatory recommendations by state-level Finance Commissions. While that EIN idea is a good one, there seems to be a misplaced emphasis on something like a mainframe computer sitting somewhere in Delhi. Instead, there will be tablets and laptops in districts, blocks and villages, if that is the imagery to use. Indeed, I was surprised to find not a single mention of local bodies such as panchayats and municipalities in the book.

I am actually a bit surprised. At the time he wrote Imagining India, Nilekani had no experience of governance. But that isn’t true now. Why isn’t there a greater appreciation of government policy-making, government policies and administrative processes in Rebooting India? For a book that aims to have a country rebooted and a billion aspirations realised, that should be essential. Don’t get me wrong. This is a wonderful book and there is nothing wrong with its terminal goals. There is nothing wrong with what is said about Aadhaar and its benefits, or about banking. Indeed, the new IDFC Bank is rolling out the micro-ATMs the authors talk about. I recently went on a trip to a remote part of Uttarakhand, with two villages that were about 20 km from the nearest town that had an ATM. There were around 400 households in these two villages. Contrary to my expectations, all of them possessed bank accounts. With an ATM 20 km away, I wondered how they used their bank accounts. The unexpected answer is simple enough. Every morning, there is a bus (privately operated, not public) that passes those villages, headed for the town, and it returns in the evening. In the morning, the bus-driver collects ATM debit cards, PIN numbers and details of amounts to be withdrawn from these individuals and gives them the cash in the evening. Complete trust and no instance of malfeasance. This is the kind of disintermediation markets throw up, and there are better ways of solving the problem.

A secondary question bothered me. Who did the authors show the manuscript to? The acknowledgement only mentions Samar Halarnkar. While he is someone I know and respect, I wonder whether the manuscript was shown to someone who has worked, or still works, in government. I suspect not. Had that been done, the authors might have appreciated some of the obstacles (not all is obstinacy) that stand in the way of implementing the wonderful ideas they have come up with. In my view, the outcome would have been a more realistic book. This is not meant to take anything away from the present book, which written and illustrated engagingly. My apprehension is that in the absence of an explicit flagging and discussion of systemic constraints, little rebooting will result. It will still be in the realm of imagining India and that is a pity.

(Bibek Debroy is a member of the NITI Aayog, an economist and the author of many books)