This year’s Booker winner and last year’s winner of the Prix Goncourt have arrived simultaneously at Indian bookstores. Here are some good reasons to pick one over the other 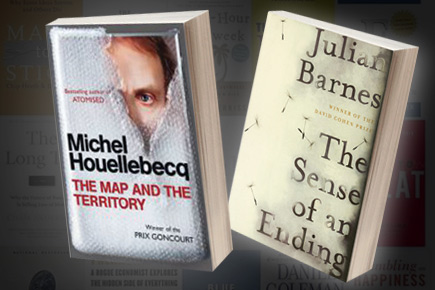 This year’s Booker winner and last year’s winner of the Prix Goncourt have arrived simultaneously at Indian bookstores. Here are some good reasons to pick one over the other


Is there any real reason to club these two books together? One possible reason, for whatever it is worth, is that each has been awarded the leading literary prize in its respective country. Julian Barnes’ book, as we well know, won the Booker this year, and Michel Houellebecq’s book won the Prix Goncourt last year. But where we happen to be, on the margins of the Anglo-American literary world (even if, as a market, we are becoming more than marginal), the books arrived in our bookstores at much the same time and may as well have been published simultaneously.

Really, though, it is illustrative to look at the two books to see what they reveal about the choices that decide what we end up reading here. The Booker, for much of the Commonwealth, remains the prize that commands attention. Like the Miss Universe title, the involvement of a few Indians, two of whom have stepped in and out of India—Salman Rushdie and Aravind Adiga—and one who lives in the Bharat that begins at Jor Bagh—Arundhati Roy, has ensured the Booker gets ample coverage in India. The Prix Goncourt barely gets a mention—the prize winner for this year was announced more than six months ago and I doubt if most readers would even be able to hazard a guess.

Barnes’ book is a good indication of the state of English fiction in the Commonwealth, give or take a Coetzee. Certainly, it speaks badly of the rest of the books on the Booker shortlist. Barnes has written better books, and reading this book, I was left with the feeling that he has, perhaps, in part written this book earlier. Two men who were friends and a woman who was loved first by one and then the other—that is the premise of at least a few other books in Barnes’ oeuvre, most notably Talking It Over and Love, Etc. The repetition of the premise reminds me of the ending to Experiment, a wonderful Barnes short story: ‘Apparently if you take a magnum and decant it into two separate bottles and put them into a blind tasting, then it’s extremely rare for even wily drinkers to guess that the wine in those two particular bottles is in fact the same one.’

The decanted wine here consists of two men who were friends in their youth. One takes his own life and the other, late in life, tests the ‘fragility and self-deception of memory’. It is no more than an extended short story, too tightly plotted to allow anyone other than the narrator any pretence of depth. Far too resonantly, we are made aware that ‘history is that certainty produced at the point where the imperfections of memory meet the inadequacies of documentation’. It is a comforting little novella, leaving us with the easy sense of having understood something significant about how we remember the past.

The barrenness of fiction that the Booker exhibits is a comment that extends to our shores. When boasts are made of the increasingly vibrant literary culture in India—and the Jaipur festival is often cited in this context—they fail to address the mediocrity of our fiction over the past decade. We certainly have no shortage of writers, but we have very little good writing. Could it be that prizes and festivals are creating a culture that celebrates literary celebrityhood, but allows little time for the practice of a difficult craft?

Houellebecq is the negation of any such simple claim, but he may well be the exception. He is a literary celebrity, and a provocateur, a term he qualifies: ‘It isn’t exactly true that I’m a provocateur. A real provocateur is someone who says things he doesn’t think, just to shock. I try to say what I think. And when I sense that what I think is going to cause displeasure, I rush to say it with real enthusiasm.’

This is what has given him his notoriety. It is a notoriety that has ensured his books have reached a wider audience in the Anglo-American world, but it also means that each time his books are mentioned, they come with the additional information that this is an author who has some unpleasant things to say about Islam, is a misogynist (he is also termed a misanthrope but that is not an offence against political correctness), and has written some lurid sex scenes.

This more or less also ensures that our literary culture will ignore him. The majority of people who read The Guardian or The New York Times, which will mediate how Houllebecq is read here (if he is read at all), are also exemplars of liberal correctness. Unfortunately, they want their literature to display the same correctness, to subscribe to the comfort of complicity that Barnes’ book offers them.

For this very reason, The Map and the Territory may be the Houellebecq book that will find readers here. Unlike Platform or Atomised, it does not shock so visibly. As the title suggests, it is a book that plays with the idea of representation. Set a few years in the future, when the French countryside is being bought over by the Chinese, it has already proved to be prescient about the European economic crisis.

The main character, Jed Martin, has begun his artistic career by photographing Michelin maps of the countryside. He has since moved on to painting. For seven years, he worked on the ‘Series of Simple Professions’, beginning with a horse butcher, before spending another decade on the ‘Series of Business Compositions’, which details conversations and encounters such as Bill Gates and Steve Jobs Discussing the Future of Information Technology. Ready to exhibit his work, he approaches the author Michel Houellebecq to write a catalogue for the show. The fictional Houellebecq is not the central character, but he is no less memorable than the fictional Coetzee or Pamuk.

From the decapitation of Houllebecq to Martin’s final 30 years of silence, the novel traces a course that puts paid to the post-modern conceit such a storyline may suggest. Both Martin’s long silence as an artist and the mention of a museum in Philadelphia to house his later works are a clear nod to Marcel Duchamp, whose enigmatic spirit haunts this book.

Unlike most Anglo-American novelists, Houellebecq is not frightened of ideas, but the ideas do not weigh down the narrative. For this very reason, any limited representation of the novel will remain untrue to its appeal. The truth, tongue well in cheek, is more ably stated by Martin’s father when he hears Houellebecq may write the catalogue for his son’s exhibition: ‘He is pleasant to read, and he has quite an accurate view of society.’