Hiren Bhattacharyya, the Assamese poet who recently passed away, was a rare writer whose works are taught from high school to university 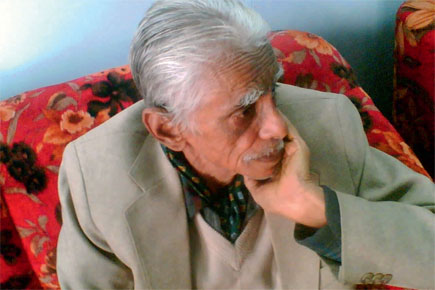 Hiren Bhattacharyya, the Assamese poet who recently passed away, was a rare writer whose works are taught from high school to university


When the agriculture minister of Assam Nilomoni Sen Deka calls Hiren Bhattacharyya the modern-day Kalidasa in his tribute, he has a point. Thousands of poetry-loving Assamese people join him in unison. Like the great Sanskrit poet, Bhattacharyya too talked about nature, particularly the rain and paddyfields of his homeland. Little wonder then that the word shosyoghran (smell of the harvest) was added to the Assamese dictionary—both linguistic and psychological—by this Bohemian, frail-looking, shabbily-clad poet (and he justifies it thus: ‘You know very well/This poet has nothing else/Just a lone shirt/And that too parting at the seams/Love must be like this/Baring covers too soothe the heart’). His short poems with typically long sentences made readers eagerly wait for Prantik, the fortnightly literary magazine he wrote for and co-edited for 30 years.

When he died on 4 July, after 20 days in the intensive care unit of a private hospital in Guwahati fighting lung and urinary infections, it was the third major setback for aficionados of Assamese art in just about half a year: music doyenne Bhupen Hazarika passed away 5 November 2011, and litterateur Indira Goswami died 29 November 2011. Assamese literature and culture has never felt a void so big. Probably because no able successor to any of these luminaries is in sight, say readers and critics.

Kapil Thakur, the father of Zubeen Garg who set to music and sang many songs penned by Hiruda, as he was known, possibly remembered this poem when he told The Times of India after the poet’s death, “…he was a farmer of words”. “He was a matir manuh,” says Dhiman Barman, a young poet published regularly in Prantik, who grew up under the masterly guidance of Nilamani Phukan and Hiruda himself. Dhiman’s tribute can be understood in two ways. While ‘matir manuh’ as a phrase means an honest, harmless man, ‘mati’ means earth. So Hiruda was a matir manuh in more ways than one.

With Navakanta Barua, Ajit Barua and Nilamani Phukan, Hiruda, as he was affectionately known, formed the quartet who shaped modern Assamese poetry. That he stays clear of any influence of English Modernist poets, unlike many writing alongside him, is what critics in Assam value most. Originality is innovation for Hiruda, clearly the most lionised of the four. This is because the common man could connect with his poetry. His were not poems loaded with images and medievalism; instead they were about how the earth smells after the first spell of rain, how the mud stinks on the eve of the sowing of seeds. His words themselves carried the redolence of earth, their address invariably was pothar, pothar and pothar (fields).

Hiruda was invited to remote villages in Assam on occasions like Rabha Divas, Shilpi Divas and Sahitya Sabha to commemorate the state’s litterateurs, something unheard of for a poet. “I was five or six, he was invited to our village on the occasion of Rabha Divas. He stayed in our house, took me in his lap and taught me a children’s rhyme that goes, Rahmate kam kore Najirat/ek toka chari ana hazitat (Rahmat works in Najira/for a salary of one rupee four annas),” recalls Archana Deka of Jawaharlal Nehru University, who is originally from a remote village in Barpeta district that was swept away in the recent flood.

Great books are always contemporary, wrote the children’s writer Rhoda Power. So are great authors. Hiren Bhattacharyya is the only poet prescribed in the Assamese literature syllabus from high school to university. He has written two volumes of verse for children—Lora Dhemali and Akou Dhemali. His poem Mor Desh, a manifesto of patriotism, is easily the most recited poem in Assamese cultural programmes and competitions. His words are simple; you never need to look them up in the dictionary, yet you feel that he has the best vocabulary. Herein lies the secret of his genius and mass appeal. This spontaneity of his poetry is visible in a reply he gave to someone who asked him why his poetry had become infrequent: “Kobita ohai naison, ahile likhim (Poetry has not arrived… when it reaches, I shall write).”

Also, he is easily the most-quoted Assamese writer. But his most-quoted lines are on death—‘After all, death is also a crafting/An unappetising sculpture chiselled out of life’s granite.’ Hiruda exercised the artist’s freedom of defining his subject. So is his art a form of hostility towards death?

Translations from Assamese are by DN Bezboruah