Chicklit in India is all bright covers and imported accessories, barring some notable exceptions 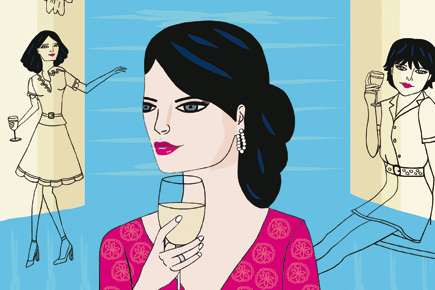 Chicklit in India is all bright covers and imported accessories, barring some notable exceptions


Okay, so let’s break this down for a moment. ‘Chick’ as in  a young woman (one presumes an older woman would graduate to being a ‘hen’) and ‘lit’ as in short-for-literature. Young women’s literature. What’s not to love?

You see it everywhere these days, this particularly ubiquitous genre. The covers scream at you from bookshelves, pink and purple and baby blue. Colours, presumably, the same young woman this is aimed at also decorates her bedroom with. Complete with stuffed animals on her chenille bedspread. Looking closer, you see silhouettes of ‘sexy’ girls, none with an ounce of extra fat, holding martinis, dangling shoes, clutching their handbags. That’s what we do, girls, wink the covers, suggestively—we drink. We sit on bar stools with our impractical heels. We spend the sum national product of a small country on our handbags. And this is a book that is all about you.

An aside: publishers, seriously, what is with these covers? I mean, is having a girl’s legs complete with red shoes some kind of time-tested marketing gimmick that makes women between the ages of 19 and 35 automatically reach for their wallets? Isn’t everyone sort of sick of the shoe, the handbag, the illustration of a girl swishing her straight hair? Are these the only things that you feel represent us? I’d like to, for once, see a woman with crazy hair, kind of like mine, dressed in somewhat unflattering clothes, like I sometimes do, drinking an Old Monk and Coke and wearing a jhola. Really, I would.

Here’s a confession I have to make before you go any further. I write this kind of stuff. Not completely, my heroine has never held a designer bag in her life, and her man isn’t the one of her dreams, not at all, but, for lack of anything else to call it, it’s been merrily labelled ‘chick lit’ and put in that section of the book store. Me? I prefer to call it ‘commercial fiction’, but when I tell people that, they get this pitying ‘po-tay-to, po-tah-to’ expression on their faces, and I know I’ve been dismissed. Not that there’s anything wrong with it, of course. Everyone needs a little escapism in their lives, and if chick-lit authors are providing that, then what’s the harm? It’s just that (and this is the last time I’ll mention it, so bear with me) I don’t write it.

Recently, India’s publishing business has experienced the sort of boom that any emerging market would have wet dreams about. Books, books, books. Everyone’s writing them; maybe not quite so many people are reading them, but I guarantee you, the next time you’re at one of these arty dos, and you spit (but please don’t, not in public) you’ll hit one of the following: a writer, a wannabe writer, or someone in the publishing industry. The fantastic thing is that it keeps people like me in new shoes (kidding! I only buy cat food), but the not-so-fantastic is that there is a sudden mushrooming of genres people have very little experience with in the Indian market, genres such as chick lit.

Here’s what you can expect to find in an Indian chick lit novel: one overbearing but wise older woman, probably the grandmother, but also sometimes an aunt or your friend’s mother; one overbearing and utterly annoying older woman, who is usually the mum, but can also be the aunt who wants you to get married Asap; one ‘traditional’ friend, who is shocking you by her subversive return to her roots, by either 1) agreeing to have the arranged marriage you’re bucking or b) some other sort of bottled Indian traditionalism that is falling by the wayside because of our modern day attitude; one ‘rebellious’ friend who keeps you worried by her 1) drug use 2) promiscuous sex habit 3) endless chain smoking; and finally, one man who is either dishy/dreamy/reserved-but-sexy who knows you and your habit of eating chocolate eclairs/macaroons/gulab jamuns.  He finds all your annoying little habits charming, and is by far much more eligible than any man the annoying aunty has been dangling before your nose.

It all started, as far as I can tell, with Advaita Kala’s Almost Single. Thousands of books later, it continues to sell well, and was a pioneer in itself for talking about the 30-something single Indian woman, stuck between a very traditional world and a very modern lifestyle. Kala’s heroine drank Sula, toilet-papered a car, but also went to the local astrologer and wanted very much to get married. It was the first time someone had talked about the juxtaposition of tradition and modernity in a commercial novel in India, and so it’s not surprising that a mere year after it was released, a bunch of me-too books were published too.

Take the other doyenne of Indian chick lit too, Anuja Chauhan. She managed to combine stuff Indians like best (okay, I’m generalising, let’s say most Indians) such as cricket (Zoya Factor) and politics (Battle For Bittora) and put them within the context of a young, pretty girl, looking for  validation and stumbling inadvertently across love.  Her characters are lovable and funny, and they manage to retain the essential Indian-ness that sets them apart from their peers in New York or London.  I read her second title, and my friends will attest to the fact that I am the least political person they know, and yet, I loved it. It made politics accessible and wrapped it all up in one very sweet romantic storyline. Simplified? Sure, but your intellectual heavyweights aren’t going to be picking it up anyway, unless they want some light relief.

Now, we come to the problem. While some people are doing it very well, it seems that other people are not managing to do such a good job. Just in perusing books for this story, I came across one where a young woman, with a passion for the unearthly, manages to get the universe to send her a young, sexy half vampire-half werewolf dude who is always coming to her rescue and rolling his eyes at her a lot. Others think that just by inserting their desi food of choice—aloo parathas, curd rice—somehow the story will automatically be ‘Indian’, even if the characters are doing nothing that remotely suggests so. Okay, so you don’t have to put in a sari or grandmother’s mango pickle scene. We’re a modern country, for some part, and our literature should also reflect the modern. But it feels like these writers are just talking about the lives they’d like to lead: fancy clothes on a small salary, handsome men just dying to take them to the hottest restaurants, and not talking about any context whatsoever.

So, before the next slew of perky covered books comes out (now in your favourite colour!), I hope that someone, somewhere in this great vast country is writing about women like you and me. Truly.