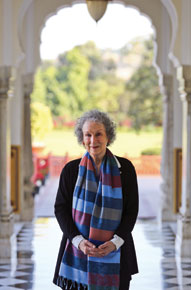 Margaret Atwood is a person obsessed with time. From Jaipur to Delhi—from keynote address to panel discussions to conversations—it becomes amply clear that time, both personal and global, are of particular interest to her. As a 76-year-old author, she refers to herself as “thousands of years old”. At the opening of the Jaipur Literature Festival, she said, “To have been invited to give the keynote here, I must be either very important or very old, and I suspect it is the latter.” In her conversation with Patrick French at the India Habitat Centre, Delhi, she spelled out the advantages of being either a young newcomer, or a wizened elder writer, and added that the worst time in a novelist’s life is in the middle.

If she stretches out her seven-and-a-half decades into thousands of years, most of her novels similarly tell of a time in the future. In her latest The Heart Goes Last (Bloomsbury, 320 pages, Rs 499) she writes of the couple Charmaine and Stan—once successful professionals in the US who are now underemployed, unwashed, unfed and living in a car. Capitalism has keeled over, and in order to survive they do what they must do—join a social experiment called Positron. Here they spend a month as inmates in jail and another as staff. Every month another couple, called their ‘alternates’ swaps places with them, taking up home at Consilience only to become inmates at Positron Prison a month later. This set-up naturally leads to plot and subplot of intrigue, deception, savagery and ruthlessness.

Author of over 40 volumes of work, Atwood has always been anchored by dystopias. For her these aren’t far-out worlds. As she told author and game designer Naomi Alderman, “Utopias and dystopias are both blueprints.” The 19th century, she elaborated, witnessed a huge spate of utopias. The US was set up as a utopian experiment after all. As a pioneer of the dystopic novel, Atwood’s prescience has often proved uncanny.

It is this ability to see into the future that makes her such a staunch conservationist. She knows that the actions of today will determine the resources of tomorrow. If we kill the blue-green algae of the oceans that makes 60-80 per cent of the oxygen we breathe, she says, our species and the planet are doomed. While she is happy to talk about her books, she is happier still to talk about these other interests. And birds. Especially birds. Atwood and her partner Graeme Gibson are joint honorary presidents of the BirdLife Rare Bird Club. As BirdLife International is ‘the world’s largest nature conservation partnership,’ Atwood can reel off story after story about birds across the world. In India diclofenac killed 90 per cent of the vulture population; no vultures mean more rats, more dogs, more rabies. In Africa, the root causes differ but the vultures are endangered there too. People kill the birds of prey to make voodoo objects out of them. Also poachers are betrayed by vultures circling the slaughtered animals, so they poison animal carcasses, which kills vultures and other animals.

Atwood’s interest in the outdoors rose in childhood itself. She spent her early years in northern Quebec as her father researched forest entomology. Growing up, her only forms of entertainment within the house were reading, writing and drawing. She read everything from lurid mysteries to Edgar Allan Poe. Her brother and she had a game where one person would tell a story and the next person would continue it. The creative process was a collaborative one from the start. When she was outdoors, she spent hours overturning logs to witness the kingdom of beings that thrived below. Having lived in close proximity to nature, it is little surprise then that storytelling and nature became the pillars of her world.

Always up for a new challenge, and as a ‘child of the comic book generation,’ her new book will be her first graphic novel. Called Angel Catbird, the superhero has the tail and whiskers of a cat, but the ears and wings of an owl. The book aims to increase bird-cat awareness as cats (domestic and wild) are one of the top killers of migratory birds. Angel Catbird is going through a bit of an identity crisis. It looks at birds and wonders, ‘Should I eat it?’ or ‘Should I save it?’

But how can you stop cats from killing birds? I ask. “It is very simple,” she says. “There are several things you can do. One: as a city-cat owner keep your cat inside, for the safety of the cat and birds. Cats that have run away in cities have only five per cent chance of ever returning. They get hit by cars, they get predated by animals like raccoons, foxes and coyotes. They fight with other cats, get diseases and parasites. Two: birds see colour. Cats tend to be camouflaged. But if you put a coloured collar on them, birds can see them and that cuts down, by about half, birds predated by cats.”

For Atwood, nature and conservation aren’t externalities to be experienced only with boots laced up and under a tent. Rather, it is everywhere and could be as basic as putting a red collar on your kitty.

“Bird watching is much more widespread a pursuit than golf or any of those things,” she adds, “If you start with not a lot of ambition, you can do it from a chair in your backyard.” Atwood sees the world not in terms of disjointed entities but rather as an interconnected web, where, for example, ocean birds help fishermen. She explains this cycle: bird poop nourishes the plankton in the seas, which the small fish then feed upon, who are in turn preyed upon by the larger fish. Quite simply, more ocean birds mean more fish for the fishermen. Through her decades of writing, it is these interrelations that she has sought to explore.

Her role as a feminist, her landmark books over the decades, her ability to be elderly yet contemporary, her sharp one-liners and deadpan wit ensure that Atwood gets a rockstar reception wherever she goes. To say her talks in Jaipur and Delhi were fully packed would be an understatement. Readers queued up two hours in advance to get a seat. Others waited in line for just as long to get her signature on a book. Few authors command a similar following.

A hundred years from now a new generation of diehard fans might be born, as Atwood is part of the Future Library Project. She has submitted the manuscript of Scribbler Moon to a library in Oslo, Norway, which will not be read for a century. Since she cannot divulge any details from the text, I ask this master of speculative fiction, what will readers a hundred years hence find most unusual about our time? “That is a very optimistic question,” she says. “Assuming there are going to be people, assuming that they will still be reading, assuming that there will be a library in Norway, assuming that the forest will grow for that paper. If all those things come true and there are readers… probably what they will find peculiar about our age is that it took us so long to figure out that if we kill the oceans we will be dead. Why did it take so long?”

But if you weren’t an optimist, you wouldn’t be doing this, I persist. “Why not?” she says, with the gentlest of smiles. “You might as well vote for the positive and hope that other people will do the same. Look at how people behaved in the Black Death.” She lists the various behaviours: people fled; secluded themselves; looted, raped; civil order broke down and finally there were those who recorded the event. “It is due to them we know what happened. They are the ones to whom we are most grateful,” she says.

For all time, it is to Atwood, chronicler of this time and foreseer of the future, to whom readers are thankful.