In Updike’s final collection of stories, published posthumously, death is a constant presence and it seems to have played an active role in his imagination 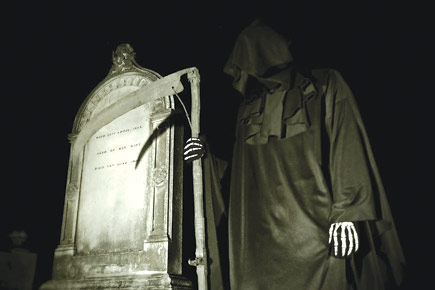 In Updike’s final collection of stories, published posthumously, death is a constant presence


In his review of Rabbit is Rich which appeared in the Observer in 1982, Martin Amis wrote, ‘If Rabbit has a central theme…it has to do with the one-directional nature of life: life, always heading towards death.’ Death haunts the pages of Updike’s last book too. In a story called ‘Varieties of Religious Experience’, Updike says, ‘Human consciousness had curious properties. However big things were, it could encompass them, as if it were even bigger.’ Updike’s own fiction, while always aware of the limitations of art, consistently tries to engage and encompass death. His ploy is to get Mysterious Towering Death to the negotiation table, sit it down with a hot cup of coffee, then get it to spill the beans.

Many of these stories are set in bedrooms; the bedroom, after all, being that space in the house where new lives are conceived and old ones breathe their last. In ‘The Apparition’, a man in his seventies lusts after a younger woman he has met on a sight-seeing tour: ‘When…Milford lay in bed face down with his sleeping wife, he seemed again to be confronting Loren body to body… He rejoiced to be tasting lust’s folly once more, though the dark shape he was lying upon, fitted to him exactly, was that of his body in its grave.’
Updike brings the fierce though ‘reluctant wisdom of age’ to bear on the nature of human relationships and the cycle of life. In ‘Blue Light’, Fritz despises the insecurities of a wife heavily dependent on him: ‘Corrine brought out his protective instinct. But then her streak of panic… excited his capacity for impatience and, in the end, cruelty. He had grown stony under her siege…’. In his heart, though, Fritz feels married to all his three wives, ‘…the marriages continued underground, through tunnels of fondness and mutual understanding.’ In ‘My Father’s Tears’, the brilliant title story, a son leaving for university waves out to his schoolmaster father from his train compartment, ‘My life had come out of his, and now I was stealing away with it.’

Updike’s writing is encyclopaedic—the minutest changes in a familiar Pennsylvania landscape are lovingly, dispassionately, documented. His similes jab like needles, reveal the world in blinding flashes: ‘…the air had thickened, pressing like pillows in his face’; a husband lies next to his cancer-stricken wife feeling her disease ‘growing like a child of theirs’; the glossy pages of Hustler remind a character of ‘a rose-grower’s catalogue, so many shades of pink and red.’ At times though, Updike’s writing displays an irritating aphoristic tendency, ‘Once a parent, always a parent’ or ‘Our bodies are a residue the spirit leaves behind.’

Updike always returns to his central question: ‘What does it mean: the enormity of having been children and now being old, living next to death?’ At the end of our lives, we know little about our own selves, ‘Approaching eighty, I sometimes see myself from a little distance, as a man I know but not intimately.’

The writer’s debut collection of stories, Eunuch Park, has recently been published by Penguin