A compelling love song for the author’s adoptive home, a city of multiple paradoxes 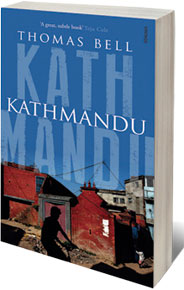 A compelling love song for the author’s adoptive home, a city of multiple paradoxes

Many great love affairs have humdrum beginnings. This one began in a kitchen in Kew. The author, a Briton working as a call centre operator to pay off his student loan, wanted to be a foreign correspondent. The trouble was he didn’t know which country he would like to correspond from.

Then someone in a suburban kitchen suggested Nepal. Thomas Bell writes: ‘It seemed a good idea. There were Maoist rebels, getting in the news with growing frequency. Earlier that year the crown prince had massacred the royal family, proving what a big story Nepal could be if something crazy happens. Crazy things seemed to be the Nepali style.’

That was how what seems to be a life-long love affair began between the then 23-year-old Bell and the city of Kathmandu, the capital of Nepal, where the author did a five-year stint as a foreign correspondent, and where he currently lives with his Nepali wife and his two children.

All cities worth the name are in search of lovers who will write about their ensnarement. What was then called Calcutta found a lover in Geoffrey Moorhouse, who wrote one of the best books on that city of ‘strange and sublime address’ that I have read. Delhi has had many lovers, including Khushwant Singh and William Dalrymple, and the erstwhile Bombay has had its Nissim Ezekiel and Rohinton Mistry.

Like a promiscuous courtesan, Kathmandu has had many lovers who have written about it, in tones of wonder, rapture, rage, grief, and finally a bemused resignation, acknowledging an elusiveness of their subject, which the subtlest web of words can’t hope to entrap. Notable among Kathmandu’s many lovers was my former boss, journalist, artist and editor Desmond Doig, who lived there for many years, weaving himself into the city’s paradoxical narrative of ageless myth and manic modernity.

With a frieze of snow peaks veiled with smog as a backdrop, in the city’s streets centuries jostle for space along with the bumper-to-bumper cars. In a gloom of gullies interspersed with the sudden sunlight of squares, bulls of midnight black slouch like temple statues brought to life. Beside the grimace of a glass-fronted shopping mall, decaying before it has finished being built, is an age-old shrine in which a pre-pubescent Living Goddess plays with a pink plastic helicopter made in China.

What’s real, what’s unreal? In Kathmandu, it’s difficult, maybe impossible, to tell. As Bell writes: ‘Thousands of years ago, in legend and in reality, the Kathmandu Valley was a lake, coursing with serpents… a Buddha came and sowed a lotus seed in the ancient lake. From the flower a beam of light appeared… the self-created god Swayambhu… Another enlightened one, called Manjusri used his sword… to drain the lake… (and) brought people to the Valley.’

Legend and history merge, with no discernible dividing line. ‘Until 1951 foreigners were mostly excluded from the country, which was ruled as a kind of feudal theocracy. The first motorable road to Kathmandu was completed in 1956… Television arrived in 1985… Five years later the absolute monarchy yielded to parliamentary democracy, under pressure from massive street protests.’

The result of ‘this shrinking time lag’ writes Bell: ‘is a city that feels at once abandoned by the modern world and buffeted by it. The failed introduction of democracy, the failure of foreign aid, the crisis of social values, the environmental catastrophe… probably no other city was woken so rudely from medieval sleep, to find itself exposed in the electric light of the later twentieth century.’

Impressively researched, with a bibliography running to 17 pages, the book is saved from pedantry by the author’s brisk, journalistic style which uses the immediacy of personalised vignettes to bring to life the complex, often contradictory, human kaleidoscope of Kathmandu.

In two short paragraphs Bell captures the tragi-comedy of the Maoist misadventure: ‘Comrade Prabin was a teenage kid… He told me ‘The Maoist soldiers came to my village… I felt courageous and I joined’… After fifteen days with the Maoists he deserted them and went to his brother, who was a member of the Armed Police… (and) sent him away to try for army recruitment… but he fought with his parents again, ran away a second time and rejoined the rebels… Then he started crying. ‘If I go home my parents would just bother me and I would come away again.’ Since he was a child he had wanted to be a soldier.’

In a scenario that could have been jointly scripted by Kafka and Joseph Heller, Bell explores Kathmandu’s many paradoxes, as labyrinthine as its unnumbered alleyways: how political impasse has become the only guarantee of political stability; how foreign aid which enriches only middlemen is the country’s biggest revenue earner; how a spew of construction has spread like concrete vomit over vanished paddy fields despite the looming threat of a long- impending earthquake which will reduce it all to rubble.

So why make the Valley of a doom foretold your adoptive home? That’s a secret between the city and her neither naive nor sentimental lover.

(Jug Suraiya is a writer and columnist)