Nine Lives is proof that Dalrymple knows this country better than most Indians, but it also displays a creeping complacency in writing about it. 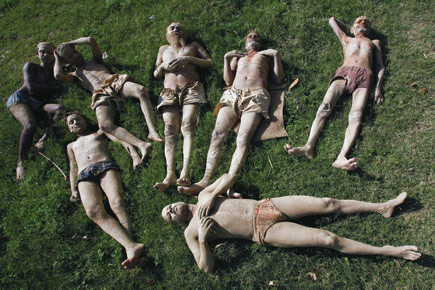 Nine Lives is proof that Dalrymple knows this country better than most Indians, but it also displays a creeping complacency in writing about it.

Dalrymple writes of the ‘almost unearthly fertility’ of the Sindh floodplains; 70 pages earlier, the same phrase describes the soil of Kerala. He underlines this impression with ‘fecund’—in both cases. Then there are the ‘cane breaks’ of Sindh that appeared in Karnataka 54 pages before; both should correctly be ‘canebrakes’. There are several more errors. I mean, a ‘clug’ of paan? A chariot that began to ‘creek’ up the street? Someone was ‘originally born’ somewhere? An India-England ‘test match’, in South Africa? The effect of all this is unfortunate: by the end, I was reading Nine Lives less to appreciate it, more in anticipation of the next error, or needless repetition.

Sadly, that takes away from an effort to understand an India that I’m not sure how many Indians would attempt. For Dalrymple lets folk speak on these pages whom few of us even notice, let alone listen to. Their stories are rich and wrenching at once, the vivid pastiche of images reminds you of episodes in your own life, they are always evocative of the smoky and caterwauling places where he meets these people.

There’s the dancer who, in a frenetic climax to his performance, drinks the blood of a beheaded chicken. A twinkle-eyed minstrel gets leukaemia, is refused treatment at several hospitals, and is gone while you’re still savouring his zest for life. A monk suppresses his beliefs and goes to war, only to find that it isn’t about right and wrong, but about political machinations in distant capitals. A sculptor fights the distraction of moulding ‘rounded breasts’, telling Dalrymple: ‘Self-discipline is the most important thing.’ And the singer who ‘wanted to learn how to close the mouth of the snake and boil the milk of bliss’, I’ll let you figure that one.

The deaths touch chords. An HIV-positive devadasi is left to die by her family—who lived off her earnings while she was healthy. I knew a Tamil Nadu widow similarly supportive for years of her family; when she grew old and ill, they had no time for her and she died abandoned. As a release from a crushing disease, a Jain nun chooses to die. The account of her death could have been of that sad, yet peaceful evening when my father left us.

Dalrymple is a first-rate journalist, with an eye for detail, shade and completeness that gives his accounts authenticity. He works hard at what he does, and I envy him his knowledge of my country. In this book, as in his others.

Yet Nine Lives has too many signs of a creeping—not ‘creeking’—complacency, a laziness, perhaps even the assumption that colour and vividness are now enough. Really, no writer should have repeated ‘numberless pantheon’, certainly not Dalrymple. So when you see that, you see the repetition at other levels too. Both the Red Fairy and the Lady Twilight hear ‘Come to me’ in the midst of suffering. Both follow those voices to their respective spiritual homes. Both have been there 20 years.

Trivial stuff? But ‘numberless pantheon’, with so much else, makes you wonder. That’s the pity of this book.