Have You Heard This?

Audio books are becoming big business in India, and not just in English 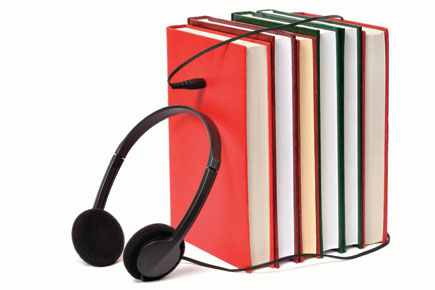 Audio books are becoming big business in India, and not just in English


Imagine an illiterate chauffeur with nothing to do after he drops his boss to office. Think of him relishing a work of Rabindranath Tagore, say Kabuliwallah, as the story is told through a CD player. And while at it, imagine all the chauffeurs in that parking lot listening to something and then exchanging CDs in the evening.

Some would say audiobooks open up a whole new world. In reality, it’s just the old art of storytelling packaged differently. Its market lies anywhere between self-help books consumed by the marketing student to the affluent bored auntie listening to chakra healing exercises. Its potential market also lies in the vast number of illiterates in this country. “Audiobooks, at their broadest level, can make the world of books accessible to someone who can’t read or doesn’t have the time or inclination to. At their narrowest, they are an option for FM channels,” says Jayshree Mantri Easwaran, co-founder of the Bangalore based BooksTalk.

An unusual feature Easwaran observes in India is that the English audience makes up less than half the audiobook market. The real readers (or listeners) are in the regional language segment. “The wonderful thing about audio books is that you don’t need to know the script of a language. Though I grew up in Bengal, Bengali is not my mother tongue and I don’t know how to read or write it. Being able to listen to a few verses of Tagore whenever the mood comes over me, is the joy of an audio book for me,” she says. BooksTalk has five books in Kannada, two in Bengali (and three more on the way) and fifteen titles in English.

The stars of the audiobook world are self-help and business books. Reado.com’s current titles include Amish’s Immortals of Meluha, Rashmi Bansal’s Connect the Dots and Stay Hungry Stay Foolish, Vatsyayana Mallanaga’s Kamasutra and also Alice in Wonderland and Jungle Book. When Reado started placing its products in bookstores and airport lounges, the website was expecting fiction to sell well. “Instead we found business and self-help selling more. It surprised us initially. We soon realised that in India fiction is considered a literary pursuit. Business books are about gathering information and benefitting from it. So people don’t mind ‘listening’ to advice from audio books but would still prefer to ‘read’ fiction,” says Kunal Pancholi, co-founder of Reado.com.

There was one exception, however: children’s fiction. Alice in Wonderland and Jungle Book had really good demand. CP Vishwanath, director of Karadi Tales, which through its imprint of Charkha Audiobooks has more than 50 titles in its catalogue, has an explanation for the popularity of children’s audio books. Because they are for children, the stories are usually limited to 20 to 30 minutes. An adult novel would need hours to listen through to completion. “Adult fiction is in the range of 20,000 plus words. It requires continuity. In India, we don’t really have long drives—we have an hour or so of stop-and-go traffic snarls. Worldwide, fiction is ‘read’ on interstate highways. In switching on and off while ‘reading’ fiction, you lose the book experience. The consumption demographic for adult fiction in India is very difficult,” he says.

On the other hand, children’s audiobooks is a competitive market with many players. It takes an entirely different creative approach to tell the story. “The script, the narration, background music, songs, illustrations, etcetera, have to be right from the word go. The child has many options today and so your product has to be very strong to get noticed. That’s the reason why many people haven’t entered this category,” says Vishwanath.

BooksTalk is among those that haven’t entered the children’s market. “We have consciously kept out of the space. That is a whole different ball game involving music, sound elements, etcetera. It’s an investment we are not considering right now,” says Easwaran. Instead, she is focusing on the regional audience and targeting small town India. “Most Tier II and Tier III towns don’t have bookstores but they all have music stores, even if it’s a little corner shop selling tapes. The problem with this market is the medium. Not everyone here would have MP3 or CD players. But they all have cellphones, which can play the MP3 format. While we are looking at authors and publishers with regional titles, we are also exploring options with mobile service providers. Just as they offer Bollywood songs for download, they could also offer mobisodes—packages of intro and story for download. And just as books are available on CDs, they could also be made available on SD or micro SD cards to be inserted into mobile phones. There are endless possibilities.”

Participants in the audio books market can opt for many forms. Some of the titles on Audiobookindia.com’s bookshelf include Barack Obama’s The Essential Barack Obama: The Grammy Award-Winning Recordings (Abridged), Stephen R Covey’s Beyond The 7 Habits and Andre Agassi’s Open: An Autobiography, among a host of others. But the beginnings of the Bangalore-based Audiobooksindia.com were more utilitarian.  “We were into infotech, domain and network training etcetera. We extensively used audio books as training manuals and had clients all over India. We saw the business opportunity was immense. It made sense to start a comprehensive portal,” says R Abhilash, business development head. Audiobookindia.com doesn’t make audio books, and nor is it a distributor. It is an e-commerce platform. “We import most of our titles and they are on the higher side compared to other audio books available in the market simply because we have to pay an import duty, whereas Indian publishers merely have to pay tax,” says Abhilash.

With a burgeoning market, there are also digital rights management (DRM) and piracy issues. “No one has cracked the right kind of DRM yet. Only when we have figured that out, can we go ahead and get into the digitisation of audio books—making them available for download from our website. It would throw open a huge market but there would be the accompanying problem of piracy,” says Pancholi of Reado.com. BooksTalk prefers to treat piracy as competition rather than a problem. To counter it, it has kept its base prices low. “If something is given at a reasonable price, it does not make itself very attractive for piracy.

To that end, we have purposely not data protected our content right now; we want the medium to get popular first,” says Easwaran. “There is a huge population of maids, drivers and others for whom listening is easy while they do their daily chores. The important thing is, will they pay for it? We believe if the pricing is just right, then sales will pick up.”

Still, a cautionary tale is in order here. Having failed several attempts to plough through Chaucer’s Canterbury Tales, 32-year-old freelance writer Saumya thought it was time to give technology a try. She bought a recording of some selections and put her iPod to work. A friar introduced a story about a coxswain (or some such archaic profession), but before he could continue, a seamstress (or was she a handmaiden?) interrupted with her own story, and right about then, another wholly new person stepped in with yet another story. Saumya realised she was hopelessly lost, and more tragically, Chaucer was lost on her. It was then that she glanced down at her iPod—it was set to ‘shuffle’.