Harper Lee will always be celebrated for her portrayal of childhood and for showing us that most people are nice, when you finally see them 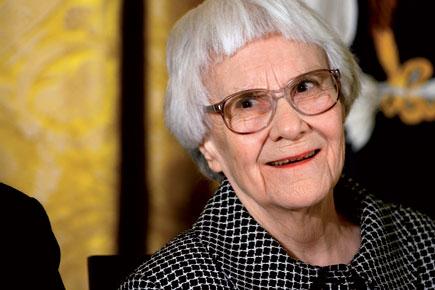 The news of a death is always followed by a flurry of revisits. If January was spent listening to David Bowie, February will be the month of re-reading To Kill a Mocking Bird. Harper Lee aged 89 died yesterday. To return to Mocking Bird is to remember all the reasons one first loved it as a 12-year-old and to find in it meanings anew. Like the fairy tales of childhood, it is a simple parable of good versus bad, justice versus injustice. It reinstates the father as a noble figure, the brother as a companion and the world as a place where bad things happen but where an uneasy peace finally prevails. At the end of the day, what other reassurance does one crave? The homily of its 320 pages is: ‘Atticus was right… you never really know a man until you stand in his shoes and walk around in them. Just standing on the Radley porch was enough.’ It is a simple line, which cuts to the very heart of discrimination. If we could all stand at another’s porch we would be less quick to judge and condemn, and more willing to understand.

Centred around a Southern lawyer who fights the case of a black man falsely accused of raping a white woman, first published in 1960, Mocking Bird has sold more than 40 million copies and has been translated into more than 40 languages. While the novel is celebrated for its study of race and relationships, its portrayal of childhoods makes it special. It describes school days as: ‘an endless Project… in which miles of construction paper and wax crayon were expended by the State of Alabama in its well-meaning but fruitless efforts to teach me Group Dynamics,’ and summer as ‘sleeping on the back screened porch in cots, or trying to sleep in the tree-house; summer was everything good to eat; it was a thousand colours in a parched landscape…’ Told from the perspective of a 10-year-old, childhood here is not simply about schooldays and play grounds, but also a position from which to understand race and society, politics and justice. It is a position not simply as observer but as decoder of the world.

If the child is central to the novel, in the film version (1962) Gregory Peck overshadowed all. Atticus and Peck became synonymous with the other, ensuring the book's posterity.

Mocking Bird’s status as the Great American Novel remained uncontested because Lee never followed it up with another book. Not till 2015 that is. Written before Mocking Bird but published more than half a century later Go Set a Watchman told of a very different Atticus and Finch. Atticus had grown embittered and (the horror!) even racist. Scott was now an adult coming to terms with the realisation that her father might not be the bravest man of them all. If Scott is battling with the fact that her father defends segregation during the civil rights movement, readers too roiled and raged against this revelation. To learn that our childhood heroes are not heroes is betrayal but it is also an opportunity to grow up. Even while the book might have disappointed most readers and all fans, it quickly made it to the bestseller list, establishing yet again Lee’s undisputed place in the world of letters.

Lee is a rare author whose book is legion, while she has remained a recluse. Her craving for anonymity, her unwillingness to speak to the press and rare public appearances only added to the aura of her work. Mocking Bird was never diluted by its author’s overreach into the public. Even while she might have stayed away from the gaze the tributes to her flowed in from readers who’d read her as a child, writers who loved her work and even the President of the United States who said, “Through the uncorrupted eyes of a child, she showed us the beautiful complexity of our common humanity, and the importance of striving for justice in our own lives, our communities, and our country.”

Lee will be always be celebrated for reminding us to place our humanity first.