John Man’s book on the warrior king Genghis Khan tries hard to make a leadership guru out of him. And falls flat 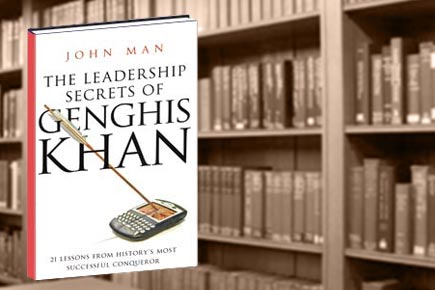 John Man’s book on Genghis Khan tries hard to make a leadership guru out of him. And falls flat


Nice try, Mr John Man. If only it were this easy: nominate a Khan of your own choice as the new conqueror of hearts and minds, and leaders will take the cue. It won’t happen, not with Genghis Khan installed as the guru.

Man’s latest work of nominal non-fiction begins earnestly enough. The Mongol conqueror’s great feat of genius, he writes, was his defiance of the Peter’s Principle (which holds that careers are designed to promote everyone to his or her level of incompetence, and no further, thus ensuring that incompetents are in charge of everything). If so, then what Genghis escaped in his own super successful lifetime (1162-1227), he finally succumbs to in this book—because of Man’s attempt to thrust gurudom upon him.

‘Know your limitations’ is ‘Secret 6’. It seems Genghis put this wisdom to practice by getting someone who was actually literate to pen his hagiography (Man’s main research source too); just think of all the corporate chiefs who’ll be jolted by this flash of revelation into firing off Blackberry memos to have the job outsourced exactly so. The rest of the leadership secrets involve controlling messages, rewarding loyalty, taking criticism (from Mom), keeping promises (threats especially) and upholding a vision that’s worthy of an empire builder for whom the massacre of a million odd people along the way is no big deal, or at least ‘nothing personal’.

To Man, this impersonal approach is the stuff of advanced leadership. ‘It is not loyalty to a particular lord and master that Genghis upholds,’ he says, ‘it is loyalty to the idea of loyalty.’ For this, mankind is expected to be eternally grateful—‘It is this thought that, in mature democracies, lies behind loyalty to the idea of democracy.’

Oh yeah? By this token, how about devotion to the idea of demagoguery? Man-made or Genghis-made, ideas are ideas… they rule, right? Either way, to a writer so sold on the idea of drawing false analogies, so unsheepish in shielding his polemics from the truth, and so severely shrinkwrapped by the tint of his own cling-film, this sort of criticism would make little difference.

To be fair, Man’s book is not utterly useless. It does explain how the Mongols’ origin as nomads fanning across Asia’s open grasslands turned them into such fearsome warriors. It’s just that by the time these hordes veered around to war strategies worthy of any serious study down the ages, Genghis Khan had long been consigned to ancestral memory. These were strategies devised by warriors who saw books as things to saddlebag horses with, not flush down the river.