Bestselling author Ken Follett on the pressures of writing chartbusters, the effect of JK Rowling on the world, and the five greatest books of all time 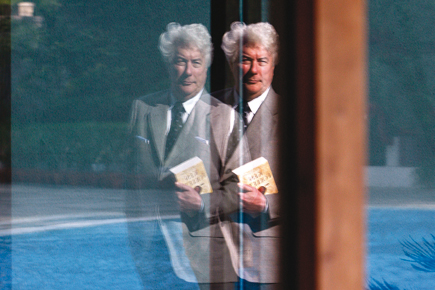 Bestselling author Ken Follett on the pressures of writing chartbusters, the effect of JK Rowling on the world, and the five greatest books of all time


Ken Follett, the acclaimed author of 18 bestsellers, including the recently released Fall of Giants, writes thrillers on a variety of topics, ranging from religion to science. His books, half-historical and half-fictional, have touched on various time periods, such as the two World Wars, the Cold War and the present day. In a conversation with Open, he explains why he likes to change things around and not get caught in a niche.

Q Fall of Giants is a pretty big book, and it’s the first of a trilogy. Not only is it a historical account, it follows five families from different countries. How much time does it take to research these books?

A There is a lot of research. I spent six months reading the history of the 20th century. Then I focused on Fall of Giants, and did six months more of research and planning. I spend a lot of time planning my books. I spent just over a year for the first draft, and just under a year for the re-write. Most of the research I need can be found in books, but I do also like to use old maps and old photographs and film footage, where available. There are very good photographs of this period. For example, I have a book called Before the Revolution which is a book of photographs of St Petersburg before the Russian Revolution. That kind of thing is very helpful to me. The clothes people wear, what the buildings look like, the buses and trams and so on… And then, when I have written the first draft, I show it to experts, and pay them to check it for errors. Fall of Giants was read by eight historians. Every time, a few mistakes slip by, but not too many.

Q In Fall of Giants, all the families are based in the West. Do you have any plans for Indian families? Would you happen to be  doing any research in India?

A No, I don’t think so. First of all, you can’t do everything. When I was in Italy, every journalist asked me why I had left Italy out of the First World War. There are so many good Indian writers, and writers of Indian origin in the UK; it’s their territory, and they do it much better than I possibly could. However, I do think it is important not to give the impression that the First World War was an all-White affair. So I have mentioned the Indians who fought on the British side in the War. Not many people know that a million Indians fought in the British army during the First World War.

Q This is your 18th bestseller. Do you feel a lot of pressure on you to produce a bestseller every time you write?

Q According to your website, you have a stiff schedule to keep, with the sequel to Fall of Giants due out in 2012. What’s your daily routine like?

A I like to start early, so I usually start at 7 in the morning. I wake up, make tea, put on a bathrobe and go to my desk. My head is full of the story when I wake up, so I sit and work, with the usual breaks for breakfast and lunch. I work until 5 o’clock. At 5, I do business for an hour; emails, letters, phone calls, that sort of thing. And then at 6 o’clock, I have a glass of Champagne.

Q The Pillars of the Earth was voted by 250,000 people on the German channel ZDF as the third greatest book ever, after Lord of the Rings and The Bible. What was your reaction to such a vote?

Q I know it’s a tough question, but what do you consider the five greatest books of all time?

A My goodness! Greatest books of all time? Let’s talk about novels, since that’s where I am an expert. Still a tough question, but I would have to say Great Expectations, To Kill a Mockingbird, Madame Bovary, Middlemarch and Pride and Prejudice. (Laughs) I reserve the right to give you a completely different answer if you ask me this question tomorrow.

Q You were a voracious reader as a child. Does what you have read years ago have an effect on what you are writing now, or do such influences occur later?

Well, as a child, of course I read children’s books. But I liked adventure stories, stories about spaceships. As a boy there were stories about these kids who knew a professor who built a rocket in his back garden, and took them to the moon and mars. I loved those stories. As a teenager, I loved the James Bond stories. The main thing about those authors like Ian Fleming is that they taught me that literature could be exciting. Ian Fleming was a big influence on me, not because I write like him, or my stories are like his, but because I loved his books so much. When I started writing, I wanted my readers to feel the same excitement when they picked up my books as I did picking up his.

Q What do you think about John Grisham and Jeffrey Archer, and how do you compare their work to your own?

Well, Jeffrey is a great storyteller. Grisham has a narrow field, it’s law. Which, of course, is a great theatre. And Grisham exploits that very well. I have enjoyed many of his books immensly. Of course, JK Rowling has done more to encourage children to read than anybody in history. She deserves every single million dollars she has ever made.

Q So, there are some authors who like to create a niche for themselves, like Grisham with law, or Dick Francis with horses and horse racing. Are you considering such a strategy?

Well, I have tried not to do that. I like to change things about. I have written Word War II thrillers, contemporary thrillers, science thrillers, and haven’t felt the need to repeat what I did the last time. It works for me, and I think readers like it as well, because they’re never quite sure of what to expect out of a new book of mine.

See, the writers I like are often writers who don’t write like me. Stephen King, for example, I’ve read everything written by him, and my style is nothing like his. My writing style is to be so clear that you don’t see my writing style. My aim is for my writing to be like a window. You don’t see the window, you see through it, you see the story.

Q You studied philosophy in college, and some argue that to understand philosophy, you need an out-of-the-box imagination. Did that help you as a fiction writer?

Well, I think it’s connected. I studied philosophy because as a young man I was very concerned about religion. I was brought up in a very religious family, and had conflicts with my father over religion. Studying philosophy was a way to help me think about these things, and make up my mind about religion. But you’re quite right, it requires the kind of imagination that writing novels requires. When you study philosophy, you can say things like “Well, here’s a glass of water, but is it really there?” The rational person would say “Don’t be stupid, of course it’s there” but an imaginative person would agree with the philosopher, the glass could maybe be a dream, an illusion.

Q You play the bass guitar, and are in a band. Can we expect an album with your next book?

(Laughs) No, it takes too long, for one thing. We did make one good recording. It’s on an album called Stranger than Fiction, in which various authors came and sang. Steve King came and did a few tracks, as did Norman Mailer, and my band did one. It was to raise money for literacy volunteers in America. But nobody in the band has the time to bring out an album.