Five Pages That Became a Film

Tracing a Ruskin Bond story to a Vishal Bhardwaj screenplay, and discovering what got lost in the process 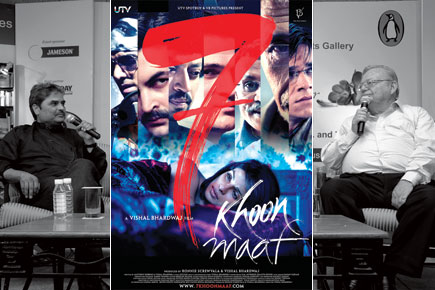 Tracing a Ruskin Bond story to a Vishal Bhardwaj screenplay, and discovering what got lost in the process


Asked to write a film in the late 1940s, the novelist Graham Greene could only proffer something he had once casually scribbled on an envelope flap: ‘I had paid my last farewell to Harry a week ago, when his coffin was lowered into the frozen February ground, so that it was with incredulity that I saw him pass by… among the host of strangers in the Strand.’ It was the bare outline of a story, little to do with what the producer wanted—a thriller set in post-War, Allied-occupied Vienna—but Greene developed the premise, first into a novella and then a screenplay. That single-sentence scrawl begat one of the most visually distinctive films ever made—Carol Reed’s classic noir The Third Man.

Something comparable happened with Vishal Bhardwaj’s 7 Khoon Maaf, which was inspired by Ruskin Bond’s short story Susanna’s Seven Husbands. Bhardwaj chanced upon the five-page story, requested Bond to expand it into a novella, and developed it into a screenplay with Matthew Robbins. Now that the film is out, Penguin India has published the original story, the novella and the screenplay (in a mix of Roman and Devanagari scripts) in a single book—an excellent idea, since reading them together offers insights into how a story becomes a filmable script, and what might be gained and lost along the way.

Bond and Bhardwaj are strange bedfellows. The former’s work is droll and genteel in an old-fashioned English way, evoking a bygone way of life, while the latter’s best films are set in the contemporary Indian hinterland, peopled by rough-speaking characters. The two men do share a penchant for dark humour, but their personal styles are very different: Bond’s prose is marked by seemingly effortless simplicity while Bhardwaj’s films tend to be dense and baroque, with layered use of colour and music. A few years ago, he took Bond’s gentle children’s story The Blue Umbrella, gave it the texture of a Brothers Grimm fairytale, and shifted the narrative focus, providing Pankaj Kapoor with one of his best roles as a greedy Himachali shopkeeper.

The original Susanna’s Seven Husbands is one of those concise, anecdotal tales that Bond does so well, with an unnamed narrator learning about the life of Lady Susanna, an inveterate husband-collector (and probable husband-murderer) who lived in Old Delhi around a century ago. In the novella, Bond modernises the story and gives us a new narrator as a point of entry: a young man named Arun who lives next door to Susanna’s vast Meerut estate, forms a close friendship with her and tracks her conjugal adventures over the years with a mix of fascination, alarm and envy.

Reading this longer, commissioned version of Susanna’s Seven Husbands, one almost gets the sense of a storyteller writing an elaborate personal letter for a filmmaker friend. Bond indulges himself, making a few filmi references: one of Susanna’s husbands is described as having a ‘Jackie Shroff-type moustache and the long legs of an Amitabh Bachchan’, a minor character is named Shah Rukh, and there is a mention of Bhardwaj’s film Maqbool. The writing is somewhat hurried, but all the Bond virtues are in place, notably the clarity and graceful humour. More atypically, there’s even a bit of sex—‘He started off by being tender and passionate, but his brain would not send the right message to his loins, and he found himself as ineffective as before.’

The screenplay that follows retains some plot details: the idiosyncrasies of Susanna’s spouses and the manner of their untimely deaths, in which a goonga (mute) jockey and a middle-aged help play their parts. But the changes are a pointer to the sort of film Bhardwaj wanted to make. Thus, one of the husbands, the Prince of Purkazi, becomes a well-known poet named Wasiullah Khan (facilitating the introduction of Urdu couplets into the script) and a South American diplomat morphs into a Russian attaché who supplies comic relief by goofily speaking Hindi and singing Awaara Hoon.

In the original story, the narrator fleetingly likens Susanna to the husband-devouring Black Widow spider, and Bond elaborates this in the novella (‘It was some time since she’d dined off a fat, juicy male. Now she was thinking of moving her web elsewhere…’). However, the Susanna of the screenplay isn’t so much a spider as a chameleon, adapting herself to each new husband—she becomes a vodka-drinking Anna for the Russian, she says namaaz  while she’s married to the Muslim poet, and she sings a line of Rabindrasangeet for her Bengali husband. She’s a blank slate for these men—in one case, almost literally (one of the more romantic scenes in the script has Wasiullah ‘writing’ his name on her outstretched palm). In the process she turns into a more sympathetic figure, which is one of the problems with the makeover.

There are essentially two ways of handling the tale of a woman who bumps off a line of husbands: either be lightheartedly amoral about it or provide a properly worked-out explanation for her psychosis. Bond takes the first approach in both his versions, helped by the fact that the original was set in the time of the Raj. And as he pointed out during a recent discussion in Delhi, “Perhaps we find murder in colonial times easier to accept!” The closest he comes to providing an ‘explanation’ for Susanna’s impulses is a passage where she says she can’t help what she’s doing because she feels ‘the sudden hatred that practically every wife sometimes feels for her husband just because he is her husband’.

But Hindi cinema doesn’t have a well-developed tradition of truly irreverent black comedy, and the screenplay seeks an uneasy middle ground; it retains the darkly comic aspects of the narrative but also resorts to sentimental explanations. Bhardwaj and Robbins make the husbands downright unpleasant. One of the novella’s more flippant chapters—a spouse who must be dispensed with simply because he is obsessed with his cellphone—has been dropped altogether, and replaced with an episode where a shady policeman gets his just desserts. Another key difference is that Arun becomes an underprivileged boy on whom Susanna ‘Saaheb’ bestows kindness. To an extent, this was a practical change: Bhardwaj had to make his sutradhaar an active part of the story rather than someone whose life occasionally intersects with Susanna’s, but it also performs the function of thickly underlining her compassionate side.

The script is least engaging when it tries to persuade us that Susanna ‘sacche pyaar ke talaash mein hai’ (she’s searching for true love). The resolution—with our heroine discovering the perfect ‘seventh husband’ as well as salvation—is weak too, introducing ethical considerations and the concept of redemption into a story that could have done without them. Happily, though, this is one of those books where even the flaws are revealing and well worth the reader’s time; especially if you’re interested in the complexities of story-to-film adaptation, and the nature of artistic collaboration between people with different sensibilities.