From Goat Days to his latest novel, a murder mystery, Malayalam writer Benyamin is one of the most compelling storytellers of his generation 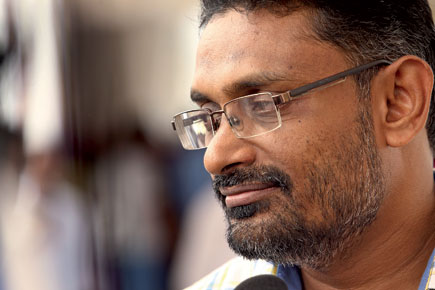 After his 2008 novel Goat Days made Benny Daniel or Benyamin a household name in Kerala, a poor old woman came to meet him in Kozhikode. She told him that her son had been adamant about migrating to the Gulf even though no one in the family had wanted him to go. The woman then gave the boy a copy of Aadu Jeevitham, as the book is called in Malayalam, and that worked: the book changed his mind “She told me that her son is in the fish trade now and living a decent life,” says Benyamin.

Goat Days demystified the stories of Gulf prosperity for Keralite readers. Najeeb, the protagonist in the novel, finds himself forced to work in a goat farm in a remote Arabian desert. With human contact forbidden, he lives in total isolation as if banished to an alien planet inhabited by goats. He develops an attachment to the animals, christening a new born goat Nabeel, the name that he would have given his child. When Nabeel is castrated, Najeeb too loses his manliness.

The story was based on the life of a trafficked and enslaved migrant, Najeeb, whom Benyamin had encountered while working in Bahrain for a private company that delivered goods to the US army. “When I first met Najeeb, he was talking about things like his aspirations about the Left coming into power in Kerala, his concerns about CPM and all. I started meeting him almost every day and slowly he unfolded the chilling account of his goat days. It lasted three-and-a-half years before he got a new job in the company where I was working.”

Every Malayalee is connected in some way to the Gulf migration story through relatives or friends, and the novel touched a chord that saw Aadu Jeevitham becoming the most popular book that DC Books has published. The old woman’s visit was not the only unusual response he received. “A person rang me at 2 am. I thought it could only be an emergency call at that time of the night. He asked me whether I had slept. I told him what else does a person do at 2 am? He then said that he had lost sleep after reading Aadu Jeevitham. He demanded that I too should therefore not sleep.”

As a migrant to the Gulf, like millions of others, Benyamin too lived with rootlessness and displacement, remembering the homeland, the greenery, the monsoon, the rivers and the forests. He took to reading to survive it. Writing would come much later. “I migrated to Bahrain at the age of 21. I took reading as a serious affair after that. I would not have survived otherwise,” he says.

It was only at the age of 29 that he first started writing. “When I started reading, I never thought of becoming a writer. I only read for eight long years and slowly realised that I too had something to say.”

Displaced existence is a perennial theme in Benyamin’s writing. This is true of his latest novel, Manja Veyil Maranangal, translated into English as Yellow Lights of Death (Penguin, 394 pages, Rs 279) by Sajeev Kumarapuram. It is a murder mystery but also talks about shattered lives dislocated from geographical and cultural origins. “Others call it a crime thriller, but I call it a story of displacement,” he says.

The original Malayalam version was acclaimed for its uniqueness, a whodunnit that is narrated as a story within a story; narratives that run in parallel and in which real life characters interact with the fictional.

The book has the author, the real life character Benyamin, receiving a mail from an unknown person who has attached a portion of his biography and requests him to find the remaining parts that have been entrusted to others. The author sets off with his friends on a journey to find them, with each part providing a lead to the next. The person who sent the mail is the story’s protagonist, Christy Anthrapper, who has witnessed a murder in broad daylight and later realised that the victim was his classmate Senthil. The state tries to pass off the death as a natural one, and Christy, who is unable to find evidence of the murder, goes frantically in search of the truth. The story switches between Benyamin’s journey and Christy’s.

Those who read the novel looking for a conventional crime thriller may be disappointed, as Benyamin admits. The murder and missing man only form a thread for the author to weave a story about a man’s move from continent to continent in search of himself. “I did not have the intention of writing a detective story,” he says. “When I started, what I had in mind were the intricacies of displacement and the longing for migration. Settling somewhere and having an unmoving life till the end is essentially against human nature, I believe.”

Born into a lower middle-class Syrian Christian family at Panthalam in Pathanamthitta district, Benyamin’s childhood was uneventful. “My father was a taxi driver and mother a homemaker. I have nothing special to recollect. My childhood was like that of any other in the locality. After the completion of my pre-degree, I opted for a polytechnic diploma which was an easier step to the job market.” His love for books began in this period. He had a few friends in his village who introduced him to Malayalam literature. “Regular visits to the panchayat library and conversations with friends might have sowed the seeds of literature, but even I didn’t realise that it was the beginning of my journey as a writer.”

When he went to Bahrain as a young man, it was hard for him to adjust. “Like any other Malayalee, I too lived in nostalgia, cherishing memories and struggling to cope with the departure. Reading Malayalam books was the only way to keep myself connected to home. Friends in Kerala collected books. Those who were going on leave back to Kerala did not return with pickles and banana chips for me, but books.”

His first story Shathru (‘The Enemy’) was published in a literary supplement in 1999, and his first book, Euthanasia, an anthology of short stories, came out in 2001. Benyamin remained a relatively unknown writer in Malayalam literature despite having published half a dozen books. But in August 2008, Aadu Jeevitham was published and he suddenly became a bestselling writer. “My father was happy when my name was carried by the media. Apart from that, nothing really changed at home,” he smiles.

His new book is different from that work in style and content. Benyamin explains it thus: “A writer makes a mould. If it proves successful, he has a tendency to create another story that fits into the same mould. This is undesirable. I am trying to break my own style in each work. I believe that’s the element that keeps me writing.”

Benyamin returned to Kerala when it became difficult to both manage a job and write. “I had to make a choice,” he says. He now lives in Panthalam with his children and father. His wife, Asha, a nurse, continues her expatriate life. Benyamin is now busy with his new novel based on the interface between the Catholic Church and the Communist party in Kerala.

NS Madhavan, a Malayalam writer and commentator, thinks Benyamin belongs to that rare breed of writers who are ‘successful’ and also win critical acclaim. He says, “Goat Days, which is almost reportage, stands out because the writer had internalised the subject .The same strain continues in his later works also. It is what compels people to read him.”