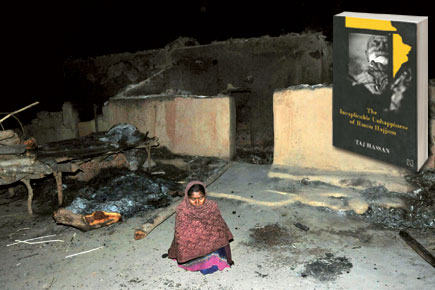 
Sometimes publishers fail to realise the potential of a book. That is what has happened to Taj Hassan’s debut novel, The Inexplicable Unhappiness of Ramu Hajjam. Hachette India brought it out in a pocketbook format last year and it went unnoticed because of its size. It would have escaped my attention as well had not my old friend, Mirza Afsar Baig of Midland bookshop, pointed it out. I began reading it a few weeks after I picked it up, and the first thing that struck me is the way in which the reality of a village in the Hindi heartland is depicted.

One day, a landlord comes over to Ramu Hajjam’s roadside salon for a shave. His face gets nicked by the razor, and he mercilessly beats up Ramu, who does not offer any resistance. Such violence is a reality in the lives of people like him, and he accepts it as part of his destiny. However, the year is 1991 and news is rife that Maoist guerillas have established camp across Kareh. Ramu Hajjam’s young son Pawan decides to avenge the humiliation meted out to his father, and joins the Maoists.

Hassan grew up in Bihar’s Begusarai and is no stranger to caste equations or the Maoist movement in the state. Besides, he is a senior police officer, now with the Delhi Police, who had earlier served in Bihar too. The language Hassan uses is simple, but the story he weaves through his characters and his understanding of their society makes the novel an interesting read.

Hassan meticulously details the complexities of a Bihar village. Murali, for instance, is a compounder who trains himself with a pharmacist and starts treating patients without a recognised degree. Or the way Pawan establishes contact with Maoists. Or how upper-caste men rally around the landlord Achal Singh on feeling threatened by Maoists—a reminder of the brutality unleashed in Bihar by the Ranvir Sena and Maoist Communist Centre cadre. Or how the State fails to act against atrocities heaped upon the poor and marginalised, but somehow turns ‘proactive’ when it comes to protecting the interests of the wealthy and influential.

For this writer, who has reported extensively from Maoist-strong areas, Ramu Hajjam could be anyone from this part of India. And indeed, he seems inspired by a real character Hassan met in Giridih, a Maoist bastion that was once a part of Bihar.

For those who often wonder what is happening in India’s backyard, Hassan’s remarkable story is a must- read to understand how gross inequality and social injustice have led to a chasm between India and Bharat, and between the many Bharats that exist in a Bihar village.

In an interview in 2010, Maoist supreme commander Ganapathi told me that in terms of social, economic and cultural ties, or in terms of ‘movement’ relations, Giridih and Gurgaon are not two unconnected islands. The story of Ramu Hajjam offers testimony to the fact that the war being fought in distant Giridih may not be very far from Gurgaon.