Not after you made us wait 35 years. Not after this thrilling new collection of poems, subtle and intricate and so mature. Not just yet, Adil Jussawalla 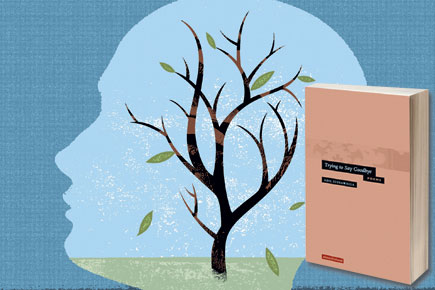 Not after you made us wait 35 years. Not after this thrilling new collection of poems, subtle and intricate and so mature. Not just yet, Adil Jussawalla


There are poets who travel a lot and write frequently, but I have always felt that poetry needs more space to write than fiction or any other literary genre. What often threatens poetry is not commercialisation etcetera, which are secondary phenomena, but that we live in a world in which (as Linton Kwesi Johnson puts it in a poem) ‘more time/ we need more time’.

Adil Jussawalla has taken his time. Trying to Say Goodbye is his third full collection, and the last one came out in 1976. That, combined with the fact that Jussawalla is a seminal figure in post-Independence Indian poetry, makes this collection worth the attention of all poetry readers. But, more importantly, the poems in Trying to Say Goodbye deserve our attention.

It is a quiet voice one encounters in this collection, somehow recognisable throughout the pages despite the fact that the poems have been written across decades. It is an index of Jussawalla’s assurance as a poet and his ability—essential to any mature creativity—to rework material that the poems, the earliest of which are based on drafts going back to the 1950s (as a note appended to the book says), seem to be part of one work, one book.

Jussawalla started writing in the wake of Modernist influences, ushered in largely by the late Nissim Ezekiel in what was then Bombay, and he has stayed true to that tradition. And yet to use a term like ‘Modernist’ to describe Jussawalla is not to do full justice to the particular heft of his poetry.

It is urban poetry; it reflects a modern sensibility; it employs irony and very subtle differences of tone and register; it moves away from rhyme far more often than it moves into it; it concentrates on the fleeting moment, the evanescent emotion, the riven experience. Home, or lack of it, remains a concern: ‘…and not knowing what to call it, call it home.’ (A Place) Again and again, loss, pain, homelessness are faced, not as much through art, though that is an aspect too, as through an artful poise in life. As Jussawalla says in one poem,

‘Learn balance with nothing to stand on. / Though you’ve lost heart, lost ground, / Go rootless, homeless, but balance.’

Balance is a key element in these poems, poised as they often seem to be on pinheads of the moment. Take, for instance, ‘Silhouette’, which appears to have been written during the Emergency era or some such recurrent moment of disciplinary State action. It starts simply, but with one of those effective uses of older rhythmic and rhetoric traditions—in this case almost reminding one of a ghazal too—that Jussawalla, like any other good ‘prose poet’, is fully capable of:

Then it moves through two vignettes—broken images shored against ruin—of a flat-faced man eulogising discipline and falling silent, and a ‘silhouette’ across the street that ‘hits out and runs, hits nothing, runs’. The poet continues, bringing up the terror of persecution and torture in a few ordinary and understated images:

‘Twenty years on, its feet broken, / will its hands fly to its face when a light’s switched on? / Will it lie on a plank for days, twisting a handkerchief?’

The poet wishes this ‘silhouette’ ‘…a straighter back, a stronger earth/…a game that won’t cripple’, while Ravi ‘studies his car keys and is silent,’ clouds make a noise ‘like MIGs flying in low’ and a boy ‘continues his game of make-believe cricket.’ That is how this poem ends, capturing so much of the elusive sad beauty of life in what is said, and, more importantly, what is not said. Jussawalla does not write overtly political poems, but poems like this one make one understand why overtly political poems often run the risk of over-statement and failure.

As in this poem, and so many others, including the excellent title poem, the poet speaks in the first person, observing, commenting, reporting, and sometimes interrogating in an oblique manner. But this is not the ‘I’ of the brash young poet, or the ‘I’ of the romantic tradition, or the ‘I’ of the society type and the good neo-liberal consumer. It flaunts no manifesto or brand. Instead, it is the ‘I’ of experience, the ‘I’ that has gone through and is going through life—with other people. This first person does not obscure other existences; it registers them even more vividly. Moreover, this first person is not always the same person. This is such a relief, for the world seems to have been suffering from a diarrhoea of ‘my life, my culture, my loss’ poems for some decades now.

It is difficult to do justice to Jussawalla’s sense of timing, rhyme and rhythm. As all good poets know, the best prose poetry is written not through an elimination of rhyme and rhythm but through nuanced and conscious deviations from them. A poem like Trying to Say Goodbye—as well as many other poems in this collection—is a good example of this.

The ‘trying’ in the title of this poem, and the collection, is worth lingering over. A lesser poet might have just said goodbye. But Jussawalla is interested in the act, the effort, the intention, the moment; the achievement and the ‘end product’ are always suspect or elusive in his mind. Failure, at least partial (or, perhaps, only partial), is a condition of life in his world. Hence, his poem cannot be about saying goodbye; it can only be about trying to say goodbye.

Trying to Say Goodbye begins with one of those ghazal-like couplets—Agha Shahid Ali’s ghost is not the only one haunting Jussawalla’s mansion of intricate corridors—that one encounters in other poems in this collection too:

‘Since you made turning my world upside down look so easy, I’ve been turning things over too, taking it easy.’

And, going through a subtle and suitably hazed (not hazy) recollection of loss, as reflected in five glasses of drink, ends with this triplet:

‘With the fifth is the bombshell I’m ready to throw / And you look like you’re ready to spit. / I won’t say goodbye, for the hell of it.’

I won’t spoil lines like these by laying out their machinery, but notice, reader, the context, the sly humour of ‘ready to throw’, the movement from ‘throw’ to ‘spit’, the internal rhythms and sudden last rhyme, and not least the refusal to say goodbye in a poem that is ostensibly about trying to say goodbye.

This is poetry that does not just take time to write; it also expects you to make time to read it.

No, don’t say goodbye yet, Adil Jussawalla. Welcome back!