Chetan Bhagat scratches his head over criticism of his books, and talks of writing as an emotional endeavour 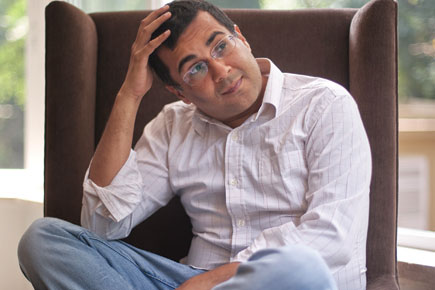 Chetan Bhagat scratches his head over criticism of his books, and talks of writing as an emotional endeavour


Chetan Bhagat has always managed to evoke rather extreme reactions to his books. The janata loves him, but critics pooh-pooh his pedestrian language. Love him or hate him, you just can’t ignore him. Ever since his first novel, Five Point Someone, appeared in 2004, he has managed to pen books that he insists capture the “pulse of the youth”. His latest, Revolution 2020, takes on corruption and is a love story that he feels the reader will relate to completely. He talks of dedicating his life as a writer to understanding people:

Q What is your earliest reading memory? How has it shaped your writing?

A I remember reading Enid Blyton. There was this character of a rabbit, which ran down chimneys and ate sausages. I was fascinated, even though I had no clue what a sausage was. The writing was so compelling that I wanted to be that rabbit eating that sausage. It made me realise that I was taken in by fascinating stories told well.

Q As an investment banker, what books did you read?

A That was my non-fiction phase. I read a lot about world economies, and why these changes were happening all around the world. I used to think it would help me in my job. But if I had that rare evening free, I would read a Devil Wears Prada, and if the Twilight series had been out then, then maybe I would have read that. I also read a lot of fiction about the banking industry.

Q How would you describe the genre you write? What made you choose this genre?

A I would describe it as a genre full of human drama and humour. My investment banking boss had told me that I not only understand finance very well, but I also understand people. But I was never as interested in finance as in people. Most of my stories are about ordinary people. They are not mysteries, and they still become page-turners. They are just about ordinary people, and that’s what I like writing about. My books are a deep understanding of humanity. I have a long way to go, but my main aim in life is to spend time getting to know people.

Q Your themes have always been relevant and your characters easy to relate to. What kind of research do you do?

A I have now dedicated my life to knowing the zeitgeist. Take Revolution 2020, for example. I started writing this book about corruption two years ago and now, when it has released, corruption is the buzzword. I am obsessed with the general mood of the youth. Why are we just obsessed with elite institutions like the IITs? We should try fixing loopholes in the education system. I realised all this speaking to the youth, and noticing corruption in private colleges. I also went to Varanasi, took rickshaw rides around the place and spoke to people. I wanted it (Revolution 2020) to be a modern take on the city.

I also realised a thing or two about love in the small city. They don’t know what it means. They are confused about it, as the concept is very new to them. So they become very vulnerable and that could be dangerous. Most of my characters are blends of people I have met, some are modified versions, but some are really real people.

Q You’ve often been criticised for your writing style. But it works for the masses. Why?

A This country wants to work like a country club, where a few people have a monopoly over who is invited in. I broke the laws. So, boys and girls, the club doesn’t exist anymore. Get used to it. I think my writing works because it’s genuine. The language resonates with the masses and they connect with the characters. Comments have already been flowing in on my blog about my characters. That’s what I am happy about. I don’t even understand what’s wrong with my language. I have asked people to tell me what is good English and bad English, but they can’t articulate it. You can say you don’t like it, but don’t say it’s inferior because of your criteria. Classy people don’t follow this club culture.

Q What kind of schedule do you set for yourself? Do you get writer’s block?

A I chop the novel up and dedicate a few hours every day to it. Sometimes I go away to Delhi or Goa. I have to set deadlines, because if I don’t write for a few days, I feel guilty. Sometimes, expectations bother me. But then I detach myself and write something completely different from my last book.

Q Has a book review ever made you doubt your writing?

A One reviewer compared me to ketchup and that was a huge compliment. That’s exactly what I want to be. Ketchup has such flavour and taste that everyone likes it, but it won’t win any gourmet awards. I am okay with that. To be relevant to so many people is amazing. I used to get bothered after my first book, but now my skin is three inches thick.

A Literary novels entertain a very small percentage of the audience and you need a certain set of language skills for that. What would be right to say is that I want to ‘mass entertain’.

Q Another popular writer, Sidney Sheldon, once said, “The part of my writing I find the most rewarding is when people write to me or speak to me in public to tell me how his or her life has been changed by my books.” Has this ever happened to you?

A It happens all the time. I write about youngsters who are not doing anything in their lives, but by the end of the book are transformed. Many people come to me and tell me they don’t want to give up on life and love after reading my books. Let me give you a great example. A Sardar gentleman whose daughter wanted to marry a Keralite came and told me that he had developed a heart problem stressing about this. After he read my book 2 States, he realised it was all good. But he wasn’t sure his relatives would understand. So he put up a stall during the wedding that had 500 copies of 2 states. He wanted everyone to read it. I don’t think people should read a book with a red pen in their hands. What’s the point? That’s like looking at the sunset and trying to analyse it.

Q Edgar Rice Burroughs once said, “I have been successful probably because I have always realised that I knew nothing about writing and have merely tried to tell an interesting story entertainingly.” Do you relate to this?

A Yes and no. I think what he is trying to say is that if you are too self-conscious about your work, you miss the point. And writing fiction is emotional and you have to think emotionally. If you are talking to your lover and thinking about how your English teacher would want you to profess your love, you are not a great lover, are you?