The burden of traditional expectations. Unscrupulous doctors. New-age medical technology. This is not Dan Brown, this is real India 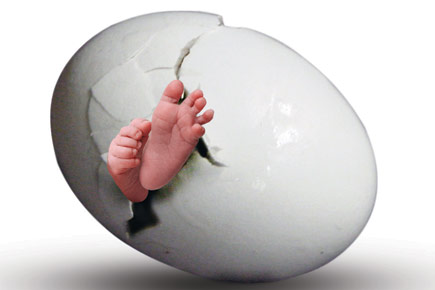 Unscrupulous doctors. New-age medical technology. This is not Dan Brown, this is real India


The treasured organ of motherhood, the womb, is also the hated site of the monthly period, disease, unwanted pregnancy and uncontrolled, fatal bleeding. More treacherous than all these is the physical and mental morbidity caused by medical interference in cases of infertility. Anitha Jayadevan’s description of unscrupulous doctors who will go to any lengths to confer the status of ‘biological motherhood’ on a woman has been recently published.

At the age of 23, Anitha married in a traditional Hindu ceremony and moved into her husband’s home where she adjusted quickly to a joint family. A year after marriage when she failed to get pregnant, the couple consulted a gynaecologist (in the town of Patttambi in Kerala). From this point of ‘no return’ that she placed herself in both mentally and physically, Anitha suffered eight never-to-come-again youthful years of her life trying to bear a child.

After a series of medical splutters (confused diagnosis, hormonal stimulation, infection, the removal of one ovary and a lot of pain), seven years later she was pregnant with twins. The doctors had used an advanced method of Assisted Reproductive Treatment to enable healthy sperms from her husband to fertilise her ova. The reason for using such an expensive procedure was never explained. Within two months of conception, infection set in, leading to life-threatening abdominal sepsis. Anitha was shifted to another hospital in Thrissur where a safe pair of surgical hands managed to save her life. Neither twin survived. One, however, had stayed long enough in her womb for the family to see its dead remains.

It was subsequently found that the couple had been duped: Anitha had all along carried twins conceived from a donor sperm and a donor ovum, which had been injected into her during treatment. In other words, her womb had been used to house children that came from unknown parents. She had become a surrogate mother without her knowledge.

The family tried to confirm it through a DNA test on the dead foetus. But the doctors grouped together to prevent it and the remains of the foetus were buried. At no stage before the treatment did the doctors indicate that surrogacy was the only alternative possible in her case. And indeed it wasn’t. Anitha later gave birth to a child without the help of any treatment.

This story might sound like a Dan Brown-type medical thriller, but it’s not. The negligence and malpractice surrounding the case are true and not uncommon. Most victims do not speak out for various reasons but Anitha is one plucky woman. She decided to fight in court. She also questioned the government on policies that allow such unethical medical practices to thrive. She wrote to local MPs, MLAs, ministers, the Lok Sabha Speaker, members of the Cabinet, the health minister, the Prime Minister and the President. Many expressed concern and assured her that legal loopholes would be addressed. But similar incidents continue to happen in many infertility clinics around the country.

Anitha’s case is not merely one of gross medical malpractice, but also pertains to the social milieu in which she lives. She portrays in detail the medical nightmare which marred eight years of her life, but she blanks out the role of a narrow and traditional society which contributed to her suffering.

The unethical conduct of the doctors who treated her, their callousness, malpractice and negligence must be addressed and the culprits punished. That this should happen in Kerala, the land of 100 per cent literacy is not quite so unexpected for anyone who has lived and worked there. Kerala produces some of the best minds in India. It is also the home of hidebound tradition which can subject people to mental and emotional cruelty that cuts across the three religions prevalent in the state. Ten years ago, I worked as a surgeon in Idukki district of Kerala. I am still haunted by the remembrance of how gullible people were, and how helpless in the face of unfair medical practice like the use of drugs after expiry date or the bullying of women into having needless Caesarian sections.

Anitha’s story needs to be seen in this context of public gullibility and social values: she does not appear to regret giving up her job (why does she give it up?) when she marries. In fact, she does not say anything about her job but there is the passing mention of her ‘love for Malayalam literature’ and the teaching profession in which she had done her Masters.

If getting pregnant within a year of marriage is common, not conceiving for three to five years after marriage is also normal. A good gynaecologist will advise against early medical interference. In Anitha’s case, doctors, including members of the family Anitha was married into, encouraged her to persevere. Even when things began to go seriously wrong and she was subjected to severe pain, stress and uncertainty, no one intervened or applied the brakes.

The mercenary intentions of the ‘specialists’ were obvious. But Anitha and her husband stayed passive, obeying the laws of society rather than thinking independently. And they sacrificed the first decade of their married life to blind hopes, bad planning and anguish.

There are sound medical reasons against early tampering with the body’s equilibrium. A woman’s ability to conceive depends on the hormonal balance in her body. External factors like emotional stress, strenuous physical activity, drugs and nutrition can upset it. The pituitary gland which nestles beneath the brain controls the nature and amount of sex hormones. This tiny gland is extremely sensitive to emotional strain. The stress a young woman faces in the initial period of married life can only be imagined by those who don’t have to experience it. In an arranged marriage, she suddenly finds herself in the arms of a stranger, in a home full of strangers, all of whom she must trust. Most young women manage to fit into the role (all credit to them). The emotional strain may, however, temporarily upset the chemistry within. And the moment a couple begin to think of themselves as infertile, the stresses accumulate and hormones go shooting off in wrong directions.

At no time during this ordeal or after did the couple consider adoption, though there are numerous positive examples of its benefits. Tradition-bound couples understand this particularly well when given examples, including two from mythology: Sri Krishna was an adopted son of Yashoda and Sita, the adopted daughter of King Janaka. Here, mythology shows no sex discrimination. Such lessons that are buried in legends are often ignored and other regressive tales are held up as examples to follow.

Looking at her own experience ten years from now, Anitha will realise how she tamely submitted her mind to patriarchal conditioning: to be a virtuous wife and mother. Did anyone suggest she continue studying literature, enjoy her job and give her young body a chance?

The fact that Anitha lived to tell her story is miraculous. I hope she continues to fight the injustice meted out to her. Medical malpractitioners must be exposed; and society must introspect on situations like Anitha’s where a young woman nearly lost her life in the quest for ‘biological’ motherhood.

Kavery Nambisan is a surgeon and novelist. Her last novel, The Hills of Angheri (Penguin India) is about success and failure in the life of a doctor