The thrilling adventures of a fearless robber, with cameos by Jim Corbett and General Dyer. 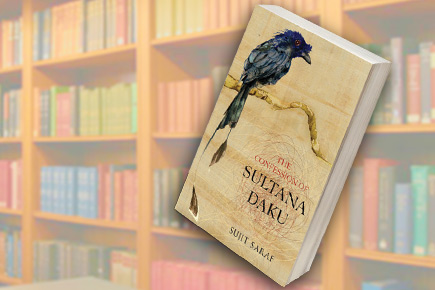 The thrilling adventures of a fearless robber, with cameos by Jim Corbett and General Dyer.


This story has almost everything: royalty, romance, bandits and policemen, fighting, escapes, torture, magic, songs and dances—in short, the works. The one thing it lacks is a happy ending. Even so, it should be a good story. But is it?

It’s the July of 1924. Lieutenant Colonel Samuel Pierce, Officer Commanding, King George’s Own Bengal Sappers and Miners, receives a summons of sorts from Sultana Daku, hitherto Rohilkhand’s most dreaded dacoit, now sentenced to death, the night before the latter’s execution. Pierce spends the night listening to the autobiography of Sultana, addressed to the dacoit’s young son, and writes it down in the dim light of a lamp. The narrative is interrupted from time to time with bits of Pierce’s own diary, for Pierce and Sultana have crossed paths a few times.

Sultana is a Bhantu: he belongs to a caste that claims descent from Maharana Pratap of Chittorgarh. They are thieves and robbers, skilled with knives and swords, able to see in the dark with the surma they apply to their eyes, and communicating by mimicking the calls and cries of birds and animals. And they are utterly ruthless. Sultana learns his Bhantu ways from his paternal grandfather, a feared bandit. The grandfather, Dada, has failed to teach his own son the ways of a Bhantu, and, after the son’s passing, decides that little Sultan will learn the right way.

The boy grows up in prison—the grandfather has turned himself in to try and get his daughter-in-law, Sultan’s mother, to a safe place in time for childbirth. The child is plucked from the womb by a white police officer, and named Sultan by his grandfather, who thinks he will grow up to be the king of dacoits. Sultan grows up in a prison run by the Salvation Army (altogether gentler than the regular army or the police). Here, prisoners are given day-passes, permitted their freedom as long as they return to custody every evening. Inmates learn to repair roads, work in the fields, build huts, and generally be useful, instead of pursuing the native activities of their caste.

Yet Sultan learns his native craft well. He shows his leadership qualities early, gaining his first follower Bhurey before he is ten years old. A few years later, Sultan, now leading a ragtag company of youngsters, goes to Delhi and raids the train of none less than King George V—George Pancham to Sultan—and makes away with his crown, through the hole of the King’s toilet. The boy has to jump into the Yamuna to escape, and unable to swim, loses the crown, which reappears on the King’s head. But the police come looking for the group of boys they suspect of having intruded on the King’s train, and Sultan is on his way to becoming the dacoit king. He believes he is aided by Goddess Kali, who sends him portents through dreams.

Sultana’s life is so packed with incidents, in fact, that his youth at the end of it—he is closer 25 than 30 at the time of his execution—comes as a surprise. His domination of Rohilkhand, which lasted four years, must have begun when he was barely twenty. Perhaps, the most revealing incident is Sultana’s meeting with Makdoom pir, a holy man to whom Sultana’s wife Putli went when she found herself barren. Putli bears Sultana a son, but Bhurey’s wife miscarries. Sultana asks the pir his future, and the pir foresees all will be well. Then Sultana tells the pir that Putli and Bhurey’s wife came to see him a while ago, and Makdoom took the child from the womb of one and put it in the other. Makdoom’s prophecy changes instantly: Sultana will meet a bad end, he says, especially if he tries to hold the child. Sultana, who has seen his son only once, when the boy is a year old, decides never to try to see him again. This belief in prophecy colours the entire narrative.

The title doesn’t sound quite right. Sultana is a large raisin or an empress, definitely feminine when applied to a person. It’s not a name to give a fearsome dacoit. There are other little glitches, too, the use of ‘joss stick’ instead of ‘incense’, for instance, and the occasional confusing sentence, like grit in an otherwise good sandwich.

But the story is based on a real person, and there are limits to how much research can be done, and how much it will tell. It’s a good tale, told reasonably well, that would have been better still without the glitches.