It’s alarming that this book got nominated for a mighty prize. 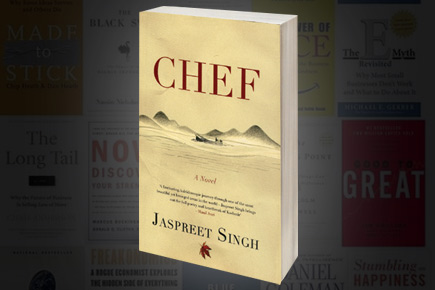 It’s alarming that this book got nominated for a mighty prize.


Chef, a novel by the Canada-based research scientist and writer Jaspreet Singh, is like a Karan Johar script gone horribly wrong. A lead character with cancer, a wedding and a funeral, it could’ve been titled Kal Khushi-Gham, Ho Na Ho. Just to clarify, this reviewer is not a fan of Karan Johar. Undoubtedly unintentional, here are the parallels: Kirpal ‘Kip’ Singh, a Sardar military chef returns to Kashmir to cater for the wedding of the daughter of a Hindu general. She is about to marry a Pakistani Muslim. There’s a suspected Pakistani female terrorist thrown in for added flavour.

After boarding a train to Kashmir, Kip uses it as a narrative-device to shuttle between the past and present. He’s transported to the time when he apprenticed under Chef Kishen, learning how to pound out gostabas, stir up rogan josh and how chana pairs well with Brie and parsley.  En route, current events crash in like uninvited guests: Coffingate, the nuclear deal, Hazratbal and hotels converted into torture chambers. On the story board are a smattering of characters yanked out of newspaper headlines: Dr Jagdish Tytler, Mr Modi, even a Bina Ramani, without any indication of their reality.

Trainee Kip views women’s bodies as grocery items. They have ‘skin the colour of cinnamon, eyes that glow like tamarind pods’ and a nurse’s mole is like ‘cardamom’. More than the masala, the ingredient that you can smell the most is smut, odoriferously swinging between homo-erotica and juvenile adolescentia. One sampling and our nomination for the bad wazwan award: ‘The carrots were fucking the earth, the carrots and onions were having better sex than me…Gulmarg salad licked walnut chutney in public…’ Maybe that’s because Chef Kishen’s divided the vegetable world into genders. For Kip, ‘garlic is woman, avocado is a man and coconut is a hijra’. Though desperate to get it on with anything, Kip doesn’t. Aie, Aie, Aie.

Mighty authors like Mark Kurlansky and Manil Suri have posted positive blurbs for Chef. Not to mention, it was shortlisted for the 2009 Commonwealth Writer’s Prize. But where we’d hoped Singh would proffer Proust’s madeleines, soft, spongy and scented with memories, we get stale bakerkhanis. More than evocation, only dislocation could spawn this prose: ‘The valley looks like Swiss cheese, with big holes where the Hindu houses were’. Cheese and ethnic cleansing? This could have been a better book. If only Singh had lost it at the movies.