An Absent Memory of a Community

In her book, Sindh: Stories from a Vanished Homeland, Saaz Agarwal explores why the region continues to remain a collective blind spot of Partition, even for Sindhis who fled to India and then tried to erase it from memory. An extract: 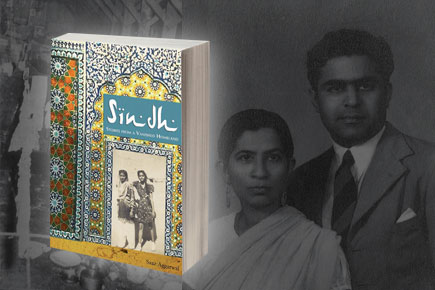 An extract from the book Sindh: Stories from a Vanished Homeland


My mother never spoke about her childhood. I never noticed that she didn’t. Which child imagines their mother as anything but a mother?

I knew from odd snatches of overheard conversation that her family had moved from Sindh to Bombay after Partition. She would say it casually, with a shrug. It was an irreversible reality, something that had happened. No descriptions followed. There were no nostalgic memories or romanticised visions of a lost homeland.

The first time my mother mentioned anything from her childhood, I was 36 years old. It was so unexpected it gave me goosebumps. Out of the blue she was describing scenes from 50 years ago, the bedding used in different seasons: 40-kilo razais for deepest winter, 20-kilo for mere cold weather, and thick-spun khes and thin cotton sheets for when the burning heat would drive them out to sleep in the courtyard on rows of cots placed side by side. I listened, rapt, feeling closer to six years old than 36. “When I close my eyes, I can see those places as clearly as if it was yesterday,” she said.

When we started working on this book together in late 2011, I saw for myself how vivid her memories had remained— so vivid that I could soon see those places with striking clarity myself. I was astonished by the way she was able to interpret her memories in the backdrop of historical events of a time when she had been so young.

Trying to learn more, I sent out an email asking for information about Sindh just before, during, and just after Partition. I received replies from a number of people—indicating sources which describe the Punjab Partition experience, which is far better documented. When I mentioned my new project, someone I know in Pune said excitedly to me, “You know—all the prime real estate all over the country belongs to the Sindhis! They got huge acres of land from the government! All of Sindh Society in Aundh—the government gave it to them!” Other friends told me of similar cases where people actually believed that Sindhis had grabbed land for themselves. They had no idea that Sindhis had in reality lost everything they had at Partition; that many had not bothered to wait in line for government compensation. It was as recently as 2008 that the Government of Maharashtra gave ownership rights to some who had settled and made their homes in the erstwhile refugee camps. Even the widely-read Freedom at Midnight by Larry Collins and Dominique Lapierre does not mention the province of Sindh. It describes the Partition of India in extensive detail, delves at length the plight of Punjab and Bengal, includes the important role Karachi, Jinnah’s home and the first capital of Pakistan, played in the events of the time. But not one word about Sindh.

Reading about Sindh, reading descriptions of the place my grandparents lived in and the people they knew of made me try to see the events that changed their lives through their eyes, and this made me feel much closer to them. I can’t say, however, that my new knowledge of Sindh made me feel part of the community.

The truth is I had never considered myself a Sindhi.

It wasn’t just that my father was from another part of the country, with a different language, food and customs. It wasn’t just that my brother and I had grown up in yet another state and with an education that imposed homogeneity on us. It wasn’t even my formative years in Bombay, a city where it was really only your skills and productivity that defined you. Like most people I knew, I’m afraid I nursed a stereotype of Sindhis as loud-mouthed, overweight, uncultured, shrewd and opportunistic—even though my own grandparents epitomised the very opposite of each of these attributes, being soft-spoken, physically trim, trusting and even rather naive, and never expecting anything in return for favours done. They were culturally sensitive enough to absorb into the family sons- and daughters-in-law from other communities, and my grandfather was dedicated to the pursuit of knowledge till the day he died.

Even now, trying to examine and describe the community of Sindhi Hindus as objectively as possible, it’s hard for me to separate the stereotypes from my own perceptions.

Out for dinner a few days ago, it was difficult not to notice a young man sitting alone at a table with a bottle of beer. He was leaning back in his chair and his legs were sprawled out wide as he talked loudly in Sindhi into a cell phone. I still can’t decide whether my revulsion at his crude behaviour is outweighed by my gratification that there are indeed young Sindhis in India who can speak their mother tongue fluently.

Over the years, my mother retained a loyalty to her Sindhi roots despite any number of cultural superimpositions. It was only recently that I experienced for myself what the excision and denial had done to her. “Our families come from five villages in Larkano district,” she told me, and, thinking hard, she slowly named them as I typed into my laptop. The fifth name eluded her. “I’ll get it!” she promised, “I’ll think and tell you.” And then she shook her head and said, regretfully, “There’s no one left who can tell me that name.”

When I keyed the four names into my Google task bar, which promptly threw up the fifth, her amazement showed me that to her mind, those villages had simply stopped existing when she and her family left Sindh, never to return. Learning about Sindh, and interacting with people who live there now, was a process of emotional drama and discovery, lifting heavy veils that had obscured me from my family’s past. I soon realised that this was just the softest of echoes of the terrible separation of India into two parts. A pencil line had been drawn by superficially-concerned parties; it had unleashed pain and tragedy. What I was feeling was only the mildest of its dying tremors. After Partition, after the massive migrations had ceased, impenetrable walls had appeared. It wasn’t just people who couldn’t cross the new borders—information wasn’t getting across either. Nobody knew what was really happening on the other side. For my mother, Sindh had ceased to exist and become a place she held only in her mind. Did it bring closure to learn of incidents and changes that had taken place in that distant place of dreams in the last 65 years? I’m not sure. But in this book we have used her childhood memories, and those of others who had different representative experiences, and tried to recreate that lost world for others who might want a glimpse of it.